An international team of researchers has found a new natural anti-HIV defense. 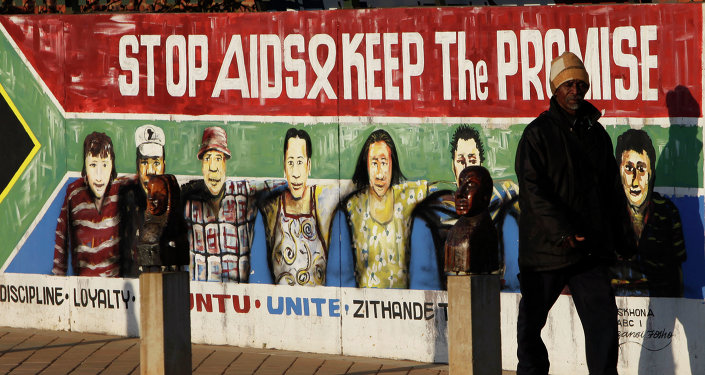 © AP Photo / Denis Farrell
Experimental Drug Could Be AIDS “Vaccine” Breakthrough
The discovery, published in the latest issue of the Journal of Biological Chemistry, pinpoints a protein, ERManI, that doesn't allow reproduction of the HIV virus, which causes AIDS.

"In earlier studies, we knew that we could interfere with the spread of HIV-1, but we couldn't identify the mechanism that was stopping the process," said associate professor of microbiology and molecular genetics in Michigan State University Yong-Hui Zheng, who worked on the study in collaboration with scientists from the Harbin Veterinary Research Institute, the Chinese Academy of Agricultural Sciences and the University of Georgia.

Now that the researchers have discovered that ERManI, it will be a a fundamental key and could potentially be used as an antiretroviral treatment.

Unlike vaccines, antiretroviral treatments make sure the virus is harmless by keeping it in check at low levels. According to Zheng, the scientists are now planning to conduct trials to find out whether HIV resistance can be stimulated by increasing the levels of ERManI.

© Flickr / UNICEF Ethiopia
HIV Miracle Pill Really Works! No Virus Contraction in 2 Years, Doctors Say
Most viruses have protective skins with viral glycoproteins on the surface, known as Env spikes, which lead viruses to binding sites that allow infections to spread at the molecular level. The scientists from Zheng's laboratory have shown that HIV-1 envelope glycoprotein biosynthesis can be deliberately inhibited by ERManI protein which will slow the spread of the virus.

Thus far, no cure exists for HIV-1, and those infected have to take prescribed medicine for a lifetime, and not without unpleasant side effects. However, antiretroviral therapies can significantly prolong life.