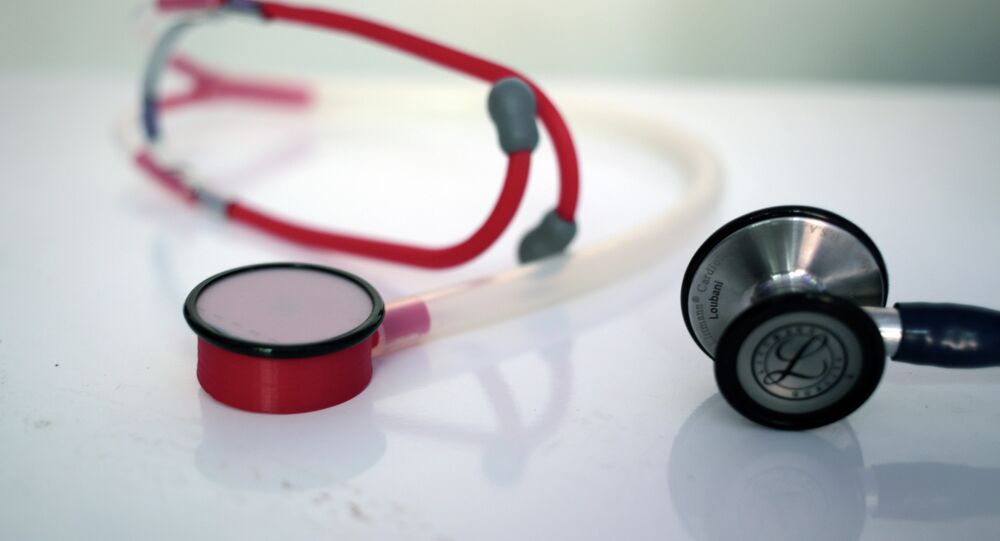 Anyone with a 3-D printer can now print off a stethoscope that functions just as well as its expensive analogues. Developers say the news could be huge for doctors in war zones and developing countries.

Instruments of war printed in 3-D have fired their first shots, but never fear: a tool of peace – a shockingly inexpensive stethoscope — has been designed by a Palestinian-Canadian physician.

I already have an AR15 but I want a 3D printed "ghost gun" just to piss of the #NotOneMore / #WhateverItTakes / #gunsense dummies.

Dr. Tarek Loubani worked as an emergency physician at the Gaza Strip’s main hospital Shifa during the 2012 Israeli incursion, when medical facilities were suffering from severe supply shortages.

“I had to hold my ear to the chests of victims because there were no good stethoscopes, and that was a tragedy, a travesty, and unacceptable,” Loubani told the Chaos Communications Camp in Zehdenick, Germany.

© AP Photo / Khalil Hamra
In this Monday, Sept. 7, 2015 photo, Dr. Tarek Loubani, a Palestinian-Canadian doctor, poses for a picture with 3D printed stethoscope around his neck, in Gaza City.
© Sputnik / Alexei Danichev
Futuristic Novelty: Russia Prints UAV Using 3D Printer
Conditions have scarcely improved, so news of the arrival of the 3-D printed stethoscope, and other medical instruments to come — like pulse oximeters and needle drivers — within the framework of Loubani’s Glia Project, is more than welcome in hard-hit places like Gaza.

The new stethoscope is reportedly comparable to the market standard, 3M’s Littmann Cardiology III, which runs between $150 and $200.

“I have used it on many of my patients in the emergency department and can attest to the fidelity of the sound,” Dr. Jonathan Dreyer, research director of emergency medicine at the Schulich School of Medicine and Dentistry at the University of Western Ontario, told the Associated Press, adding that the tool is “as good or better” than the Littmann Cardiology III.

The Gila Project stethoscope is available for free download online, even though research and development of the device cost Loubani, who self funded, more than $10,000. The cost of a single 3-D printed stethoscope is expected to be no higher than $2.

“The goal here is self-sufficiency, and so the plan for Gaza and other underserved areas is to have 3D printers there,” Dr. Loubani was quoted as saying by Wired Magazine.