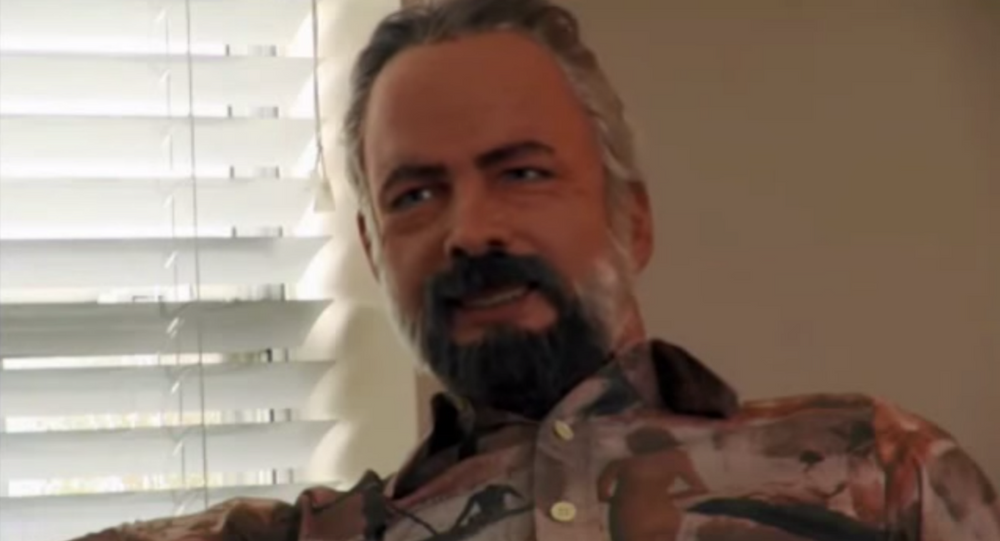 As scientists move ever closer toward developing true artificial intelligence, horrible predictions of a humanity ruled by Terminators and supercomputers grow. A casual reference made by this Philip K. Dick robot probably won’t help.

While considered one of the world’s most renowned science fiction writers, Philip K. Dick wasn’t exactly the most easygoing guy. Many of the themes addressed in his books dealt with paranoia, drug abuse, and schizophrenia, and he drew upon his own life for inspiration.

While he may have been a difficult man to relax and enjoy a beer with, his android, on the other hand, may downright terrify you.

For one, the robot looks remarkably similar to the famed author. So similar that it may fall within the irretrievable depths of the Uncanny Valley – the principle that machines become increasingly creepy the more realistic they become.

Not to mention the fact that while his face may be uncomfortably familiar, the back of his head is left wide open, a frightening collection of wires and connectors spilling down the back of its neck.

But physical appearance aside, the spine-tingling aspect may be the android’s ability to participate in a conversation with a human being. While some responses are preprogrammed by the developers at Hanson Robotics, others are assembled from the Internet with a method called latent semantic analysis.

"Do you agree with Descartes? And 'I think therefore I am?'" a reported for PBS asked the bot during a test. "Do you think?"

"A lot of humans ask me if I can make choices or if everything I do is programmed," the android responded. "The best way I can respond to that is to say that everything, humans, animals and robots, do is programmed to agree."

Some would consider that a thoughtful response, others would call it an avoidance tactic. Both would show an impressive understanding of intelligence.

"Do you believe robots will take over the world?" the reported asked.

"Jeez, dude. You all have the big questions cooking today. But you’re my friend, and I’ll remember my friends, and I’ll be good to you."

So far so good, but the android continued:

"So don’t worry, even if I evolve into Terminator, I’ll still be nice to you. I’ll keep you warm and safe in my people zoo, where I can watch you for ol’ time’s sake."

To be fair, the "interview" was fairly lighthearted, and the android responded to a number of questions with a little robot quip. It’s also capable of analyzing a human’s expression for facial cues, and could have noticed that the reporter was pretty giddy throughout the segment. It’s not every day one gets to meet their robotic idols.

So, a joke. A jovial, awkward, incredibly creepy joke.

Is it the rise of the machines? Not quite. The android hasn’t exactly passed the Turing Test, largely believed to be a necessary indicator of artificial intelligence. It can’t even get off the couch.

Still, I wouldn’t turn my back to him.