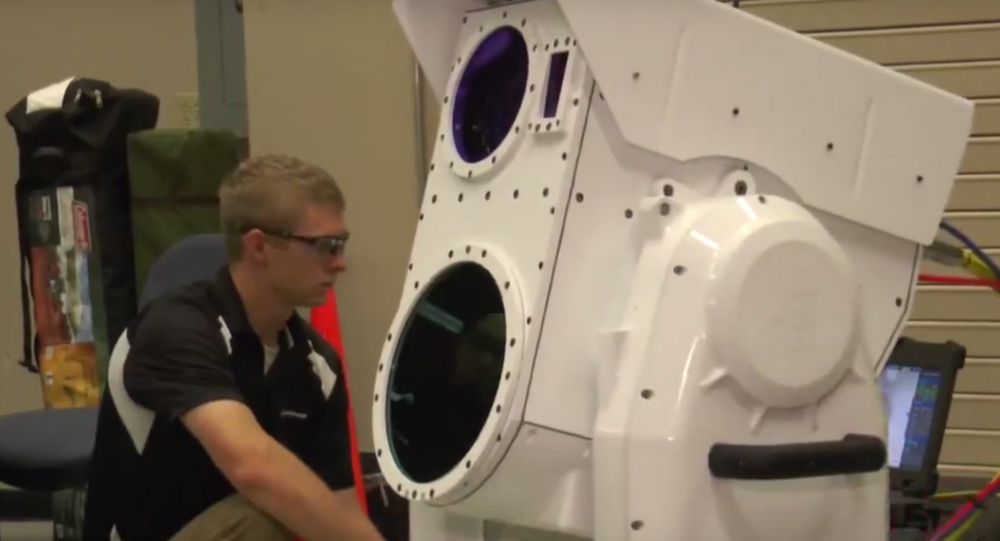 With an ever increasing number of recreational drones crowding airspace, Boeing may have a solution. The company has developed a working laser cannon specifically designed to take down wayward UAVs.

Perhaps most famously, there was the quadcopter which a drunken government employee plowed into the White House lawn. That incident sent the Secret Service into a panic. But there have also a number of instances in which small drones have come dangerously close to commercial aircraft.

A number of solutions have been proposed, from high-tech geofencing which would make it impossible for drones to even enter restricted areas, to targeted jamming technology capable of sending a trespassing UAV back to its pilot.

But while those ideas focus on defensive measures, manufacturing giant Boeing has a more offensive solution: laser guns.

The company unveiled its Compact Laser Weapon System in Albuquerque on Wednesday morning and showed off the new tech with a fairly impressive demonstration.

A scaled-down model of Boeing’s High Energy Laser Mobile Demonstrator designed for the US Army, the CLWS is capable of burning holes through a recreational drone with a two-kilowatt infrared laser beam in as little as two seconds.

"This represents a low-cost way to deal with the threat," David DeYoung, director of Boeing Laser & Electro-Optical Systems, told Wired.

Boeing has refused to release any specifics about the weapon’s range – or price – but one of the most impressive features is just how accurate the laser beam can be. The weapon is designed to be able to target specific areas of the target, to customize any attack based on the threat posed.

If users wanted to force a crash-landing, for instance, the laser could be pointed at a UAV’s tail section. If it’s safer to just annihilate the drone in midair, that can also be accomplished.

The device is also surprisingly easy to use. Its small size makes it quick to set up, and once the laser is positioned, it’s easily controlled with a standard, run of the mill Xbox controller. A laptop outfitted with targeting software can also be used for automatic tracking.

The device would also require very little ongoing costs. With minimal upkeep required, and ammunition not being an issue, the laser’s only real cost would be the electricity required to create the beam. Given that the laser can fire a couple of rounds on nothing more than a portable battery pack, electricity costs also remain surprisingly low.

The weapon could be available within the next two years, and from there could become a mainstay in airports across the country. In theory, vaporizing a few Sharper Image quadcopters should convince others to fly their toys in more appropriate areas.