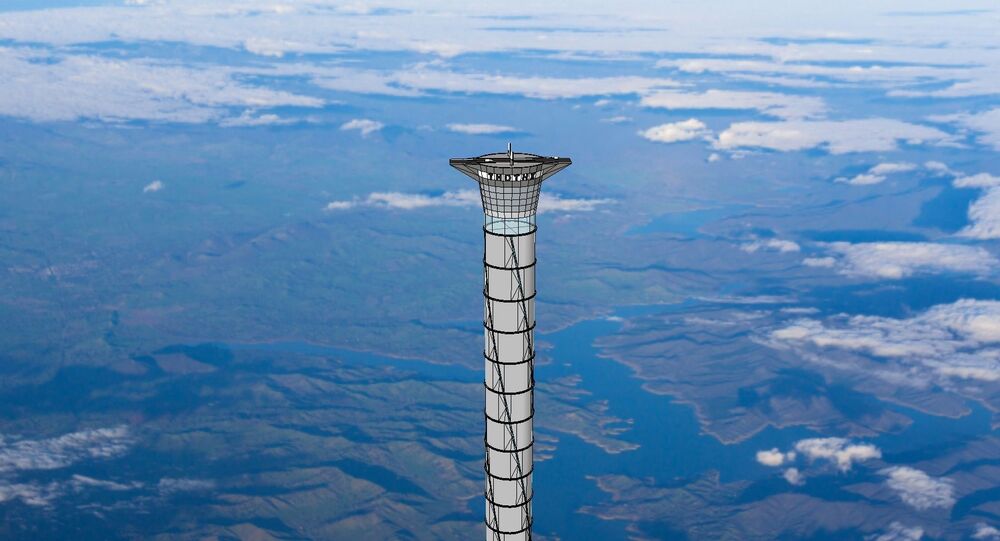 A Canadian company has earned a US patent on a free-standing, inflatable 12-mile-high elevator that may revolutionize the future of space travel, and may even provide new opportunities for tourism.

© Flickr / NASA Johnson
Could Platinum and Rocket Fuel Be Mined From Asteroids in Just a Decade?
Thoth Technology Inc. is a private Canadian company which normally specializes in miniaturized and light-weight gadgets for outer space. But the space company is now aiming for something much bigger, and has just earned a patent to make it happen: A 12-mile-high elevator structure that will make the current tallest building in the world – Dubai’s 3,000 ft high Bourj Khalifa – seem tiny in comparison.

According to Fastcoexist.com, the pneumatically pressurized space elevator will consist of shafts that are made up of inflatable segments, and will have cars running up and down the tower. Instead of using cables, however, these cars will run on either wheels or an electromagnetic drive.

The purpose of the project, according to a statement released by Thoth, is to design a more efficient way to launch astronauts into space than rocket-ships.

"The technology offers an exciting new way to access space using completely reusable hardware and saving more than 30% of the fuel of a conventional rocket," the statement read.

Thoth Technology Inc.
The 12-mile-high elevator will be designed to take astronauts up to the stratosphere before launching them into outer space.

The idea is that launching payload from a platform that is already 12-miles over the Earth’s surface will require significantly less energy. By contrast, rocket ships expend a lot of energy, as they "must counter the gravitational force during the flight by carrying mass in the form of propellant and must overcome atmospheric drag," inventor Brian Quine explained in the patent.

Instead of carrying mass to propel them into outer space, the elevator will take astronauts to the stratosphere, beyond the so-called "Armstrong Limit," where atmospheric pressure is extremely low, from where they can be launched into the orbit.

Thoth CEO Caroline Roberts has high hopes for the project, saying it will revolutionize space travel, and how we think about it.

"Landing on a barge at sea level is a great demonstration," she said. "But landing at 12 miles above sea level will make space flight more like taking a passenger jet."

What’s more, the patent suggests that the new project provides opportunities for tourism. For instance, the structure’s platforms could house hotels, with incredibly views from varying altitudes. The tower can also be used by skydivers.

Thoth isn’t the only company working on a space elevator, the idea has long been considered as an alternative to rocket ships. It has gained so much support, in fact, that a Space Elevator conference is scheduled for the end of the month in Seattle.  The Japanese Obayashi Corporation also has plans to build a space elevator that can reach a quarter of the way to the moon by 2050.