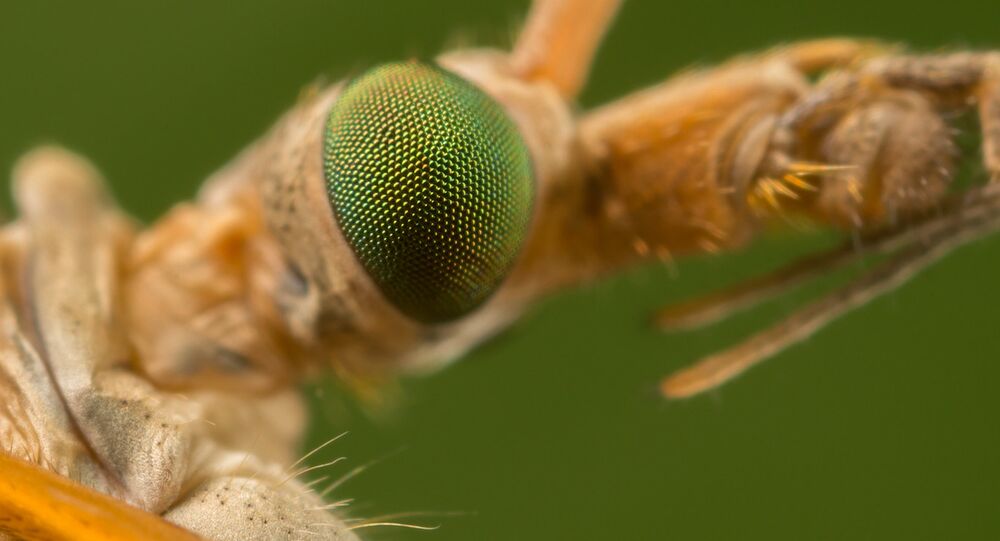 Engineers worldwide have long strived to design an effective compound eye – just like the ones small insects use to evade even the most agile fly swatter – and now it looks as though a team in Switzerland has finally done it. Mini-drones may soon be equipped with the state-of-art visual systems that weigh just two milligrams.

An intelligent systems laboratory at the École Polytechnique Fédérale de Lausanne has developed a lightweight artificial compound eye, which may be used on miniature drones and other vehicles to help them analyze their surrounding optical flow and avoid collisions, according to a recently published article in the Interface scientific journal.

© AP Photo / ILM/Universal Pictures/Amblin Entertainment
Taking a Page From Jurassic Park: Scientists Plan to Genetically Engineer Animals for US Military
The team of researchers headed by Dario Floreano of the EPFL was inspired by insect eyes, made up of thousands of ommatidia, or clusters of photoreceptors, that allow organisms to detect even the tiniest movement and measure its speed and direction, even if there’s not much light.

The artificial version comprises three miniature hexagonal photodetectors, forming a triangle, covered with a single lens. The optical device can focus and work under low ambient light conditions. Information from the three photodetectors streams to a microprocessor, which maps the environment based on gathered images.

“One must not imagine that this is a high quality image,” Ramón Pericet Cámara, the project coordinator, was quoted as saying on the EPFL website. “It is only a three pixels picture.”

© AP Photo / David Tulis
US to Create Bird-Like Drones for Hostage Recovery Operations
Though that may seem small, it is just enough for the elementary eye to accomplish its task: detect objects nearby and the direction and velocity of their movement. Moreover, it’s very energy-efficient, the team says.

On its longest side, the device is less than 2 mm long and weighs only 2 mg, and can be installed on a variety of surfaces. It’s perfectly suited to mini-drones, which need adequate optical systems to be capable of flying without collisions.

“To be relatively autonomous, these flying robots must be able to detect and avoid their surroundings. The biggest challenge was to miniaturize all the components,” said Cámara.

Mini-drones are in demand for surveillance, for instance, during security operations. They can aid rescue teams as well.

The new fly eye may be also someday help the blind by guiding users via a system of vibrations. The team also suggested driverless car technology could benefit from the development.