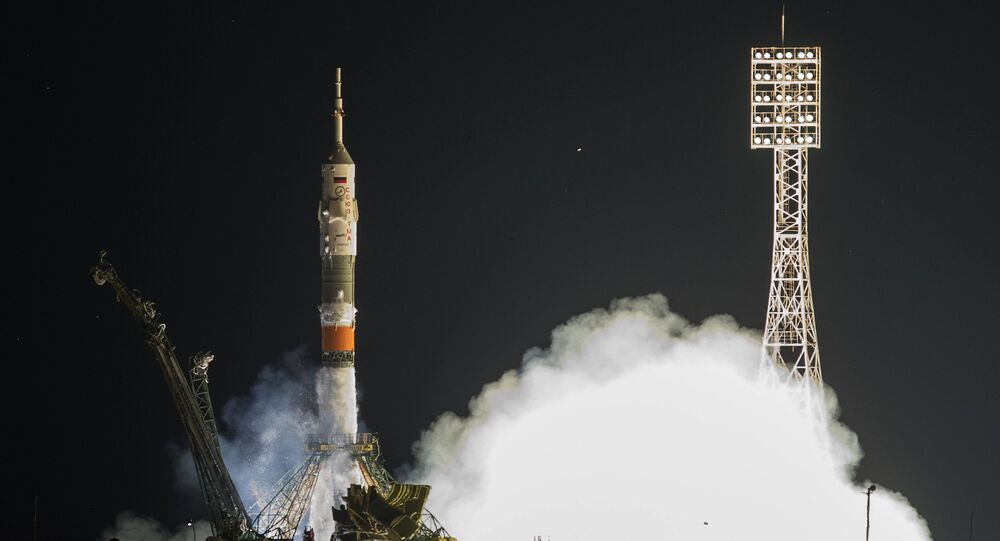 A malfunctioned solar panel array of the Soyuz TMA-17M spacecraft, which has brought new crew members to the International Space Station (ISS), opened during the vessel’s docking with the ISS, a representative of Russian space agency Roscosmos told RIA Novosti.

BAIKONUR (Kazakhstan) (Sputnik) – According to Roscosmos, one solar panel was enough to meet the spacecraft’s energy needs and Soyuz docked with the ISS as planned, at around 05.47 a.m. Moscow time (02:47 GMT) on Thursday.

"The docking to the Rassvet mini-research module of the Russian segment of the ISS was performed automatically," a spokesman at the Baikonur space center in Kazakhstan said on Thursday morning.

© NASA
Russia to Launch ISS Crew First Time After Cargo Spacecraft Loss
The Soyuz spacecraft with Russian cosmonaut Oleg Kononenko, Japanese astronaut Kimiya Yui and NASA astronaut Kjell Lindgren on board had to rely on a single solar array in order to make it to the ISS on Thursday.

Kononenko plans to conduct a series of unique experiments on the ISS, including the testing of a remote control system that could be used in the future to operate space robots located on another planet.

As part of the experiments, the Russian cosmonaut plans to control two robots from the ISS – one located in St. Petersburg, Russia and another in Munich, Germany.

Kimiya Yui will conduct his own series of experiments related to the hypothetical "dark matter" which is invisible but is thought to account for most of the matter in the universe. Researchers are still trying to characterize the type of subatomic particle that dark matter is thought to be composed of.

Initially scheduled for May 26, the Thursday Soyuz launch was delayed after the April malfunction of the third stage of a different variation of the Soyuz carrier rocket, a Soyuz 2.1a, which sent unmanned Progress M-27M cargo ship into an uncontrolled spin.

Progress M-27M burnt in the Earth's atmosphere over the Pacific Ocean after its improper separation from the Soyuz rocket, which was caused by fuel leaks, according to Roscosmos.