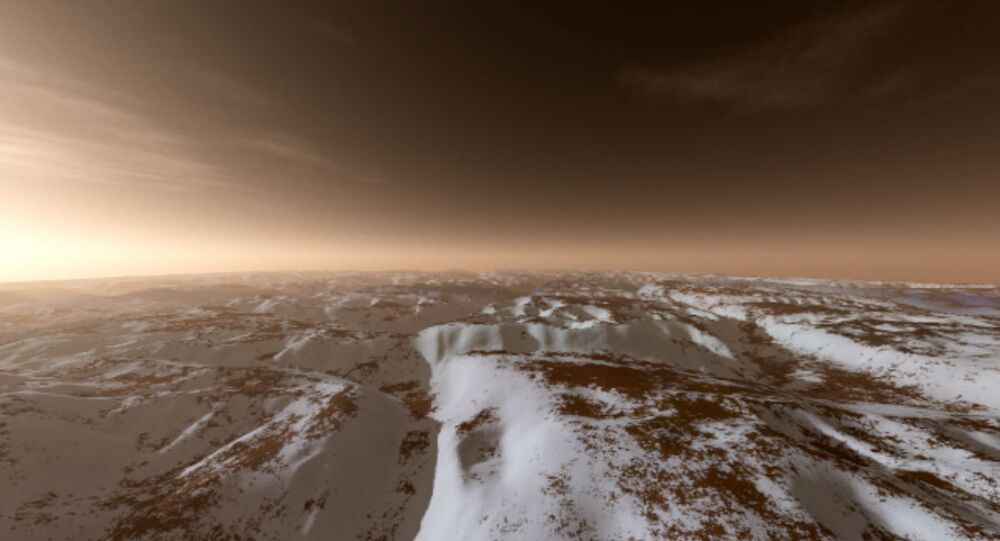 Scientists have long theorized that the surface of ancient Mars could have been covered in seas of liquid water. But what we’ve imagined as a sister planet lush with salt oceans may have, in fact, been a very dry and frozen place.

In April, NASA’s Curiosity rover found the first evidence of liquid water on Mars. Found in the soil of planet once thought to be far too cold, the discovery reinvigorated theories that the Red Planet was once teeming with liquid oceans. Major questions inevitably remained: Where did it go? Could it have contained life? Could Earth one day become as barren as Mars? But for the time being, the general consensus was that 4 billion years ago, the Red Planet could have looked like this:

Massive oceans are thought to be the best explanation for much of Mars’ complex topography. But a new study to be published in the Journal of Geophysical Research, led by Robin Wordsworth, assistant professor at Harvard John A. Paulson School of Engineering and Applied Sciences, proposes that the planet’s valleys and plateaus can be better explained by massive, hemisphere-spanning glaciers.

More like the icy wonder seen on the right:

Half-Hoth, Half-Tatooine, rather than full Naboo, if you catch my drift.

© Flickr / Tom Simpson
NASA Sets Sights on Robot-Built Moon Colony
For one, given Mars’ distance from the sun and that it only receives 43% of the solar energy that the Earth does, the colder option just makes more sense. Three to four billion years ago, that solar energy would have been 25% dimmer, given the young age of the sun.

Creating the warm-weather model also required the scientist to include more caveats into the programming – i.e. play God a bit more. The cold scenario clicked into place more naturally, and it’s reasonable to assume that that would also be the case in nature.

But in comparing the two models, scientists also found that the chillier climate could more easily account for many of the erosion patterns seen on the surface today. The melting of massive icecaps at the equator after a significant shift of the planet’s axis, for example, could explain many erosion patterns better than liquid oceans.

Even when the warm weather scenarios did show signs of erosion, those features did not match what we see on the planet’s surface.

Wordsworth recognizes that the cold model isn’t perfect. It still doesn’t completely account for how the ice would have melted.

"I’m still trying to keep an open mind about this," Wordsworth said, according to Phys.org. "There is lots of work to be done."

And none of this is to say that Mars could not have still hosted ancient, microbial life. The subzero oceans of Europa may be the solar system’s best chance for life – other than Earth – and if extremophiles can make it there, icy Mars would be a cakewalk.