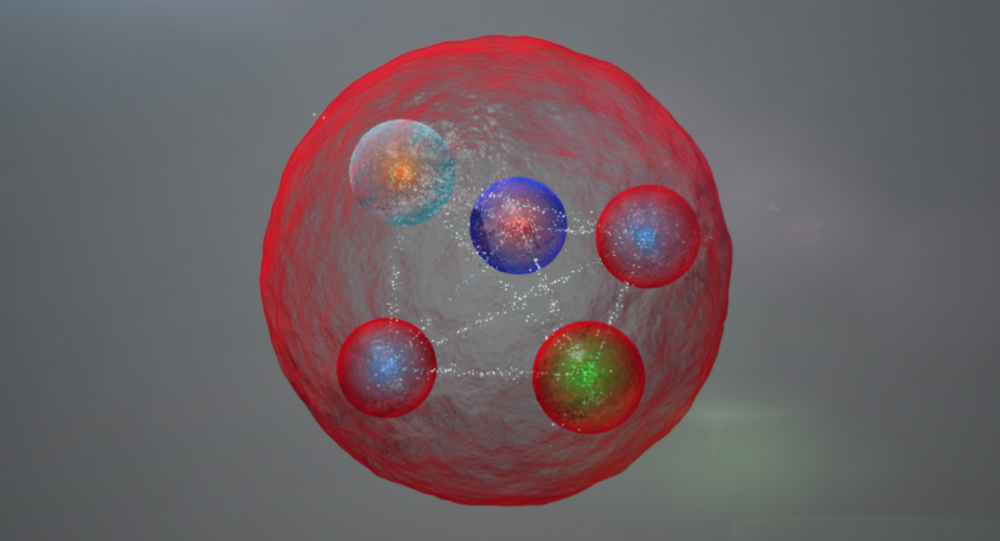 With the Large Hadron Collider back up and running, it’s smashing particles day and night. The machine’s latest discovery: a brand new form of matter known as a pentaquark, composed partially of anti-matter.

The smallest elementary particles we know of, quarks are the building blocks of all matter. Combining into different arrangements, quarks form protons and neutrons, which in turn become atom nuclei. Ever since quarks were first hypothesized in 1964, those theoretical models also predicted the existence of pentaquarks.

That particle has proven extremely elusive. Over the past fifty years, a number of scientists claimed to have found evidence of pentaquarks, but further experiments proved each of those claims wrong.

"It’s just the word 'pentaquark' which seems to be cursed somehow because there have been many discoveries that were then superseded by new results that showed that previous ones were actually fluctuations and not real signals," Patrick Koppenburg, a physicist with CERN, told BBC News.

But now, thanks to the Large Hadron Collider, the most massive scientific instrument ever built, the pentaquark has at last been found.

"The pentaquark is not just any new particle," Guy Wilkinson from the LHCb said in a press release. "Studying its properties may allow us to understand better how ordinary matter, the protons and neutrons from which we’re all made, is constituted."

One of the most exciting parts of the discovery is confirming what, exactly, constitutes a pentraquark. Quarks come in six different varieties, known as "flavors." The pentraquark consists of two Up quarks, a Down quark, and a Charm quark.

But the fifth component is the strangest: an anti-matter particle known as an antiquark. That could provide scientists with an entirely new glimpse at how the universe is constructed.

"It is an important result in that it shows that there is a new state of matter," Professor Sheldon Stone of Syracuse University, told IFLScience. "Although pentaquark states were thought possible from the dawn of the quark model, the theory that explains the structure of baryons like the proton, they had never been seen before."

The Large Hadron Collider provided just such an observation. Using the state-of-the-art technology, scientists monitored the decay of a baryon known as Lambda b. As that particle broke into its three component quarks, two previously unobserved particles were seen in the transitionary state.

"We are transforming this problem from a one-dimensional to a five dimensional one…we are able to describe everything that happens in the decay," Koppenburg said. "There is no way that what we see could be due to something else other than the addition of a new particle that was not observed before."

There are still a lot of questions left to be answered. CERN is now interested in taking a closer look at the structures to determine how pentraquarks are bound together. Still, it’s a major advancement in particle physics.