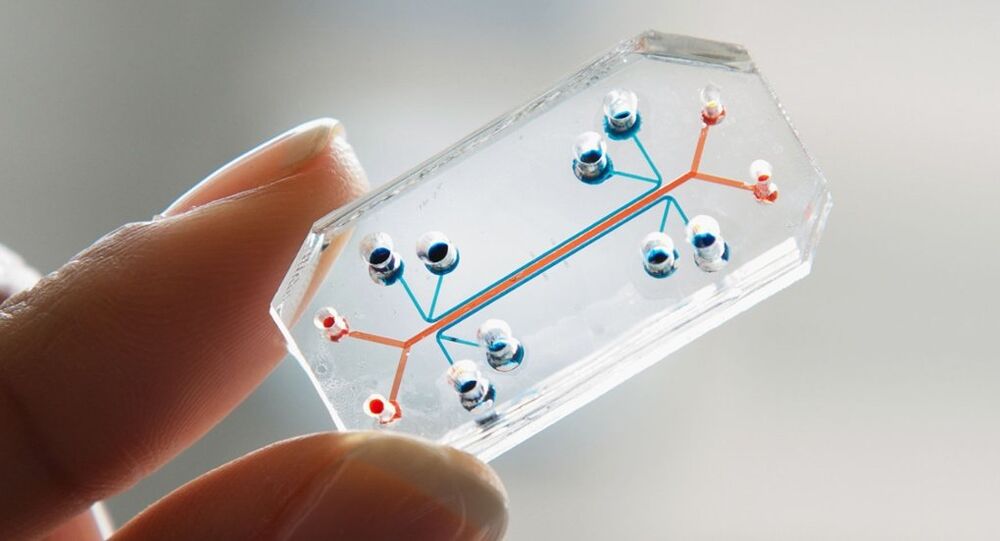 The award marks the first time an innovation from the field of medicine has won the design prize; its creators hope their invention can provide an alternative to testing treatments on animals by using microchips to recreate the microarchitecture and functions of living organs.

© Sputnik / Maksim Blinov
Tomorrow People: Russian Engineer Implants Metro Chip Under His Skin
The Organs-on-Chips system has won the London Design Museum's Design of the Year Award for 2015, the first time the prize has been won by an entry from the field of medicine.
© Flickr / cell105
No Deal: Intel Can’t Sell Chips to China Over US Nuclear Fears
According to a representative from the London Design Museum, where the invention is currently on display as part of its 'Designs of the Year' exhibition, the selection of organs-on-chips "signifies a desire to recognize and award design that can significantly impact society now and in the future."

The entry was nominated by the curator of New York's MoMA Paola Antonelli, who called the project "the epitome of design innovation – elegantly beautiful form, arresting concept and pioneering application."

Human Organs-on-Chips was designed by a team of researchers at the Wyss Institute for Biologically Inspired Engineering in Massachusetts, who came up with their invention as a response to the "broken" paradigm used by pharmaceutical companies which discover and develop new drugs.

Instead, the Institute and its collaborators have come up with microchips which recreate the microarchitecture and functions of living organs, such as the lung, heart, and intestine.

"Each individual organ-on-chip is composed of a clear flexible polymer about the size of a computer memory stick that contains hollow microfluidic channels lined by living human cells. Because the microdevices are translucent, they provide a window into the inner workings of human organs."

In addition to its drug testing-related applications, the technology "has great potential to advance the study of tissue development, organ physiology and disease etiology," wrote the developers in a scientific paper about the devices, published in August 2014 in the journal Nature Biotechnology.

As a next step, the team at the Wyss Institute plans to build ten different organs-on-chips and string them together to make a "human-on-a-chip," which will mimic the physiology of the whole human body.