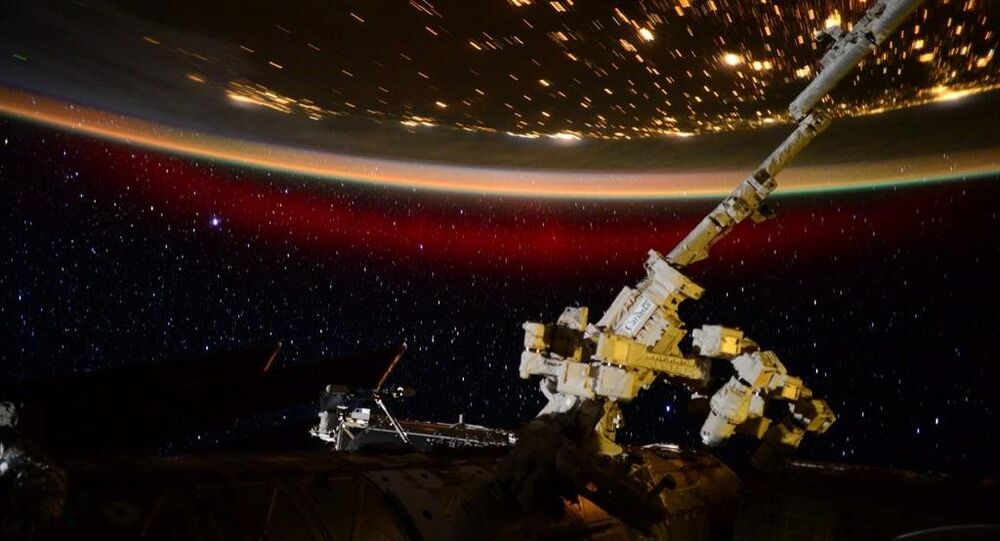 Stationed aboard the International Space Station, US Astronaut Scott Kelly has captured eerie and beautiful photo and video materials of a rare red aurora from 400km above Earth's atmosphere.

Kelly posted the photos, and a video, on his Twitter account, wowing space enthusiasts and casual observers alike.

The astronaut exclaimed that the "red curtain" of the rare red aurora over earth was "Spectacular!" noting that he'd never seen this before," and adding the next day that "I don't think I will ever see another quite like you again."

Day 87. The red curtain of an #aurora closes on another day. Good night from @space_station! #YearInSpace pic.twitter.com/NUyJkGKy9y

#Aurora I don't think I will ever see another quite like you again. #YearInSpace pic.twitter.com/NVywx2JH3r

Kelly also posted a hauntingly beautiful video of the aurora, shot over the Earth's atmosphere as the ISS orbits the planet.

Yesterday's #aurora was an impressive show from 250 miles up. Good morning from @space_station! #YearInSpace https://t.co/wZJOxrD0EQ

The aurora, a natural light display usually seen in the sky above planet Earth in areas near the north and south poles, is caused by the interaction of cosmic rays, solar wind and magnetospheric plasma interacting with the planet's upper atmosphere.

© AP Photo / Gagarin Cosmonaut Training Center via NASA
Russian & American Set for Space Record, While Governments Quarrel on Earth
Kelly arrived on the ISS in late March aboard the Soyuz TMA-16M spacecraft along with Russian cosmonauts Mikhail Kornienko and Gennady Padalka. Kelly and Kornienko are due to spend a year aboard the ISS, returning to Earth in March 2016. The crew is set to conduct over 49 scientific experiments, mostly in the field of medicine, to work with Russian 'Progress' cargo ships, and to carry out a spacewalk.
...
Reddit
Google+
Blogger
Pinterest
StumbleUpon
Telegram
WhatsApp
54

Political Tensions Between Russia, US Irrelevant Aboard ISS