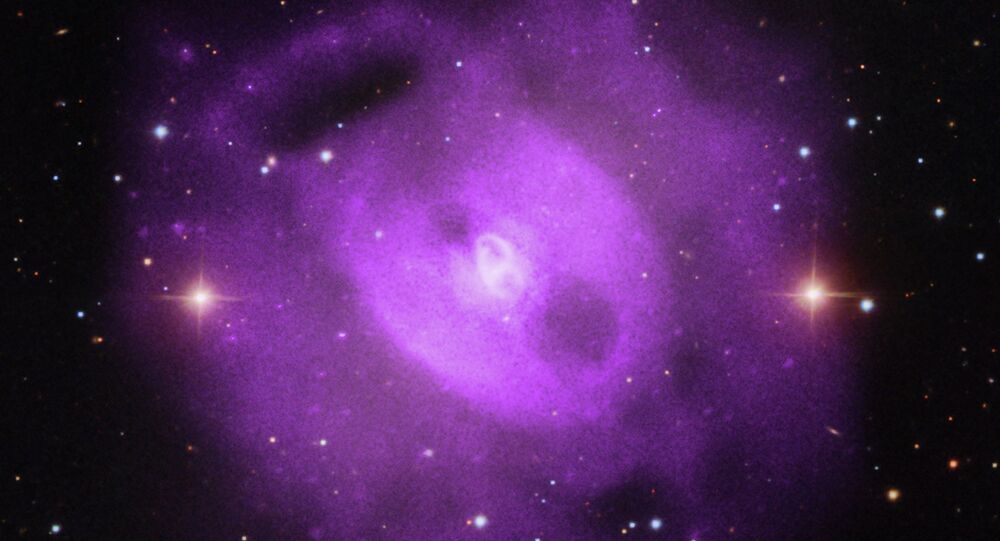 NASA
Ceres' Mysterious Spots: NASA Gets Best Shot of Them Yet
Astrophysicists observed three consequential matter eruptions from a supermassive black hole at the center of NGC 5813 — a group of galaxies 105 million light years away from Earth.

A galaxy group is similar to a galaxy cluster but usually consists of 50 or less galaxies, whereas a cluster can comprise thousands of them.

Astronomers used the Chandra X-ray Observatory — NASA's flagship X-ray telescope — to conduct the longest study of a galaxy group ever: the research took over a week.

The study suggested that the center of galaxy group NGC 5813 contains a supermassive black hole, whose spin, "coupled with gas spiraling toward the black hole, can produce a rotating, tightly wound vertical tower of magnetic field that flings a large fraction of the inflowing gas away from the vicinity of the black hole in an energetic, high-speed jet", NASA explained.

© Flickr / kenmoo
Scientists One Step Closer to Creating Predator-Like Invisibility Suits
The jets generate shock waves pushing the gas, heated to millions of degrees, outside, and carve out so-called "cavities", or "bubbles". During the latest observation, the astrophysicists detected the third pair of those "cavities", which is the biggest quantity of pairs of "cavities" in a cluster or a group of galaxies ever found. The "bubbles" are drifting away from the black hole similarly to a bubble that rises to the water's surface. The observed "bubbles" can preserve a stable state for up to 50 million years.

Studying the characteristics of the three pairs, the researchers calculated that the formation of the last pair of "cavities" took less energy than the two older pairs. The scientists deduced an inference that the eruption of matter still occurs at the center of NGC 5813. This means the center of NGC 5813 influences both the group of galaxies itself and its neighbors, too.

© NASA . JPL-Caltech/MSSS
Playing God? Russian Scientist Gets Patent on Transfiguring Martian Atmosphere
The study also supports the theory that supermassive black holes really derail the star formation process in many galaxies: the "bubbles" collide with cold clouds of gas (material for star formation) and therefore prevent them from entering galaxies. That is why half of all big galaxies in the Universe are giant "graveyards" of stars.

The results of the study are available in The Astrophysical Journal.