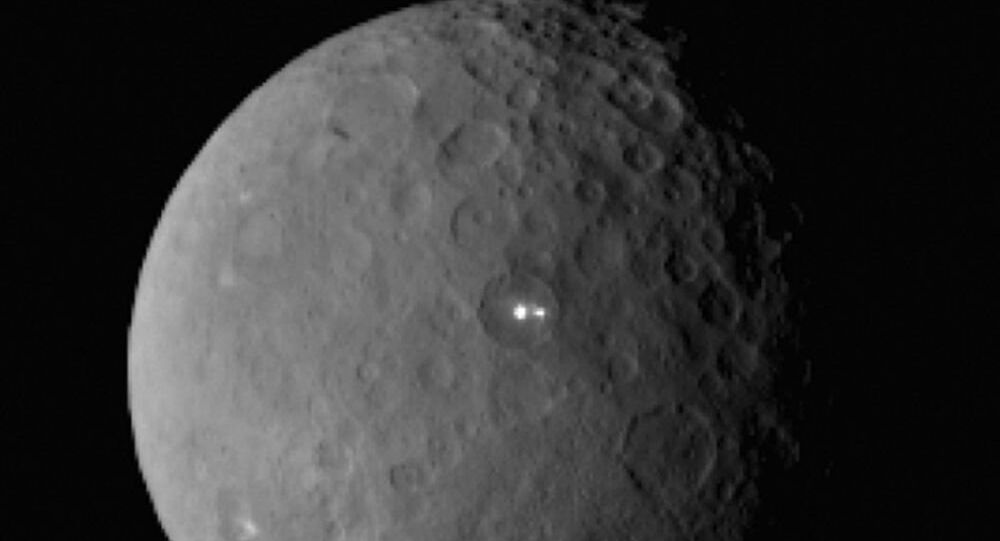 Ever since they were first observed by the Hubble Telescope, the bright spots on dwarf planet Ceres have raised mass speculation as to what, exactly, they are. As NASA’s Dawn spacecraft orbits ever closer to the surface, it has captured its best view yet of the mysterious, glowing specks.

No one’s entirely sure what they are. Vivid, reflective spots littered across an otherwise gray and dusty world. The most brilliant lie in a crater 55 miles wide, and reflect sunlight at a brightness 4 times greater than any other object on the surface of Ceres.

NASA has conducted polls to determine what the general public believes the spots to be. Thirty percent of people voted for the ice hypothesis, one shared by a large number of scientists. Ten percent suspect they’re volcanoes, while 8% believe they could be salt deposits, another favorite among scientists. Still, the largest vote, with 38%, went to "other."

NASA/JPL-Caltech/UCLA/MPS/DLR/IDA
A large crater in the southern hemisphere of dwarf planet Ceres.

Whatever the spots may be, they’ve captured the public’s imagination. This month, NASA’s Dawn mission has captured the closest, clearest images to date, yet scientists are still unsure of what the spots could be.

"The bright spots in this configuration make Ceres unique from anything we’ve seen before in the solar system. The science team is working to understand their source," Dawn principal investigator Chris Russell said in a statement.

"Reflection from ice is the leading candidate in my mind, but the team continues to consider alternate possibilities, such as salt."

NASA/JPL-Caltech/UCLA/MPS/DLR/IDA
The brightest spots on dwarf planet Ceres are seen in this image taken by NASA's Dawn spacecraft on June 6, 2015.

NASA plans to receive even clearer images soon. While the latest photos were taken 2,700 miles above Ceres, the spacecraft will soon descend to just 900 miles above the surface. The probe will reach that altitude in August, beginning the slow fall on June 28.

That long travel time is due to Dawn’s ion engines. While highly efficient, the engines have an incredibly low thrust, essentially the equivalent of a car that takes two days to accelerate from zero to 60 miles per hour.

NASA/JPL-Caltech/UCLA/MPS/DLR/IDA
Craters in the northern hemisphere of dwarf planet Ceres are seen in this image taken by NASA's Dawn spacecraft on June 6, 2015.

"With closer views from the new orbit and multiple view angles, we soon will be better able to determine the nature of this enigmatic phenomenon," Russell said.

The Dawn mission will continue through June 2016. It will eventually descend to an altitude of only 230 miles above the surface, offering even better views, before being shut down and left to orbit Ceres in silence, 257 million miles from home.

The Plot Thickens: New Data About Bright Flashes on Ceres