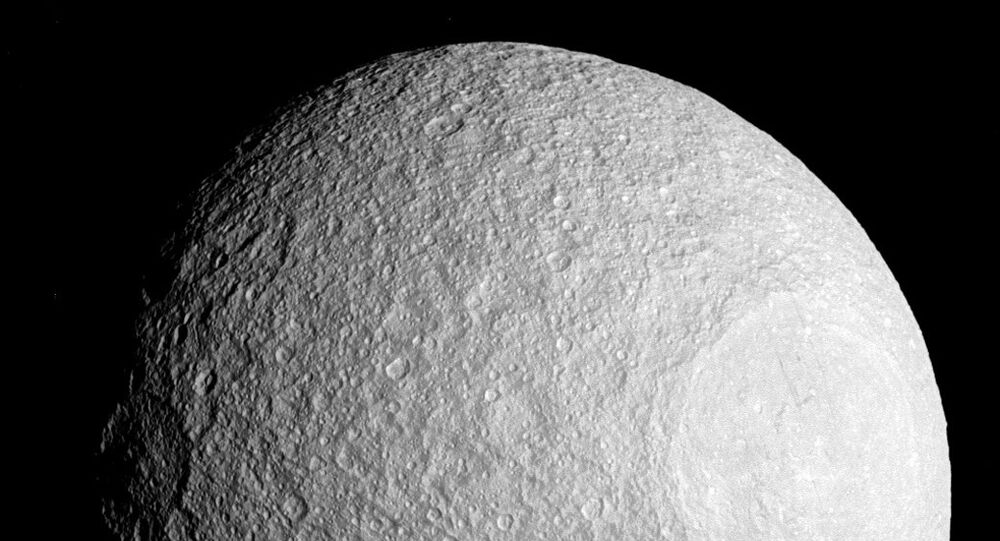 NASA has revealed recently taken pictures of Saturn’s heavily cratered third moon, Tethys, which include photos of the mega-crater Odysseus, which covers about 18 percent of the moon’s surface area; the pictures were taken by the Cassini Space Probe’s narrow-angle camera on April 11, 2015.

Like most moons in the solar system, Saturn's moon Tethys is covered by impact craters. The largest and the most impressive one is the crater Odysseus (seen at the right of the image).

While the entire moon is 1,062 kilometers (660 miles) in diameter, the crater Odysseus alone is 450 kilometers (280 miles) across, covering about 18 percent of the moon's surface area. If the Earth were to feature an impact crater which occupied a comparable proportion of its surface area, it would be as large as Africa, the agency says.

The view is of the hemisphere of Tethys which faces away from Saturn. The moon is shown at a 42 degree angle in the picture.  The image was taken in visible light with the Cassini spacecraft's narrow-angle camera on April 11, 2015.

© AP Photo / NASA/JPL-Caltech/SSI/PSI
Alone No More? Saturn Moon Enceladus Has Potential to Support Life
The Cassini mission is a cooperative project between NASA, ESA (the European Space Agency) and the Italian Space Agency.

Tethys is a small moon which orbits 294,660 kilometers (183,100 miles) from Saturn. This cold, airless, and heavily scarred body is very similar to its sister moons Dione and Rhea except that Tethys is not as heavily cratered as the other two. This may be because its proximity to Saturn causes more tidal warming than on the other two moons, and that warming kept Tethys partially molten longer, erasing or dulling more of the early terrain.

Tethys has two overpowering features, a giant impact crater and a great valley. Odysseus Crater (named for a Greek warrior king in Homer's two great works, The Iliad and The Odyssey) dominates the Tethyan western hemisphere. Odysseus Crater is nearly two-fifths as wide as Tethys itself. Such an impact could have shattered a solid body, which suggests that the internal composition of Tethys was still partially molten when it occurred..

Ron Miller
Methane-Based Aliens May Exist on Saturn's Moon Titan
The crater's rim and central peak have largely collapsed, leaving a shallow crater, and this also suggests a terrain that was elastic enough to change shape. The subdued features of Odysseus contrast with many steep cliffs elsewhere. This again suggests that the ancient terrain that was still elastic enough to change shape.

The second major feature, a valley called Ithaca Chasma (named for the country ruled by Odysseus), runs roughly from the Tethyan's north pole to its south pole. It is 100 kilometers wide, 3 to 5 kilometers deep, and extends 2,000 kilometers

Tethys' density is 0.97 times that of liquid water, which suggests that Tethys is composed almost entirely of water ice plus a small amount of rock.

Giovanni Cassini discovered Tethys in 1684. The name comes from the Greek goddess (or titan) Tethys, who was the daughter of Uranus and Gaia and the wife of Oceanus.