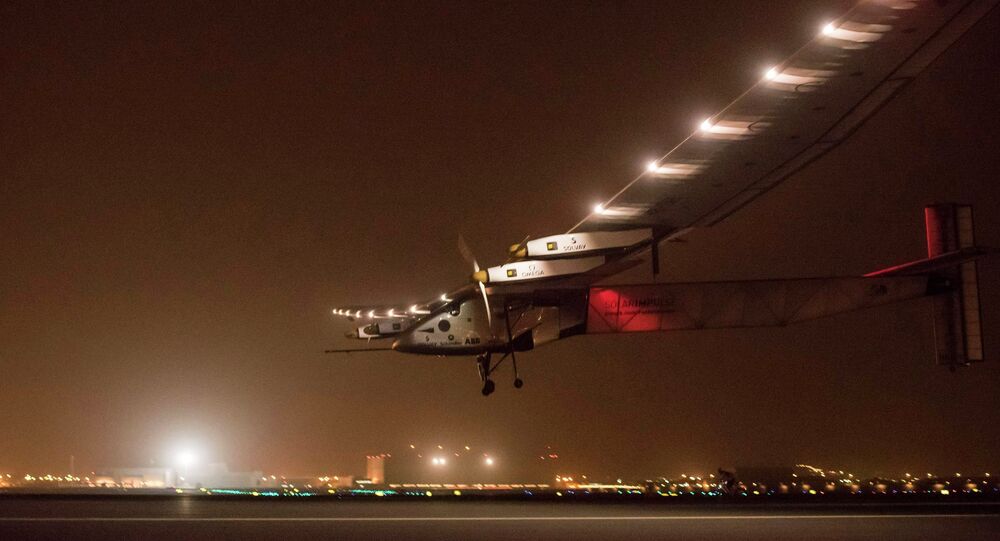 Two Swiss pilots, who are undertaking a historic five-day nonstop flight from China to Hawaii in a solar-powered plane, will hypnotize themselves to stay alert during the journey.

© AFP 2021
Solar-Powered Plane Takes Off in First Attempt to Cross Pacific Ocean on Sun Energy
Swiss pilots Bertrand Piccard and Andre Borschberg kicked off an unprecedented round-the —world flight in a solar-powered zero-fueled Solar Impulse 2 in early March, 2015, aiming to demonstrate the advantages of solar energy; the pilots are using self-hypnosis techniques and yoga to stay awake during the experiment.

Pilot Andre Borschberg, 62, left eastern China's Nanjing for Hawaii 18:39 GMT time on Saturday and will have to fly a distance about 4,413 nautical miles (8,172 kilometers). It is expected that his colleague, Piccard will fly the next leg of the Pacific journey in Solar Impulse 2 from Honolulu to Phoenix.

© REUTERS / Solar Impulse/Revillard/Rezo.ch
Solar-Powered Plane Starts First Ever Round-The-World Trip
During the flight the pilots can only take short naps a few times a day while the plane is on autopilot. In order to stay alert both Bertrand Piccard and Andre Borschberg use special self-hypnosis techniques.

Piccard told LiveScience that usually "one's center of awareness is outside of one's self," so a person focuses simultaneously on different things he sees, hears and feels wasting his time and energy.

But "when you get into self-hypnosis, you turn your look from the outside to the inside. You don't focus anymore on what happens outside, you focus only on the inside," Piccard elaborated.

According to Piccard in this special, altered state of consciousness, he is "completely relaxed — the body is sleeping, but the mind is alert, and can still check instruments, talk to mission control and fly the plane."

Bertrand Piccard has already tested this special technique during a five-day trans-Atlantic balloon trip in 1992. Before the journey he trained in a simulator and was able to stay alert for almost 86 hours interrupted by a dozen 20-minute short naps.

On the other hand, his compatriot and colleague Andre Borschberg practices yoga while flying. Special postures and meditation help him to stay focused, relaxed and keep his blood pressure and blood flow healthy.

This flight is absolutely unbelievable for me. I will remember it all my life @solarimpulse pic.twitter.com/Y0XAzFboDg

The Swiss pilots kicked off their historic mission in Abu Dhabi, the United Arab Emirates and have so far landed in Oman, India, Myanmar and China. After landing in Honolulu, the solar-powered plan will make stops in several cities in the United States and then continue on to Europe. The mission will be accomplished when Solar Impulse 2 lands in Abu Dhabi, finishing its historic round-the-world flight.

Sun Rays Instead of Jet Fuel: Solar Impulse 2 Takes Off