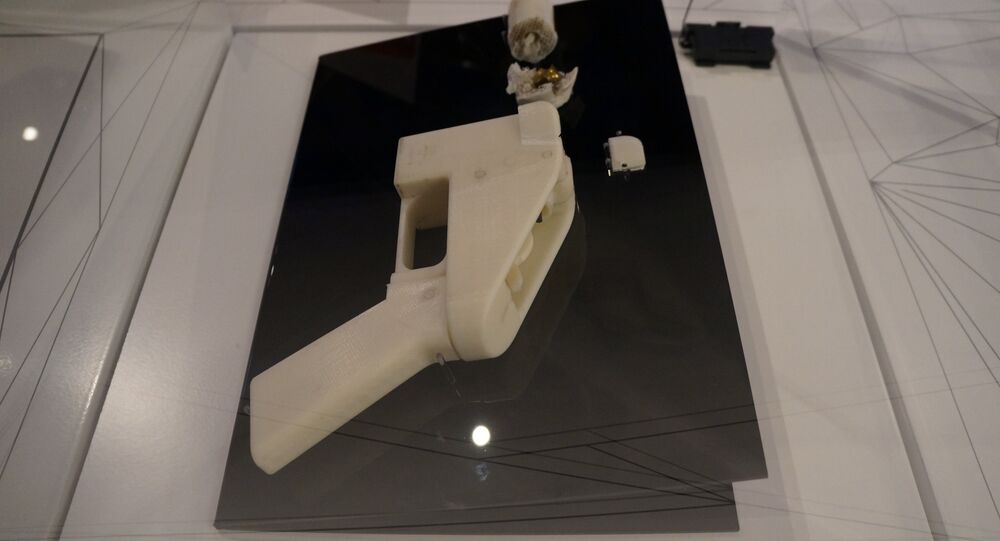 The inventor of the world’s first 3-D printed gun has filed a lawsuit in conjunction with the Second Amendment Foundation, against the State Department and several US officials including John Kerry.

Two years ago this week, Cody Wilson of R&D firm Defense Distributed received a letter from the State Department with an ultimatum that he remove the blueprints for his one-shot plastic pistol — called “The Liberator” — off of the Internet, or face prosecution for international export of unapproved arms.

On Wednesday, Defense Distributed along with the Second Amendment Foundation filed a lawsuit stating that the Directorate of Defense Trade Controls, a State Department agency, committed a violation against Wilson’s First Amendment rights by telling him he could not publish the blueprints.

© Flickr / hackNY.org
Access to Encryption Software Easier for Hackers to Steal Info - EFF
“The Internet is available worldwide, so posting something on the Internet is deemed an export, and to [the State Department] this justifies imposing a prior restraint on Internet speech,” Alan Gura, the lawyer leading the lawsuit, told Wired. “That’s a vast, unchecked seizure of power over speech that’s…not authorized by our constitution.”

The DDTC claimed that by simply posting the printable file online Wilson was essentially doing the same thing as smuggling weapons to another country and cited ITAR, or International Traffic in Arms Regulations, which control international sales of weapons.

Over two decades ago, ITAR was used to threaten those who posted encryption tools online, considering them “military munition.”  The agency eventually lost in court on constitutional grounds, causing control of encryption software exports to be moved from the State Department to the Commerce Department, Wired reported.

Along with challenging the legality of the censorship under the first amendment, he is also citing the second and fifth amendments in his complaint.  The legal team argues that by not allowing the upload of the blueprints, the government has denied the group and their followers the right to bear and acquire arms.

As far as the Fifth Amendment is concerned, they say that their right to due process was violated as the threat of prosecution was thrown at Wilson without a time limit or even a decision on the legality of his publications.

“Defendants’ censorship of Plaintiffs’ speech, and the ad hoc, informal and arbitrary manner in which that scheme is applied, violate the First, Second, and Fifth Amendments to the United States Constitution. Plaintiffs are entitled to declaratory and injunctive relief barring any further application of this prior restraint scheme, and to recover money damages to compensate for the harm such application has already caused,” the complaint states.

Wilson is seeking years worth of damages for the restriction of his ability to publish and is also seeking an injunction to stop the State Department from their censorship of his website.

Although the files were not available through Wilson, the Streisand Effect caused by the State Department’s interference lead to torrented copies of the blueprint being downloaded more than 100,000 times in two days on file sharing websites, including The Pirate Bay.

“So apparently there are some 3D prints of guns in the physibles section at TPB. Prints that the US government now claim ownership of. Our position is, as always, to not delete any torrents as long as its contents are as stated in the torrents description. Printable guns [are] a very serious matter that will be up for debate for a long time from now. We don't condone gun violence. We believe that the world needs less guns, not more of them. We believe however that these prints will stay on the internets regardless of blocks and censorship, since that's how the internets works. If there's a lunatic out there who wants to print guns to kill people, he or she will do it. With or without TPB. Better to have these prints out in the open internets (TPB) and up for peer review (the comment threads), than semi hidden in the darker parts of the internet,” The Pirate Bay wrote on their Facebook page on May 10, 2013.