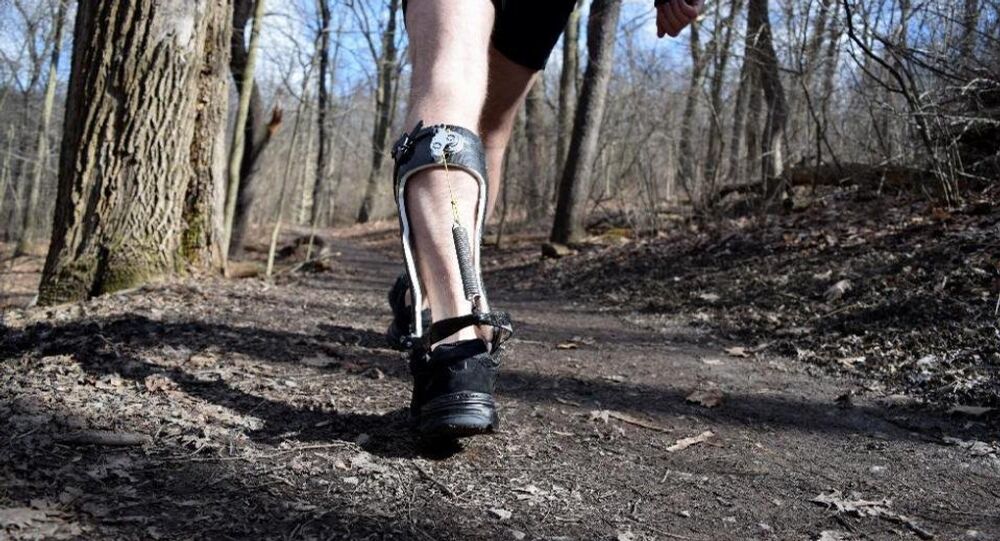 Scientists have developed a device that makes for more energy efficient walking, a human movement few scientists believed could be improved upon.

The exoskeleton boot — described in a paper published in the journal Nature — features a spring and clutch system running parallel to the calf and Achilles tendon from the knee to the ankle. Researchers say it can save 7% of the energy used in normal walking, and requires no batteries or external energy source.

The human gait has evolved over millions of years, and is so central to our movements that scientists had generally believed there was no way to improve upon the motion, so even a 7% rise in efficiency is a significant gain.

Making walking more energy efficient, of course, means that it will burn fewer calories, and in obesity-wracked US society some have questioned the utility of such a device.

One theory, applied to the general, able-bodied population, is that making an action easier could actually encourage people to do more of it — and burn more calories — over the long term. It could also help those who need a boost for a particular reason.

"For a 65-year-old active person, it could really prolong their active years," co-author of the study, Gregory Sawicki, a biomedical engineer and locomotion physiologist at North Carolina State University in Raleigh, told Nature.

But the device isn't principally intended for the general population, and researches say they aren't looking into manufacturing this particular device any time soon. Mainly the project was a design challenge they hope will lead to other devices.

"We're particularly interested in trying to develop technologies to help people who have disabilities that affect the lower limbs, like, people who've had a stroke or amputation, whose energy cost tends to be elevated by 20%-50% higher than their non-disabled counterparts," lead author of the study, Steven Collins from Carnegie Mellon University, told Nature Magazine's podcast.

A Little Spring in Your Step

The device uses the spring and clutch system to store energy with each step. When the foot leaves the ground in preparation for a new step, the spring acts in concert with the calf and Achilles tendon, reducing the energy expended in taking each step.

The device weighs only a half a kilogram — though it’s still a bit too bulky to be worn under long trousers. The boot has only so far proven to have the 7% energy savings on flat surfaces, so a next step is to try it on more varied terrain, which Collins is optimistic about from his own personal use of the device.

"Subjectively, it feels great on hills, cross-slopes, picking your way through tree roots, going up stairs, and so on."