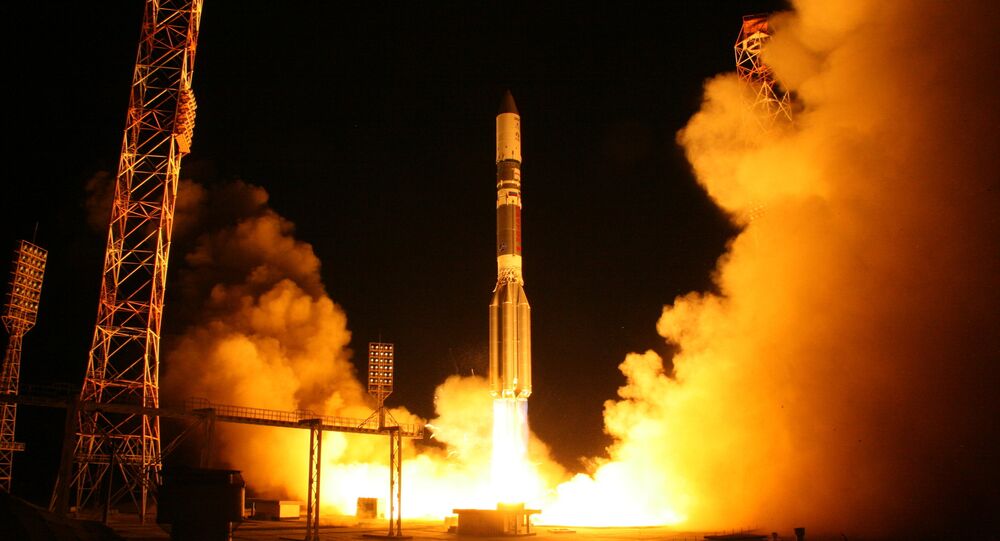 The Baikonur Space Center in Facts and Details

The Baikonur Space Center is an international facility for operating Russian and multinational space programs.

© Sputnik / Sergey Kazak
Strela Rocket With Kondor-E Satellite Blasts Off From Baikonur:Space Agency
MOSCOW (Sputnik) — On February 12, 1955, a decision to construct the Baikonur Space Center in Kazakhstan was adopted.

The Baikonur Space Center is an international facility for operating Russian and multinational space programs.

Russia holds a lease on the Baikonur Space Center until 2050 in accordance with an agreement between the Russian Federation and the Republic of Kazakhstan.

The space center includes launch facilities and a town.

First conceived as a research and testing range for the Soviet Defense Ministry, the facility eventually turned into an international space center.

© Sputnik / Anton Denisov
Russia to Conduct Seven Launches from Baikonur Cosmodrome in Three Months
The state commission responsible for selecting an optimal site for the construction of the space center was established in 1954. After surveying several regions, its members suggested building the space center in a deserted area of Kazakhstan east of the Aral Sea and several hundred kilometers from the town of Baikonyr (Baikonur in Russian). This site had several advantages over others considered. The immediate launch area and the area along the planned rocket trajectories were sparsely populated. Local terrain included plains and semi-deserts, as well as the Syr Darya River, the largest river in Central Asia. Moreover, a rail and road links were located nearby. The number of sunny days exceeded 300 annually, and, most importantly, the area was located close to the equator, thereby making it possible to utilize the Earth's additional rotational speed during space launches.

On February 12, 1955, the Central Committee of the Communist Party of the Soviet Union and the Council of Ministers (Government) of the USSR passed a joint resolution on establishing the Research & Testing Site No. 5 of the Soviet Defense Ministry (NIIP No. 5). From the very beginning, this facility was to be used for testing military missiles as well as spacecraft. A large semi-desert between two district centers of Kazakhstan's Kzyl-Orda Region – Kazalinsk and Jusalami – and not far from the Tyura Tam crossing-loop station of the Moscow-Tashkent railway was selected for the site.

In the first half of 1955, the site was called Taiga because no expression for "space center" (or cosmodrome) existed in the Russian language. The new construction project was called simply "Experimental Range."

In January 1955, the first military construction team arrived at Tyura Tam and started building production facilities there. Workers laid the foundations for concrete production plants and installed concrete-mixing systems. They also built mechanized warehouses for storing sand and gravel, as well as sawmills and wood-working plants. In March-April 1955, a reconnaissance team arrived at the future space center, and eight military construction battalions began working on the site of the main testing facility in April-June 1955. A huge amount of equipment was delivered to Tyura Tam.

© Sputnik / Alexei Filippov
New Crew Launched to ISS From Baikonur Cosmodrome’s Site 31
The workers, who had no experience building such facilities, had to endure a severe climate and substandard living conditions, and had to meet tough construction deadlines. At first, they lived in tents, while later they built the first dugouts on the banks of the Syr Darya River in the spring of 1955. Construction of the first wooden barracks commenced in May.

The town and the testing range were officially founded on June 2, 1955 when a directive of the Soviet Defense Ministry's General Staff approved the organizational structure of NIIP No. 5.

The town changed its name several times. First, it was nicknamed Zarya (Dawn) and was also named the township of Leninsky in 1958. It was renamed the town of Leninsk and, finally, Baikonur in 1969 and 1995, respectively.

On July 20, 1955, construction teams started assembling Launch Pad No. 1. First, they had to dig a 45-meter-deep pit measuring 250 meters long and over 100 meters wide. They also had to remove over one million cubic meters of earth and pour over 30,000 cubic meters of concrete. The teams worked round the clock. Specialized equipment started being installed at the launch pad four months later. The first vehicle assembly and testing building was also completed on schedule.

High-priority facilities of the first space center were completed in December 1956. Experts started upgrading ground equipment and preparing for rocket and missile launches.

The measuring network of the space center was completed in the run-up to tests, and covered a large area along rocket and missile trajectories and near payload drop zones.

On May 5, 1957, a special commission approved the first launch pad for subsequent operations, and already by May 15, the first R-7 / SS-6 Sapwood ICBM from the Sergei Korolyov design bureau lifted off.

Soyuz-2.1A Rocket Installed at Baikonur, Expected to Launch on 29th: Russian Space Agency
On October 4, 1957, Sputnik One, the first man-made space satellite, was launched. On April 12, 1961, the testing site's launch team and representatives of defense industry companies assembled for the launch of the Vostok One spacecraft that carried Yuri Gagarin, the first human to go into outer space.

A "dummy" space center was established near the town of Baikonyr, 350 kilometers north of Tyura Tam railway station, for security reasons. This facility was located in the northern valleys of Kazakhstan"s Alatau mountain range. The Soviet media reported spacecraft launches from a place called Baikonur, which eventually came to be associated with the real space center.

After April 12, 1961, NIIP No. 5 was officially named the Baikonur Space Center (for use in media and other similar reports and purposes). In the following years, science and military satellites lifted off from Baikonur. Soviet probes blasting off from Baikonur reached the Moon, Venus and Mars. The Soviet-made Vostok, Voskhod, Soyuz and Progress spacecraft, as well as the Salyut and Mir orbital stations and many other spacecraft, were launched from this space center. The Buran (Snow Storm) reusable space shuttle also took off from here.

With border changes in the early 1990s, following the break-up of the USSR, the location of the space center found was determined to be Kazakhstan. Many space programs were scraped and fewer spacecraft were launched. The town's population also dwindled considerably. In May 1992, Russia and Kazakhstan signed an agreement transferring the space center facilities to Kazakhstan's jurisdiction.

For about 40 years, Baikonur was managed by the Soviet Defense Ministry, as well as the Ministry of General Machine-Building, which oversaw spacecraft and launch vehicle manufacture. The Russian Defense Ministry and the Russian Federal Space Agency (Roskosmos) subsequently took over its management. The space center has now discontinued military projects, and Roskosmos and the Baikonur town administration run its facilities on behalf of the Russian government. A special representative of the President of Kazakhstan and the head of the Kzyl-Orda Region, as well as the National Space Agency of the Republic of Kazakhstan, also manage the facility on behalf of the republic's government.

The Baikonur Space Center covers a territory measuring about 70 by 100 kilometers with a total area of 6,717 square kilometers. Its ground infrastructure has 12 launch facilities, including six operational launch pads. Launch vehicles, boosters and spacecraft are assembled at 11 vehicle assembly and testing buildings. The center has two refueling and fuel-neutralization stations, a multipurpose refueling station and a technical station for refueling spacecraft and boosters with rocket propellant components and compressed gases. There are also a measuring network with a computer center and an oxygen-nitrogen plant, generating up to 200 metric tons of cryogenic products daily.

Russia has been rebuilding the space center and the town for the past ten years. Subsidiaries of Roskosmos are being established here, and commercial launches involving foreign companies are being conducted. Baikonur also provides logistical support for the International Space Station program, and the first Proton-M, Soyuz-FG, Rokot, Dnepr and Strela launch vehicles have lifted off from here.

Strela Rocket With Kondor-E Satellite Blasts Off From Baikonur:Space Agency