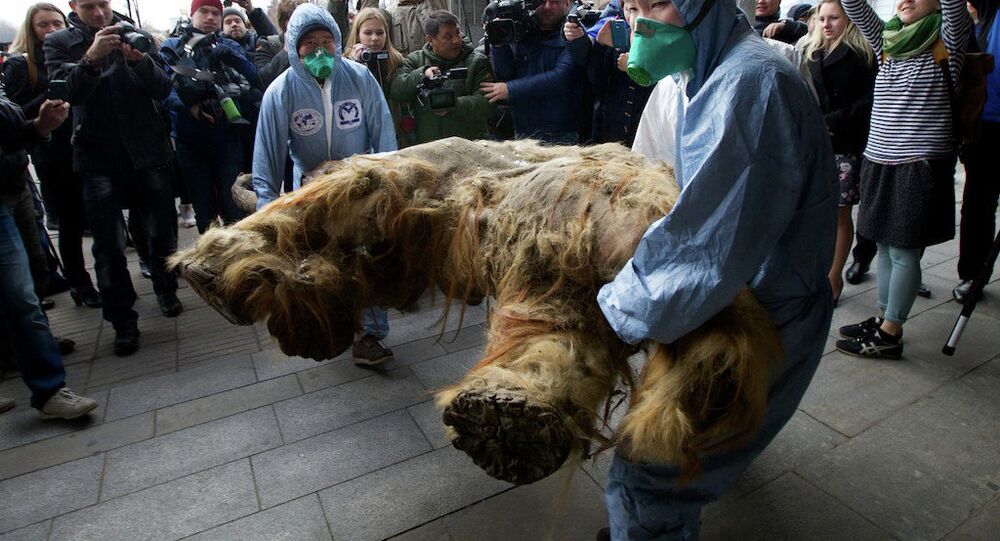 Mammoth Task: Cloning of Extinct Animals Could Be a Huge Ethical Problem

As the media trumpets new advances in cloning, some researchers find the treatment of existing animals problematic.

© RIA Novosti . Vitaliy Belousov
Baby Mammoth Yuka on Display in Moscow
7
MOSCOW, January 16 (Sputnik) – The magnificent wooly creatures that once roamed the expanses of Siberia may soon walk again thanks to Korean and American researchers actively trying to clone the woolly mammoth, according to a new article in CBC News.

However, some experts warn that the action could set a hairy precedent. Dr. Tori Herridge, a researcher who took part in a recent autopsy  of a well-preserved mammoth nicknamed "Buttercup," wrote an opinion piece for the Guardian, believes that it would be a step back, as the process needlessly endangers existing elephants, which could face great risks from going through surrogate motherhood.

However, the world is all ears for new advancements in the cloning of the woolly mammoth, as such a feat would be an unprecedented development in cloning technology. Dr. Tori Herridge points out in her opinion piece, the successful cloning of a woolly mammoth would bring great amounts of money for the researcher who succeeds at the task. Because of this, the issues of existing elephants, which are necessary for the successful cloning of mammoths, could be ignored.

© RIA Novosti . Bolot Bochkarev
Putin Discusses Possibility of Mammoth Cloning With Scientists
Although the idea of bringing back the mammoth is enough to make some ethicists seethe with anger, the process has been underway for some time. A television program titled "How to Clone a Woolly Mammoth" presented on the Smithsonian Channel late last year described the process undertaken in studying a well-preserved mammoth recovered in Siberia, which could bring the possibility of cloning a mammoth to life once a cell with intact DNA is found, as is the plan of the Korean researchers. American researchers instead study the elephant genome and see how genes of mammoths could replace it until something resembling a mammoth genome is produced, according to the CBC News article.

Freezing the existent research could also mean trouble, as the resources poured into the task would not easily be recovered. The Korean researchers already developed a system for cloning dogs that could be developed for applications to benefit humans once it's advanced enough for cloning mammoths. Likewise, Dr. George Church's study of the mammoth genome could be used to unlock a wealth of knowledge about extinct animals as well as studies of human evolution.

© RIA Novosti . Vitaliy Ankov
Mammoth Research Center to Open in Russia's Yakutsk
While there could be pitfalls to having a cloned mammoth be carried in a surrogate womb of an elephant, as Dr. Herridge points out in an interview to the Independent, Sir Ian Wilmut, the professor who cloned Dolly the Sheep, believes it is an important endeavor according to an article in the Telegraph. Sir Wilmut believes that it is a reasonable idea as there is much that can be learned about the animal.
...
Reddit
Google+
Blogger
Pinterest
StumbleUpon
Telegram
WhatsApp
98

Mammoth 'Zhenya' On Way to St. Petersburg for Study