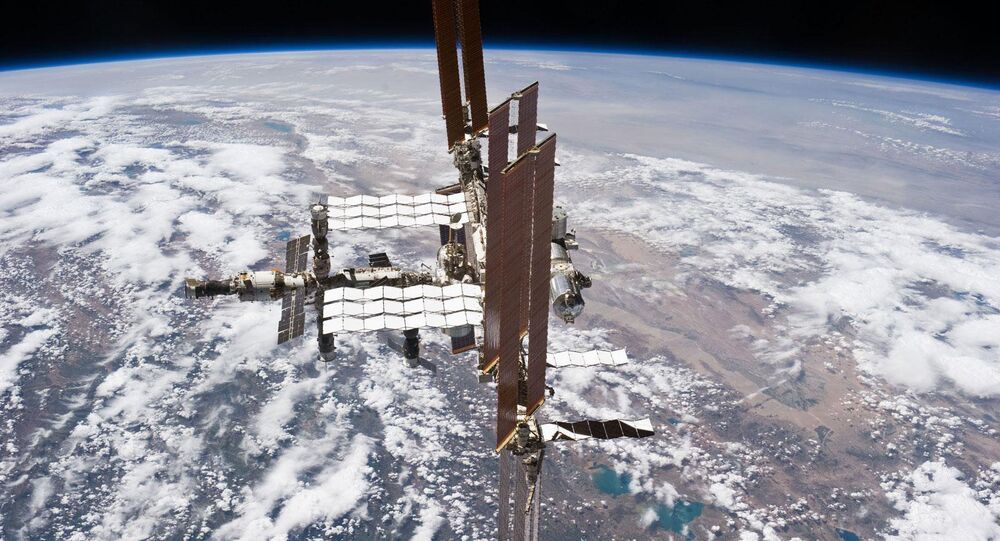 MOSCOW, January 14 (Sputnik) — On Wednesday, Russia's space agency, Roscosmos, said that ammonia from an air conditioning unit in the American segment of the International Space Station (ISS) was reported to have been discharged into the station's atmosphere, with the American crew relocating to the Russian segment and the US segment being isolated.

The same day, NASA said that the cause of the alarm on board the orbital outpost was most likely a faulty sensor or a computer glitch.

The ISS concept was based on the successful experience of operating manned Russian orbital stations and reusable US Space Shuttles.

The construction of the ISS began on November 20, 1998 with the launch of a Russian Proton-K rocket that orbited the Zarya (Dawn) Functional Cargo Block that became the first ISS module. The Zarya block was developed and assembled at the Khrunichev State Research and Production Space Center.

© NASA
Reason for Ammonia Leak Alert on ISS Still Unknown, Data Being Analyzed: NASA
On December 4, 1998, Space Shuttle Endeavour STS-88 orbited the NODE-1 Unity module as part of Mission 2A of the ISS program. On December 7, the Endeavour docked with the functional cargo block and attached the NODE-1 module to it using a mechanical manipulator. The shuttle crew installed communication equipment inside and outside the station and also conducted routine maintenance and repairs. The crew undocked on December 13 and returned to Earth on December 16.

On July 12, 2000, a Russian Proton-K launch vehicle successfully placed the Zvezda (Star) Service Module into a preset near-Earth orbit. This became the third ISS module for ensuring centralized digital control of the station, attitude control, and adjusting the orbit. The module also monitored the operation of life support systems and systems ensuring the required environmental parameters during the continuous space flight.

On July 26, 2000, the Zvezda successfully docked with the Zarya-Unity tandem, increasing its total weight to about 52.5 metric tons.

Thus the ISS, which was previously visited only sporadically, became ready to receive long-duration expeditions.

On October 31, 2000, the Soyuz TM-31 spacecraft carried the first ISS main expedition, including two Russian cosmonauts Yury Gidzenko and Sergei Krikalyov and US astronaut William Shepherd, into orbit. On November 2, the spacecraft docked with the station which then became permanently inhabited. The Soyuz TM-31 – Zvezda – Zarya – Unity complex weighing about 73 metric tons was established.

Consecutive main expedition crews, including Russian cosmonauts and NASA astronauts, started spending several months each aboard the station and were rotated by US space shuttles. Russia's Soyuz spacecraft which have a long endurance served as rescue pods in case of emergency and were replaced every six months when Russian expeditions arrived back to Earth.

On February 8, 2001, US Space Shuttle Atlantis STS-98 orbited the Destiny Laboratory Module and docked it with the ISS. At that time, the station comprised the Soyuz TM-31 manned spacecraft, the Zvezda Service Module, the Zarya Functional Cargo Block, as well as the Unity and Destiny modules weighing about 105 metric tons.

On July 14, 2001, US Space Shuttle Atlantis STS-104 docked with the ISS and delivered the Quest airlock. On September 17, the Progress M-SO1 cargo craft delivered the Pirs docking compartment to the station's Russian segment, bringing its total weight to about 140.5 metric tons. The Pirs also acts as an airlock during spacewalks.

In subsequent years, a system of powerful solar arrays was deployed. To ensure spacewalk operations a mobile transport system with a Canadian-made remote manipulator system, Canadаrm-2, was installed.

Supplies to the ISS were sent by Russian Soyuz-class manned spacecraft and Progress automated cargo ships, as well as US space shuttles. Russian supply ships regularly deliver fuel to the ISS to accomplish maneuvers with jet engines, which are only available in the Russian segment.

NASA Astronauts From ISS Wish World Merry Christmas and Happy New Year
Following the Columbia Space Shuttle disaster on February 1, 2003, which killed all seven crew members, the flights of other space shuttles – Endeavor, Atlantis, and Discovery – were suspended. The construction of the American segment of the ISS also stopped. Until the United States resumed its space flights, the station's operation was maintained with Russian systems.

In 2005, US space flights resumed and the assembly of the ISS continued. New solar arrays were delivered to the station, significantly enhancing its power capacity.

In October 2007, the utility hub Harmony, also known as Node 2, built in Italy for the United States, was delivered to the ISS. In November, it was berthed to its final destination at the forward end of the Destiny Laboratory. In December 2007, the European Space Agency's (ESA) Columbus Module was delivered to the ISS for permanent installation. In 2008 and 2009, the Japanese Experiment Module Kibo (Hope) was installed at the ISS.

On May 29, 2009, the ISS crew was increased from three to six. On February 3, 2010, members of the International Space Station Control Board said the ISS would be able to operate after 2015.

In February 2010, the Cupola Module, an observatory used to view Earth, docking spacecraft and crew members working in outer space, was delivered to the ISS (its name derives from the Italian word cupola, which means "dome") alongside the Tranquility module (Node 3), which contains an additional life support system to recycle waste water for crew use and supplements oxygen generation needed to keep the crew alive.

In May 2010, Shuttle Atlantic STS-132 delivered the Russian Mini-Research Module 1 Rassvet. In May 2011, the Space Shuttle Endeavor delivered the Alpha Magnetic Spectrometer (AMS-02) to the ISS.

In 2011, the 30-year US Space Shuttle Program came to an end as the spacecraft had passed their life span and due to the enormous financial costs involved in their preparation and servicing.

More than 200 people from 15 countries have visited the ISS.