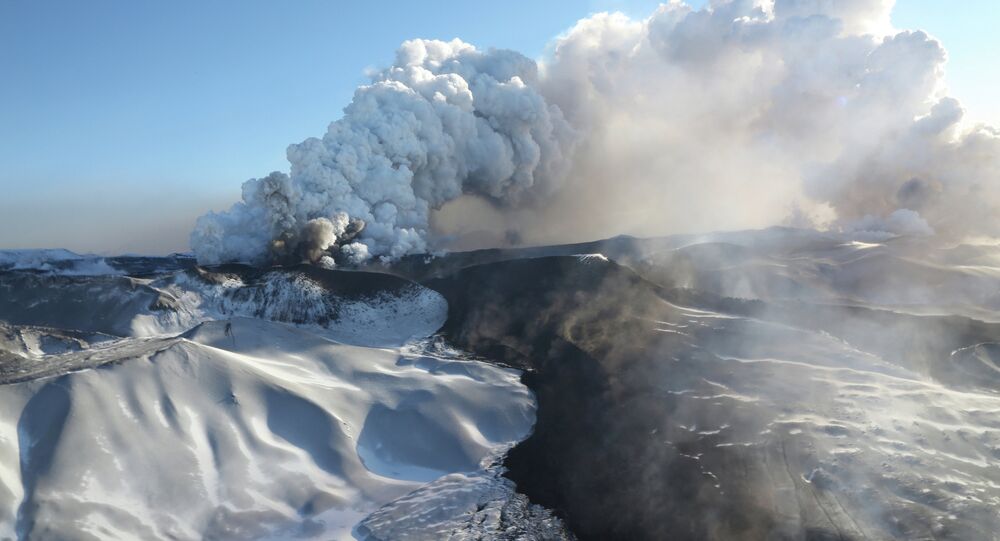 The effect of volcanic eruptions on mitigating the global rise in temperatures has been underestimated.

© Wikipedia / Alpsdake
Eruption Alert Raised on Japans Tokachidake Volcano
MOSCOW, January 14 (Sputnik) – Smaller volcanic eruptions help to cool the atmosphere and are partly responsible for the slowing in global warming observed over the past decade, according to a study carried out by scientists from the Massachusetts Institute of Technology.

The findings seek to partially explain the slower rate of warming recorded in the last 10-15 years, in comparison to projections provided by climate modeling. According to the report, the decrease can be attributed to small volcanic eruptions that "produce a significant amount of aerosol particles, which reflect sunlight, in a region of the upper atmosphere that is relatively poorly monitored," the MIT said.

The MIT scientists, who published their report in the journal Geophysical Review Letters, used lidar [light radar], the Aerosol Robotic Network [remote sensing aerosol networks], and balloon-borne observations to study the atmosphere above 15 km, an area which is poorly covered by satellites, and concluded that the increase in global temperature since 2000 had been reduced by 0.05 to about 0.12 degrees Celsius as a result of volcanic activity "from about a dozen modest eruptions around the world during the last 15 years."

Fiery Lava From Kilauea Volcano in Hawaii Was Creeping Towards the Town of Pahoa
The findings contribute to previous research which showed that powerful volcanic eruptions are partly responsible for a pause in global warming, and estimates that 30 to 50 percent of the discrepancy between climate modeling and the recorded change in climate can be explained by eruptions. The scientists hope that the research will help climate scientists to update their models and make more accurate predictions of changing climate.

In an article published in the journal Nature Geoscience in February last year, researchers from the Lawrence Livermore National Laboratory in California wrote that "climate model simulations without the effects of early 21st century volcanic eruptions overestimate the tropospheric warming observed since 1998." They pointed to the effects of the 1991 Mount Pinatubo volcanic eruption in the Philippines, in the aftermath of which the Earth's temperatures fell by up to 0.5 degrees Celsius in the ensuing two years.