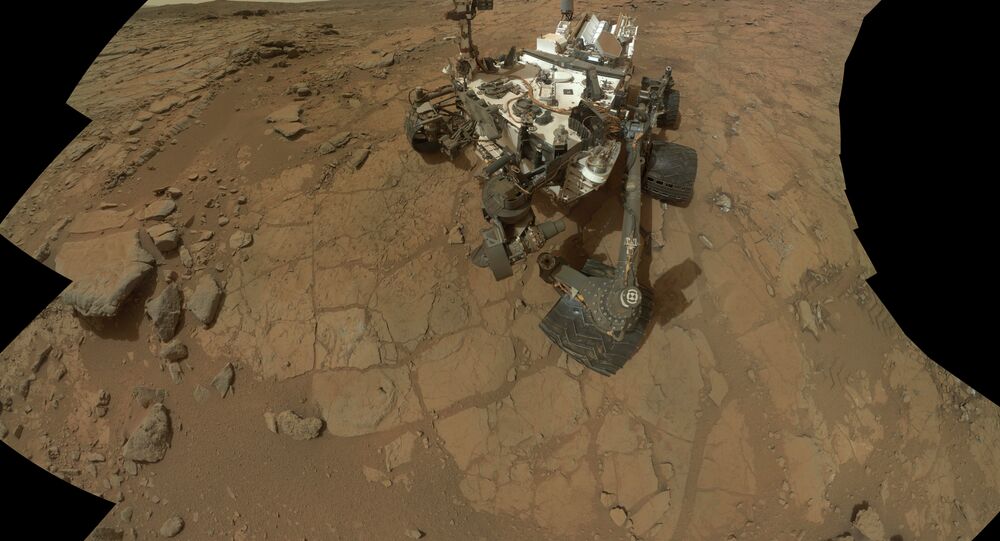 NASA’s Mars rover Curiosity has detected sharp increases in the levels of methane, an organic compound, fueling speculation of life on the Red Planet.

Certified organics! I detected organics for the 1st time on the surface of Mars #AGU14 http://t.co/TsMs5LEW8b pic.twitter.com/AVk5Wxp5G0

A change in the air: I detected a 10x spike of methane in Mars' atmosphere #AGU14 http://t.co/TsMs5LEW8b pic.twitter.com/v71ei8XDAx

The temporary tenfold increases in methane means there must be a relatively localized source, said Sushil Atreya of the Curiosity rover science team. "There are many possible sources, biological or non-biological, such as interaction of water and rock," he stated, according to a press release published by NASA.

Methane, a simple organic compound, is one of the building blocks of life. On Earth, it is mostly produced by living organisms. Its discovery could help scientists determine whether Mars ever sustained life.

© NASA . JPL-Caltech/MSSS
NASA Rover 'Curiosity' Finds Clues of Ancient Lake on Mars
"That we detect methane in the atmosphere on Mars is not an argument that we have found evidence of life on Mars, but it’s one of the few hypotheses that we can propose that we must consider,” said John Grotzinger, a scientist on the Curiosity team, as quoted by the Guardian. "Large organic molecules present in ancient rocks on Mars is also not an argument that there was once life on ancient Mars, but it is the kind of material you’d look for if life had ever originated on Mars," he told the American Geophysical Union meeting in San Francisco.

Curiosity detected several sharp increases of methane in the region in late 2013 and early 2014. The rover placed the concentration of methane in Martian atmosphere at 0.7 parts per billion by volume (ppbv).

"The background figure suggests there are about 5,000 tonnes of methane in the atmosphere," said Dr Chris Webster, from NASA's Jet Propulsion Laboratory, as quoted by BBC. "You can compare that with Earth where there are about 500 million tonnes. The concentration here at Earth is about 1,800 ppbv."

Curiosity landed on Mars in 2012. Since then, the rover has been exploring the 96-mile-wide Gale crater, believed to be a bed of a freshwater lake.

"This lake was large enough it could have lasted millions of years — sufficient time for life to get started and thrive, sufficient time for lake sediments to build up and form Mount Sharp," said Michael Meyer, Mars Exploration Program lead scientist at NASA Headquarters in Washington, said during a press conference today, as quoted by the Associated Press.