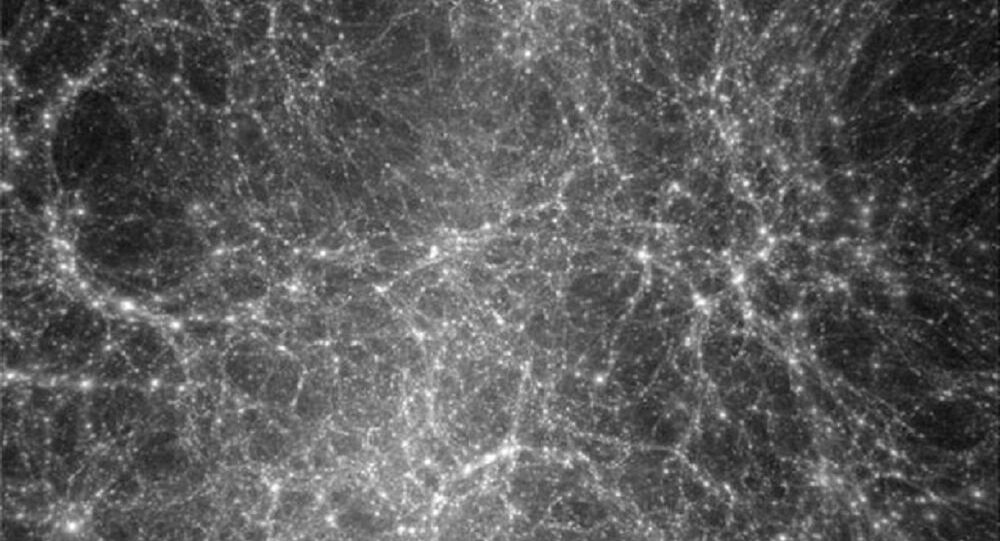 Scientists hope they now have tangible proof of the existence of dark matter, as they have discovered what they think might be traces of the elusive material coded in X-rays which are being emitted by two bright objects in the sky.

MOSCOW, December 14 (Sputnik) – Scientists at the Swiss Federal Institute of Technology Lausanne (École Polytechnique Fédérale De Lausanne) say they have picked up an atypical photon emission in X-rays coming from space, according to a press-release that has been posted on the official website of the institute.

This could be tangible evidence of the existence of dark matter in the universe, said the researchers after analyzing X-ray data collected from the European Space Agency’s XMM-Newton space telescope.

A weird spike in emissions coming from the Andromeda galaxy and the Perseus galaxy cluster cannot be  explained by any known particle or atom.
Signs of this signal have been found in our home galaxy, the Milky Way, as well.

This led the team of the EPFL's Laboratory of Particle Physics and Cosmology (LPPC) and Leiden University to believe that it may have originated in dark matter, a proposed material that is thought to have an invisible mass and account for approximately 84.5% of the total matter in the universe, according to the Cambridge Planck Analysis Centre at Cambridge University’s Kavli Institute for Cosmology. Stars, galaxies, planets, and all of the other matter we’re familiar with makes up the remaining 15.5%.

© East News / Eyevine
World’s Biggest Eye on the Sky Greenlit for Construction
“The signal’s distribution within the galaxy corresponds exactly to what we were expecting with dark matter, that is, concentrated and intense in the center of objects and weaker and diffuse on the edges,” study, author Oleg Ruchayskiy said in a news release.

“With the goal of verifying our findings, we then looked at data from our own galaxy, the Milky Way, and made the same observations,” added co-author Alexey Boyarsky.

The researchers think that the signal could have come from the destruction of a dark matter candidate particle, possibly the hypothetical sterile neutrino. That’s because it is believed the decay of these particles, which are cousins of electron-like particles called neutrinos, could produce X-rays.

Their research will be published next week in the scientific journal Physical Review Letters.

When physicists study the dynamics of galaxies and the movement of stars, they are confronted with a mystery, according to the press release.

If they only take visible matter into account, their equations simply don't add up: the elements that can be observed are not sufficient to explain the rotation of objects and existing gravitational forces. There is something missing. From this they deduced that there must be an invisible kind of matter that does not interact with light, but does, as a whole, interact by means of the gravitational force.

The enormous galaxies and clusters of galaxies that populate the universe weigh just a fraction of the mass of the massive, unseen dark matter ‘halos’ that anchor them.

Russia to Start Deploying Own Space Station in 2017: Reports