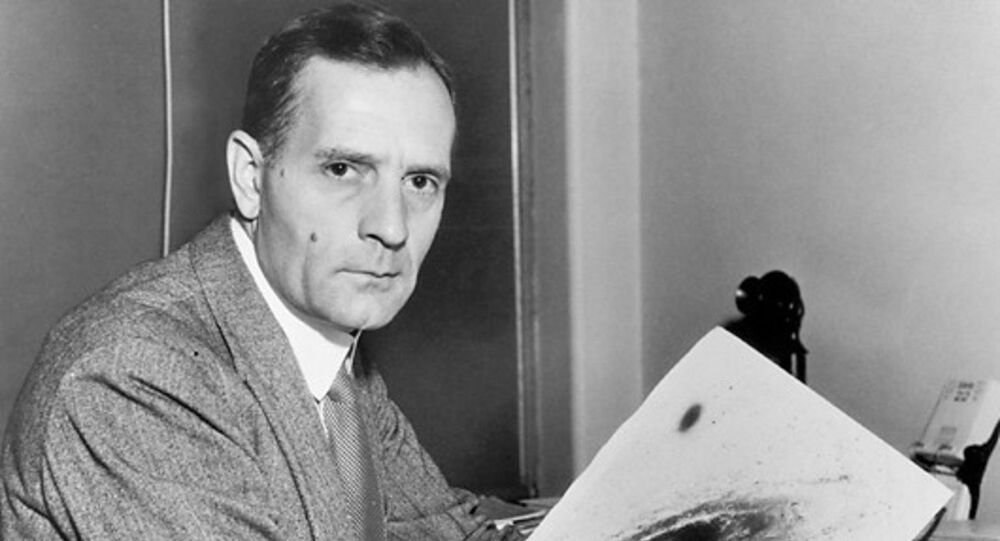 US astronomer Edwin Powell Hubble, the founder of extragalactic astronomy and the namesake of the famous space telescope, was born 125 years ago.

MOSCOW, November 20 (Sputnik) — Thursday marks the 125th anniversary of US astronomer Edwin Powell Hubble, the founder of extragalactic astronomy and the namesake of the famous space telescope.

Edwin Hubble, the first astronomer to find evidence that the universe is expanding, was born on November 20, 1889 in Marshfield, Missouri, into the family of an insurance executive.

In 1910, Hubble graduated from the University of Chicago with a Bachelor of Science before going on to study jurisprudence at The Queen's College, Oxford University in England. He returned to the United States three years later and worked for a year as a lawyer in Kentucky.

In 1914, Hubble decided to become an astronomer. He enrolled as a graduate student at the University of Chicago, where he studied the skies at the Yerkes Observatory, and received a PhD in 1917.

In 1917, he was invited to work at the new Mount Wilson Observatory in California. At the time, the United States had just entered World War I, and Hubble enlisted in the US Army. His unit was sent to France where he was wounded by a shell fragment in November 1918.

In 1919, Hubble was discharged from the Army with the rank of major and returned to Mount Wilson Observatory. The observatory boasted the world's largest telescopes at that time, equipped with 60-inch and 100-inch reflectors.

Hubble studied galactic nebulae or cloudlike formations in space. In 1922, he suggested classifying visible nebulae into extragalactic (galaxies) and galactic (gas-dust). Between 1924-1926, Hubble managed to discover stars in nearby galaxies using telescope images and therefore proved that the galaxies were, in fact, star systems similar to our own Milky Way galaxy.

In 1925, Hubble compiled the first detailed system that classified galaxies according to their shape, which laid the groundwork for today's classification system. Based on the galaxies' luminous density, he worked out a number of criteria to estimate distances between the Earth and the remotest galaxies. In 1927, he was elected to the National Academy of Sciences and later became a member of several foreign academies.

In 1929, the scientist discovered a relationship between the speeds of galaxies and the distance between them and the Earth (Hubble's law). He was also able to calculate a ratio expressing the relationship known as Hubble's constant.

This discovery formed the observational foundation for the concept of an expanding and evolving Universe.

Until the beginning of World War II, Hubble researched the phenomenon of the expanding universe studying more and more remote galaxies. The results of his research on extragalactic astronomy were detailed in the books "The Realm of the Nebulae" (1936) and "The Observational Approach to Cosmology" (1937).

When World War II broke out, the astronomer left Mount Wilson Observatory to work for the US Army at the Aberdeen Proving Ground where he headed the external ballistics department. In 1946, he was awarded the Medal of Merit for his research. His other awards include the Barnard Medal (1935), the Bruce Medal of the Astronomical Society of the Pacific (1938), the Franklin Medal of the Franklin Institute (1939) and the Gold Medal of the Royal Astronomical Society (1940).

After the war, Hubble returned to work at Mount Wilson Observatory. He was involved in developing the 200-inch Hale Telescope at Palomar Observatory and took the first photos with this telescope.

Edwin Hubble died in San Marino, California, on September 28, 1953. The discovery of Hubble's law was one of the most important contributions to 20th century science. He is called the greatest astronomer since Nicolaus Copernicus and has also been compared to Galileo Galilei and Sir Frederick William Herschel. At the end of his life, he also advocated a ban on weapons of mass destruction.

A crater on the Moon and an asteroid are named in Hubble's honor. The Hubble Space Telescope has been orbiting the Earth since 1990.