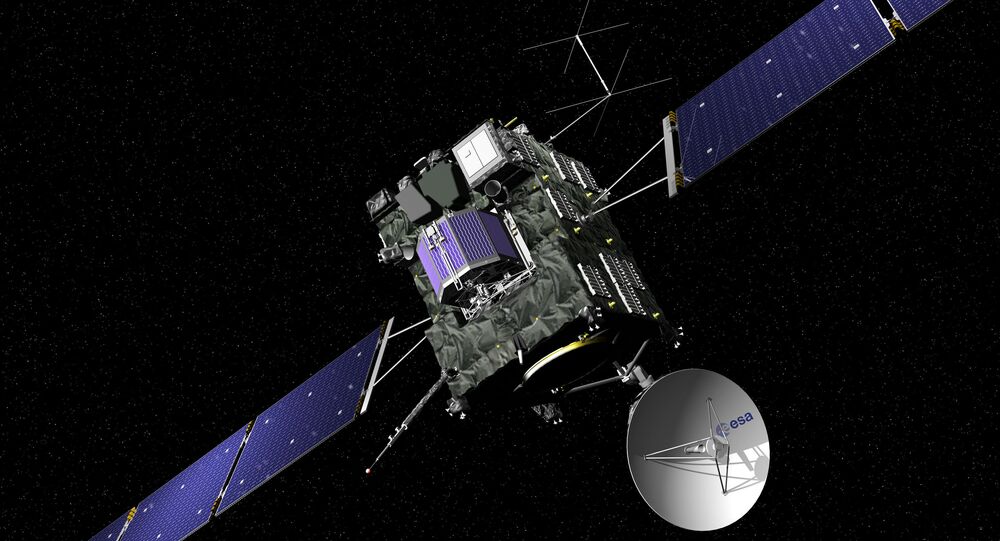 The European Space Agency's Rosetta spacecraft has launched the Philae probe to the 67P/Churyumov-Gerasimnenko comet, 500 million kilometers from Earth.

MOSCOW, November 12 (RIA Novosti) — In an event anticipated by the European Space Agency for over 20 years, the agency’s Rosetta spacecraft has launched the Philae probe to the 67P/Churyumov-Gerasimenko comet, 500 million kilometers from Earth.

The 100 kilogram probe, about the same size as a washing machine,  will attempt to latch onto the surface of the comet, after which its legs will screw it onto the surface, the BBC explained. Due to the vast distances, it will take nearly 30 minutes for signals from the probe to reach the ESA’s communications center at Darmstadt, Germany. The probe will rely on NASA’s Deep Space Network of communication antennas.

The probe will attempt to land on the ‘head’ of the ‘duck-shaped’ comet, nicknamed Agilkia by ESA officials after the island on the river Nile. The landing spot was chosen for being relatively free of boulders, but there are no guarantees of success, the area being far from flat, with deadly cliffs, fissures, slopes and ridges nearby. The National Post likened the process “to flying over a city and trying to hit a specific spot with a balloon.”

ESA lander chief Stephan Ulamec from the German Space Agency gave the mission a 75 percent success rate, while Ian Wright, who also worked on the lander, told the BBC that the risky landing “is part of the excitement of the whole thing. Exploration is like that: you go into the unknown, you're unsure of what you're going to face.”

In the event of a successful landing, the Philae will drill 20 cm into the comet, and will send back data from nine instruments, searching for organic molecules, analyzing the atmosphere's composition and collecting other information for the probe’s on-board laboratory to analyze. The lander has about 64 hours-worth of battery life to conduct its experiments.

The mission, which is the first attempt to land a human-made craft on a comet, was heralded by the BBC as an “opportunity to sample directly a cosmic wonder”. Rosemary Young, program director for Rosetta at the United Kingdom Space Agency, said it holds major practical scientific potential as well: “We can do a certain amount of analysis from a distance, but we cannot see what’s on the surface or what’s below the surface in any great detail. We hope to drill down deep enough to get to the primitive grains below the surface that were around when the comet first formed,” Ms. Young told the Independent.

Scientists observing the project hope that a close analysis of the comet may bring humanity closer to an understanding how the solar system evolved; theories abound that comets were responsible for delivering waters to planets, or perhaps even ‘seeded’ Earth with the chemical components which later turned into life forms, the BBC explained.

The ESA has had to overcome several problems with the Philae in recent hours, including issues with its thruster system, used for maneuvering the probe toward the comet, and having to reboot the probe after its failure to start properly.

Young explained the difficulty of the landing, noting that “nobody knows what’s going to happen. It is supposed to be a soft landing but the Philae lander will have to take the impact on its legs, there are no rocket thrusters involved.” She added that “one of its problems will be to stay down. The comet’s gravity is just one hundred thousandth of that on Earth, and if it lands on a slope greater than 45 degrees it will just fall over.”

Although the planning for the mission began over 20 years ago, the current $1.6 billion endeavor officially began March 2, 2004, when the Ariane 5 rocket propelled Rosetta into space, carrying its Philae lander on its back. Since then the craft has traveled a distance of 6.4 billion kilometers over ten years before finally entering the orbit of the 67P/Churyumov-Gerasimenko comet in September, 2014.

The Rosetta is a 7 foot cube with a 105 solar panel wingspan; on its travels it went several orbits around Earth and Mars, which acted as a ‘slingshot’ to propel the craft toward the comet.

The mission has already revealed some amazing close-up photos of the comet. On Tuesday, the ESA released an audio clip of eerie oscillations being picked up by the Rosetta’s magnetometer in August, which sound much like the Predator from the famous 80s Hollywood film. The organization has also been able to give readings of chemical compounds present on the comet, including hydrogen sulfide, ammonia, and formaldehyde.

Even if Philae’s mission fails, ESA officials have said that 80 percent of its mission will be completed by the Rosetta spacecraft itself.

The Churyumov-Gerasimenko comet, designated 67P/C-G, was named after its discoverers, Klim Churyumov and Svetlana Gerasimenko. The astronomers discovered the comet in 1969, with Churyumov making the discovery at the Kiev Astronomical Observatory after scanning photographic plates created at the Alma-Ata Astrophysical Institute by Gerasimenko.

The exciting landing attempt is being streamed live by the European Space Agency, and can be found on the agency’s website here.

US to Continue Space Cooperation With Russia: White House