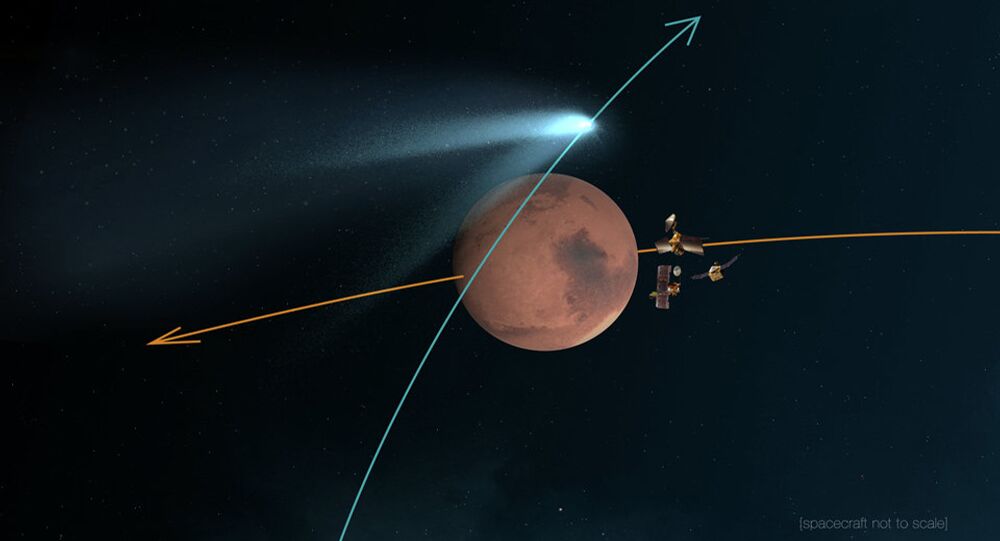 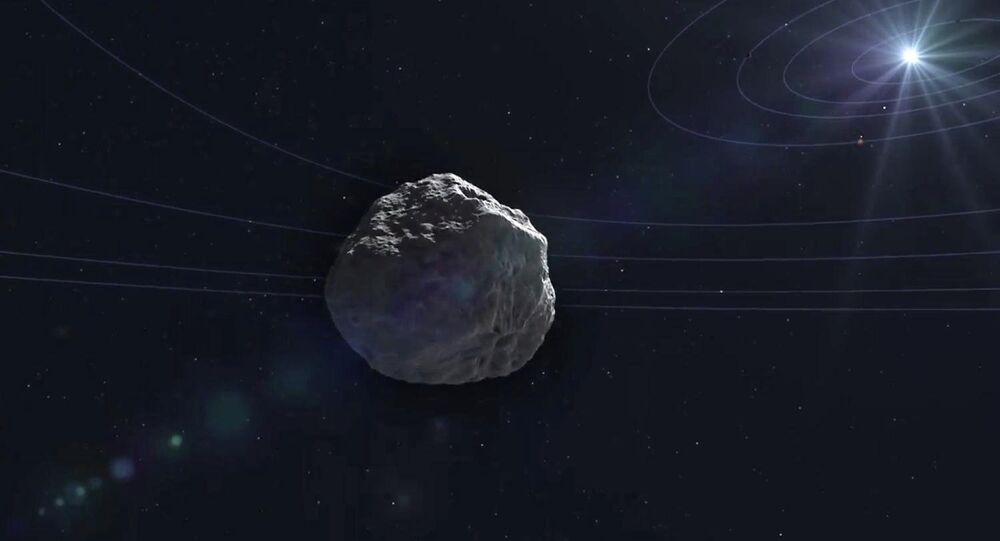 The “Siding Spring” comet that approached Mars last month, has had an unexpectedly heavy impact of the Red Planet’s atmosphere, NASA says.

MOSCOW, November 10 (Sputnik) — An ancient comet from a distant part of our Solar System passed closely by the Red Planet last month, causing a once-in-8-million-years star shower, and dropped several tonnes of cosmic dust onto Mars’ surface and added layers of ions to its atmosphere.

Comet C/2013 A1 ‘Siding Spring’, originated from the mysterious Oort cloud of the outer Solar system, approached Mars at a close distance on 19 October, but it was not until last week, when NASA has accumulated data from space probes surrounding the Red Planet, that the impact of the comet’s tail on the Martian atmosphere was discovered. The data was gathered by the Mars Atmosphere and Volatile Evolution (MAVEN) orbiter probe and the Mars Reconnaissance Orbiter (MRO), as well as the European Space Agency’s (ESA’s) radar spacecraft called Mars Express.

The most evident effect caused by the comet’s close flyby to Mars was a spectacular meteorite shower, as debris of rock and ice from the ‘Siding Spring’ tail (or coma) entered the Red Planet’s atmosphere at high speed, burning and vaporizing soon thereafter. Unfortunately, the visual effect was not documented on video. But the probes have documented changes in the Martian atmosphere during the ‘Siding Spring’ flyby for the first time in our history. The orbiters registered that a thick layer of ions was added to Mars’ ionosphere. Additionally, dust from the comet, composed of potassium, manganese, nickel, magnesium, iron, sodium, chromium and zinc was deposited onto the planet’s surface.

The comet flew by Mars at a distance of 87,000 (139,300 km) miles, which is about one-third the distance between the Earth and the Moon. The comet’s tail was ten Mars’ diameters away from the planet at its closest. This is why the scientists were surprised with the intensity of the effects the ‘Siding Spring’ flyby caused in Mars’ atmosphere. This is the first time a comet’s flyby has caused a strong ionization, scientists say. The magnesium, deposited by the comet, brought alterations to the electromagnetic field of the planet. The ions of iron caused a significant ultraviolet increase in the atmosphere, culminating within two hours after the comet’s closest approach and fading only after two days.

During the comet’s actual flyby, NASA and ESA had to hide their spacecraft on the opposite side of Mars’ orbit because they feared the comet could have damaged the orbiters.

“I really believe that hiding them like that really saved them, and it gave us a fabulous opportunity to make these observations […] We believe this type of event occurs once every eight million years or so, so it is indeed a rare opportunity for us to observe this,” Jim Green, the director of planetary science at NASA said as quoted by the Betawired blog.

"We never before had the opportunity to observe an Oort Cloud comet up close," Green said to Fox News. "Instead of going to the comet, it came to us." He added that Opportunity and Curiosity rovers which are on Mars’ surface now, were looking up during the meteor shower, and took photographs of the event, which have not yet been published.