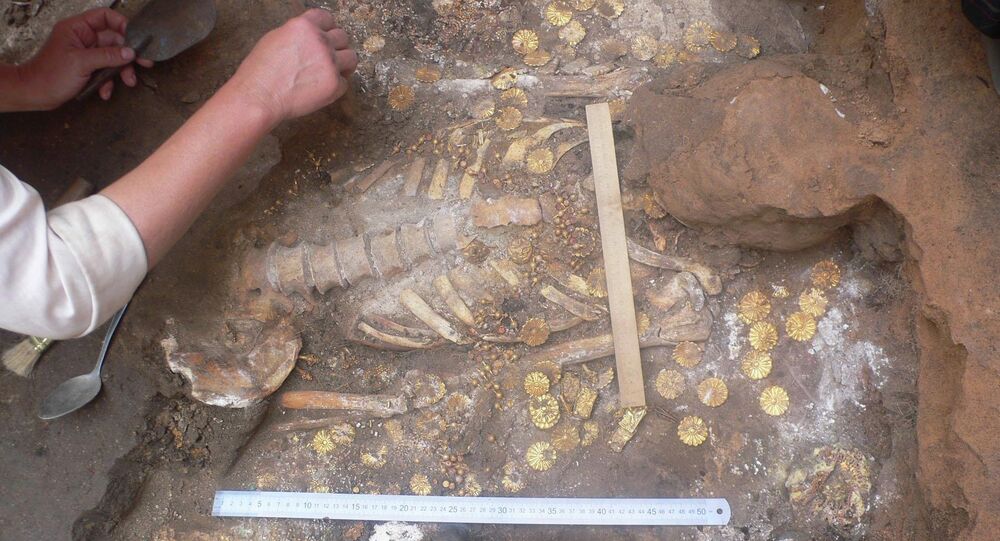 Archaeologists have found the intact burial chamber of a noble woman from a powerful tribe that roamed the Eurasian steppes 2,500 years ago in southern Russia, an official said Tuesday.

MOSCOW, August 6 (RIA Novosti) – Archaeologists have found the intact burial chamber of a noble woman from a powerful tribe that roamed the Eurasian steppes 2,500 years ago in southern Russia, an official said Tuesday.

The Sarmatians were a group of Persian-speaking tribes that controlled what is now parts of southern Russia, Ukraine and Central Asia from around 500 BC until 400 AD. They were often mentioned by ancient Greek historians and left luxurious tombs with exquisite golden and bronze artifacts that were often looted by gravediggers.

But the burial site found near the the village of Filippovka in the Orenburg region has not been robbed – and contained a giant bronze kettle, jewelry, a silver mirror and what appears to be containers for cosmetics, said history professor Gulnara Obydennova who heads the Institute of History and Legal Education in the city of Ufa.

“The find is really sensational also because the burial vault was intact - the objects and jewelry in it were found the way they had been placed by the ancient nomads,” she told RIA Novosti.

The vault – located 4 meters (13 feet) underground – was found in the “Tsar Tumulus,” a group of two dozen mounds where hundreds of golden and silver figurines of deer, griffins and camels, vessels and weapons have been found since the 1980s.

The woman's skeleton was still covered with jewelry and decorations, and her left hand held a silver mirror with an ornamented golden handle, Obydennova said.

The descendants of the Sarmatians include Ossetians, an ethnic group living in the Caucasus region, who speak a language related to Persian.