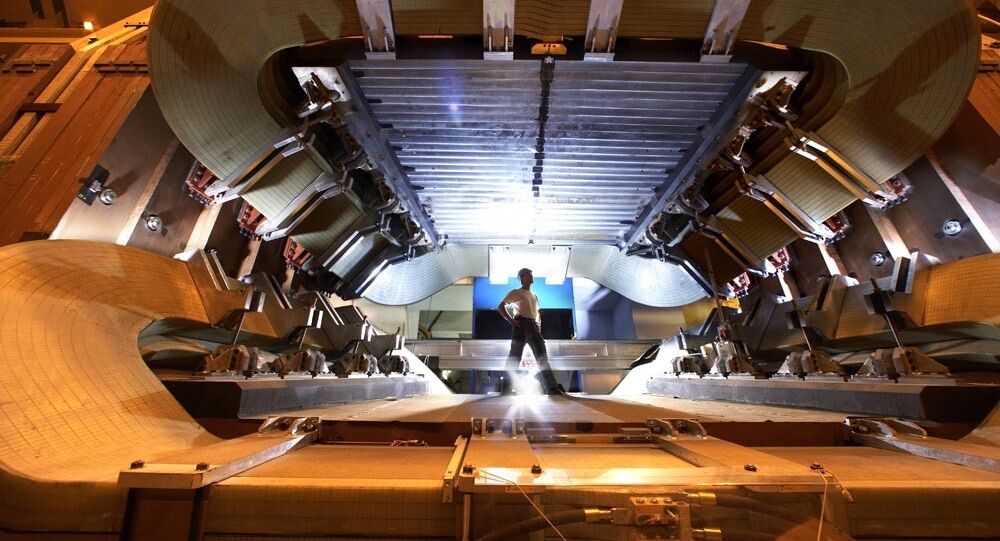 The Large Hadron Collider (LHC) will jump straight to its maximum energy without any medium-energy proton collisions, the European Organization for Nuclear Research (CERN) has said on its website.

The Large Hadron Collider (LHC) will jump straight to its maximum energy without any medium-energy proton collisions, the European Organization for Nuclear Research (CERN) has said on its website.

Experts, who gathered in Chamonix last week, revised the previous schedule according to which first physicists at the LHC were to switch to medium-energy beam collisions of 10 TeV this summer, following a short period of running at half-power of 7 TeV.

"The most important decision we reached last week is to run the LHC for 18 to 24 months at a collision energy of 7 TeV (3.5 TeV per beam). After that, we'll go into a long shutdown in which we'll do all the necessary work to allow us to reach the LHC's design collision energy of 14 TeV for the next run," Steve Myers, Director for Accelerators and Technology, said at CERN website.

"This means that when beams go back into the LHC later this month, we'll be entering the longest phase of accelerator operation in CERN's history, scheduled to take us into summer or autumn 2011," he said.

The shutdown is required to prepare the LHC for running at energies significantly higher than collisions at 7 TeV, which would require more work in the tunnel.

The $4.9-billion international LHC project has involved more than 2,000 physicists from hundreds of universities and laboratories in 34 countries since 1984. Over 700 Russian physicists from 12 research institutes have taken part.

Work to repair and upgrade the collider after the breakdown cost almost $40 mln and took over a year. A system to protect it from such accidents, named the Quench Protection System, was installed, and the first beams were injected into the LHC on November 20.