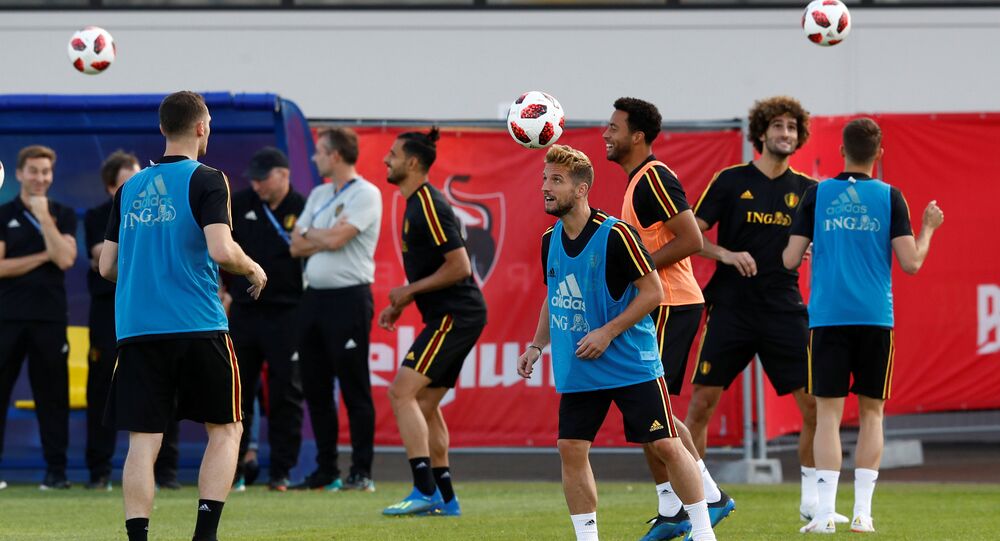 MOSCOW (Sputnik) - Belgium will face neighbors France in the 2018 FIFA World Cup semi-final match that will take place at the St. Petersburg Stadium on Tuesday at 21:00 local time (18:00 GMT).

Belgium held a full-squad training session ahead of the match at their World Cup base camp outside Moscow, while France head coach Didier Deschamps said that all his players were ready for the encounter.

The match will be attended by French President Emmanuel Macron who will fly into St. Petersburg, Russia's second-largest city, exclusively to watch his national team in action.

King Philippe and Queen Mathilde of Belgium and the country's Foreign Minister Didier Reynders are also expected to be present at the arena, while Prime Minister Charles Michel will watch the game with a group of supporters in Belgium as preparations for a NATO summit, which will be held in Brussels on Wednesday and Thursday, prevented him from traveling to Russia.

© REUTERS / Sergei Karpukhin
Belgium Holds Limited Training Session Ahead of Semi-Final Against France
More than 20,000 foreign fans are expected to watch the semi-final encounter from the stands of the 64,500-seater St. Petersburg Stadium.

Belgium are playing in their 13th World Cup finals, with their best performance being the fourth place they claimed in Mexico in 1986. In the quarter-finals of this summer's tournament, the Red Devils beat five-time champions Brazil 2-1, while 1998 World Cup winners France, who will play in the last four for the first time since 2006, beat two-time champions Uruguay 2-0.

Belgium beat France 4-3 the last time the two sides went head-to-head, in a friendly in 2015.