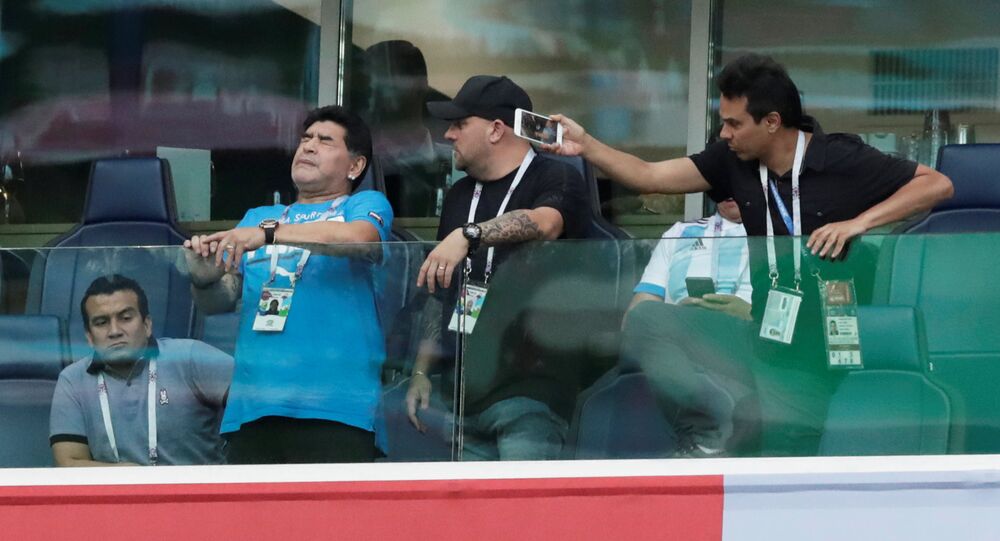 It seems that the whole world observed the full spectrum of football legend Diego Maradona’s emotions during the Argentina vs Nigeria World Cup match on Tuesday: from “bored to sleep” to so happy that he flashed middle fingers as Argentine defender Marcos Rojo drilled a game-winning volley into the bottom left hand corner with just minutes left.

Maradona has been facing a massive backlash on social media as he was spotted flipping off his middle fingers during a live broadcast while celebrating Marcos Rojo’s fortuitous goal in the 86th minute, giving Argentina a 2-1 victory over Nigeria.

READ MORE: Maradona Refutes Reports He Was Taken to Hospital After Argentina-Nigeria Match

The gesture couldn’t go unnoticed by Twitter users, who rushed to accuse Maradona of disrespectful behavior, suggesting that the gesture was meant for the Nigerian fans:

Diego Maradona is a footballing legend, but his behaviour and latest antics are far from inspiring. Again, letting himself down buy putting his fingers up to the Nigeria fans when Argentina scored.

Not what it’s all about. Nigeria have been brilliant. They deserve respect.

Maradona raised a middle finger to us and you still supported Argentina, You people are crazy, you people are mad and only God can help you

You’ve got to on sight him.

Believe me… The only thing that annoyed me about this match was Maradona giving us his middle fingers. No respect, no pride and no honour!
He was so high he couldn't even walk out of the stadium on his own.
How shameful… He just lost all my respect for him! #NGAARG #WorldCup

Maradona either sleeping or giving the double FU fingers👎👎👎

Maradona is simply a racist.
Mehn, the middle finger was totally unnecessarily, your country has scored so why that reaction?
🤷🏽‍♂

Some stressed that all eyes have been on Maradona’s antics despite Argentina’s big win:

Argentina wins, yet the only pictures you see on Twitter are those of Maradona giving the middle finger to the entire Nigerian nation.

Another user said that he should be banned from stadiums – which would be in line with FIFA’s strict code of conduct, prohibiting racist and offensive language:

This guy should be banned from stadium. He damages argentinian image. He's disgusting.

A fellow Twitterian made a reference to reports about Maradona’s hospitalization after the game, which the Argentine later denied on his Instagram:

Maradona taken to hospital. You can't show Nigerians the middle finger and live to tell the story 😂😂😂

Others, however, didn’t take Maradona’s flipping the bird seriously, describing it as “the best thing” they’ve ever seen…

…and alluding to his iconic “hand of God” goal against England in the quarter-finals of the 1986 FIFA World Cup in Mexico City:

Did Maradona just give ‘the finger’ to the fans after the goal? @GaryLineker From the hand of god to the finger of god. If so the man should be banned.

Meanwhile, some said that the gesture wasn’t racist, but he should be punished for the outburst:

I don't think the finger gesture by Maradona makes him a racist, he should be punished, I agree. But calling him a racist is a reach.

There were those who urged to stop “speculations” that the fingers were for Nigerian fans and offered their explanation:

It wasn't for Nigerian fans, stop especulating without proof. It was for a group of Argentinian journalist who had pretty harsh critics to team the days before the game. And yes he was probably super high, but that's he's problem. Hes never defined himself as an example for kids

I don't think it was at the Nigerian fans at all. From what he says "puto", it looks as though it's aimed at the Argentinean manager.

On Tuesday, Argentina’s national football squad beat Nigeria’s team 2-1 in their final Group D match to advance to the knockout stage, where they will face Group C winners France in Kazan on Saturday.