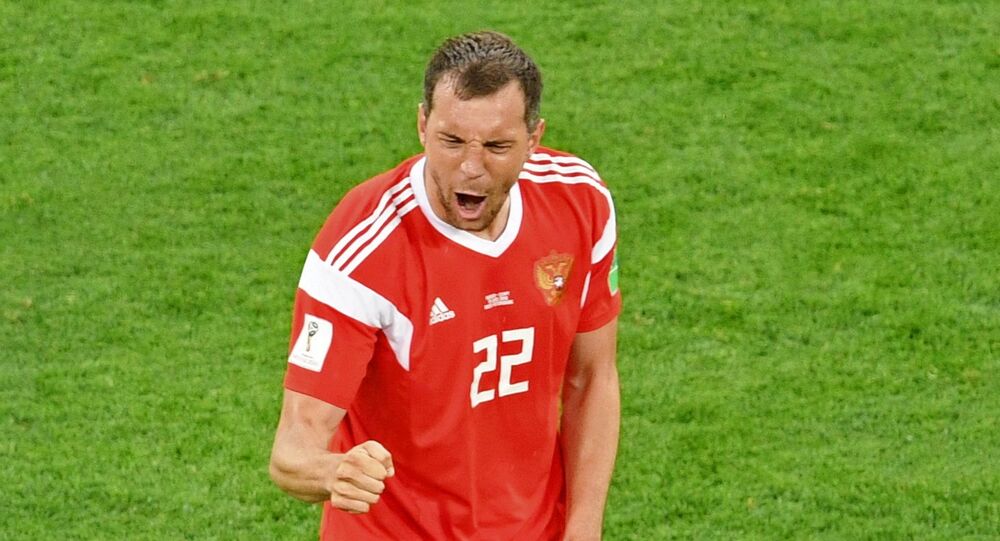 "If we examine Artem's [Dzyuba] performance in detail, he did a great job for the team but not just scored a beautiful goal. Dzyuba gave the attack depth, he forced Egyptian players to drop balls into the zones where our players were. The Russian team won almost all the knockdowns, which is very important. And that's what we have to praise Dzyuba for. Artem [Dzyuba] deserves all the plaudits for an excellent display," Ignatyev told Sputnik.

© REUTERS / FABRIZIO BENSCH
Russia Has Efficient World Cup Squad - Egypt Head Coach
This game was the first World Cup match for Egypt star striker Mohamed Salah, who pulled one back for his team from the penalty spot.

"He [Salah] had many technical failures, which is not typical of him. He didn't get to his level, he didn't play his usual high-tempo game. We should pay tribute to our defense. I don't know how Salah would have played if he had been in a better shape, but today [midfielder] Yuri Zhirkov and [defender] Sergei Ignashevich didn't let him show his worth," Ignatyev added.

Dzyuba scored Russia’s third goal of the game with an expertly taken finish. He showed great control to turn his marker, before coolly finishing to notch up his goal in as many games.

Meanwhile, Russian Deputy Prime Minister Olga Golodets, who is in charge of culture, sports and tourism in the country's government, said Tuesday night that Russia's 3-1 victory over Egypt was an "excellent result".

© Sputnik / Alexey Filippov
Russia Defeats Egypt 3-1 in Second FIFA WC Match
In addition, FC Spartak Moscow's Owner Leonid Fedun told a Sputnik correspondent on Tuesday that he hoped Russia would face Portugal in the Round of 16 at this summer's FIFA World Cup.

"Super, super, super! We dreamed about it, prayed for it and did everything to make it happen. Congratulations to everyone, I'm 99 percent sure, we will get past the group stage," Fedun said.

Russia will play against Uruguay in their final group-stage match at the Samara Arena on Monday.