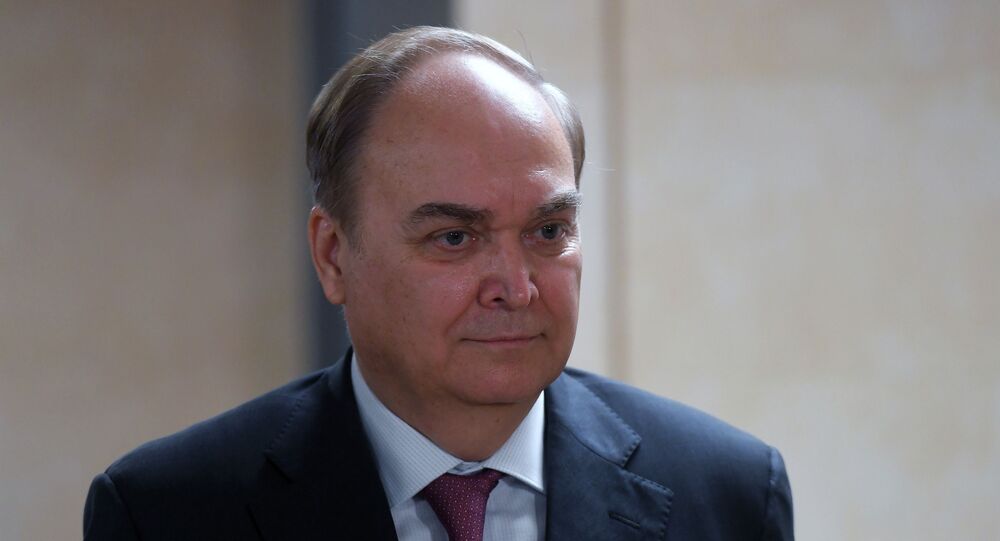 US Politicians Try to Use Ukraine to Punish Moscow for Independent Foreign Policy, Ambassador Says

WASHINGTON (Sputnik) - Russian Ambassador to the United States Anatoly Antonov during an interview said some US politicians are only interested in using Ukraine as a tool to change Moscow's independent foreign and economic policy.

"It seems to me that some [US] political figures, some [US] politicians only would like to use Ukraine as a tool to press on Russia to change Russia's independent foreign policy, Russian economic policy," Antonov told RT on Tuesday when asked about American opposition to Nord Stream 2.

He added that US behavior is exactly what Washington calls "harmful activity" and attributes it to Russia.

The Russian ambassador said that he does not understand what political interests the US administration has in Ukraine since Ukraine is too far away from the US.

He also stated that he discussed the issue with "many politicians," and sometimes, some of them did not "know where Ukraine is."

Antonov emphasized that the Nord Stream 2 pipeline is purely for economic purposes, meant to diversify the energy market.

The United States and Russia should focus on working together to confront issues related to international terrorism, Afghanistan post-US exit, and climate change, Antonov said.

The Wall Street Journal reported earlier on Tuesday that US and German officials have reached an agreement that will allow for the completion of the Nord Stream 2 gas pipeline between Russia and Germany and are expected to announce the deal as soon as Wednesday.

Earlier this month, Ukrainian President Volodymyr Zelensky characterized the Nord Stream 2 gas pipeline between Russia and Western Europe as a weapon that Moscow may use against his country.

And according to the recently reported draft text of the agreement between the US and Germany, both sides agreed in an upcoming deal that if Russia tried to use energy as a "weapon" against Ukraine, it would face sanctions and other measures, though it did not define what activities would trigger such countermeasures.

© AP Photo / Dmitry Lovetsky
US, Germany Threaten Retaliatory Action Against Russia in Draft Nord Stream 2 Accord - Report
Moreover, the United States and the EU have agreed that the pipeline should not be used to exert pressure on Ukraine and that Kiev should continue to have gas transit. However, Russia has long maintained that the pipeline project is solely commercial in nature and has asked others not to politicize the situation.

As a vocal opponent of Nord Stream 2 since its beginning in 2012 and a self-proclaimed proponent of European energy independence, Washington has imposed sanctions on companies and persons engaged with the project on multiple occasions.

Relations between Moscow and Kiev deteriorated amid the situation in the Donbass region after the coup d'etat in Ukraine in February 2014.

The Ukrainian authorities have previously repeatedly accused Russia of interfering in the country's internal affairs. In January 2015, Ukraine's parliament, the Verkhovna Rada, adopted a statement in which Russia was called the "aggressor country". Russia vehemently denies the accusations of the Ukrainian officials and calls them unacceptable. Moscow has repeatedly stated that it is not a party to the internal Ukrainian conflict and is interested in Kiev overcoming its political and economic crisis.

US, Russia Intend to Work Bilaterally on Climate Issues, Including Emissions