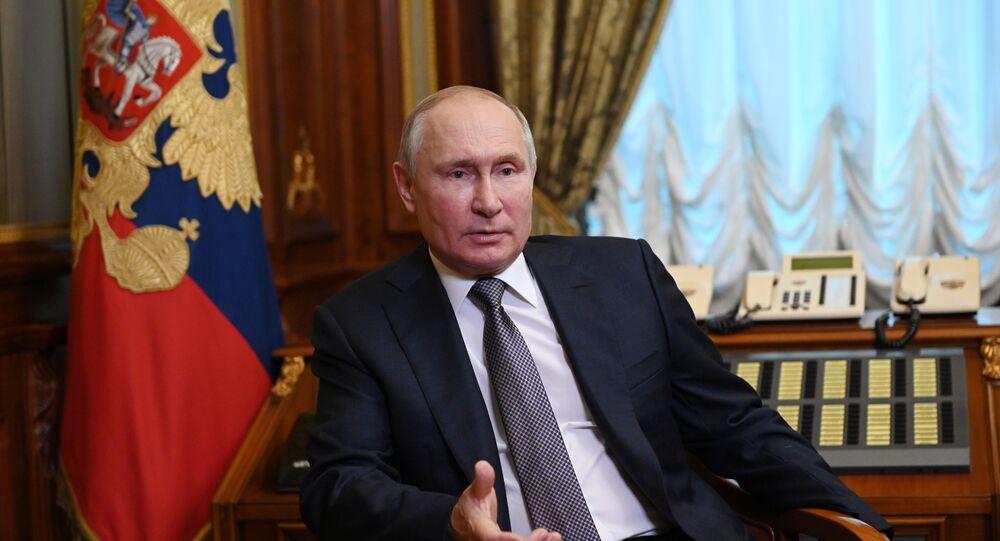 Russian President Vladimir Putin has written an extensive article pondering the historical unity of Russians and Ukrainians, releasing it earlier in the week. The Ukrainian president, however, did not appear to share the sentiment and rejected Putin's belief that Ukrainians and Russians are "brotherly" people.

Commenting on the Monday article about the peoples of Russia and Ukraine, Russian President Vladimir Putin said that he had been thinking about producing his writings for several months, referring to it as "analytical material based on historical facts, events, on historical documents."

The Russian President revealed the origin of the article idea, saying that the situation required a closer look at our world.

"...The situation required so that we take a closer look at what world we live in, who we are, what are our relations with our closest relatives and neighbors. Therefore, this idea arose precisely in this connection", the president explained on air with the Rossiya 24 broadcaster, noting that it is important to understand the real state of affairs based on the historical context of "how we came to the current situation".

The Russian president voiced particular concern in regard to what he said was the beginning of "active work on the 'anti-Russia' project".

"In addition, why did I step up this work right now, because conditions are emerging that are qualitatively changing in comparison with what was quite recently. Apparently, active work on the 'anti-Russia' project has begun, which, of course, cannot but cause our concern," Putin said.

Elaborating on the concept of the Western 'anti-Russia' project, the president said it dates back to the 17th and 18th centuries, with a goal to weaken the country.

"It began in the 17th-18th centuries, then was used by the Polish national movement, before World War I it was used by Austria-Hungary. The goal is simple, I write there — divide and rule. The First World War had a simple goal for Russia's potential adversaries: simply to weaken the country," he said.

The current situation, according to Putin, is that "millions of people" in Ukraine want to restore relations with Moscow, but they are not given the chance to do so, as "political forces" that "support this normalization" are not provided with chances to fulfill their plans.

"They are simply removed from the political scene in an unsystematic, illegal way: someone is simply killed on the street and after that, no one is looking for criminals. Or they are burned alive, as was the case in during the tragic events in Odesa," Putin said.

The Russian president outlined that every country has the right to choose its own path, but such choices should not pose a security threat.

"Yes, of course, any country has the right to choose its own path. This is not disputed. You know, just like any person: he is free. There is such a well-known formula: the freedom of each person is limited by the freedom of other people. If it conflicts with the freedom of another person, then you need to think about some kind of restrictions, self-restraints. The same applies to states," Putin said.

When explaining to whom his article is addressed, the president specified that he did not separate "them" or "us", noting that, apart from the peoples of Russia and Ukraine, his writings are also addressed to the sponsors of political leadership in today's Ukraine. In regard to the latter, Putin expressed his hope that Ukrainian leaders will read and analyze his article.

"If there is a desire to discuss, I think that they need to take a break, carefully read this article first, analyze, see the documents. I think they will do so. They will find something to talk about here. When I say 'they,' I mean the political leadership of today's Ukraine," Putin said.

Following the publication of the article on Monday, Ukrainian President Volodymyr Zelenskyy expressed his readiness to discuss some of his Russian counterpart's points voiced during a tete-a-tete. Zelenskyy, however, revealed that he hasn't had a chance to familiarize himself with the entire article, having only read "parts".

While calling for a dialogue with the Kremlin - something that Moscow outlined it is ready for - Zelenskyy refused to agree with Putin's assertion that Russians and Ukrainians are brotherly people.

On the Historical Unity of Russians and Ukrainians