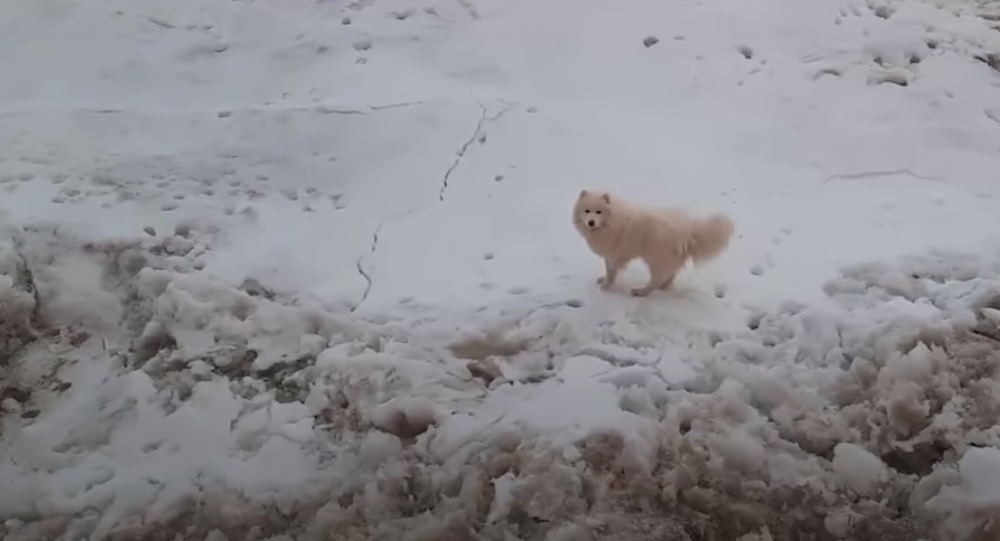 Svetlana Chereshneva, the owner of the one-year-old Samoyed, told Russian media that the fluffy white pooch had been missing since he ran through the open door of her home on May 21.

Crewmembers of the Alexander Sannikov icebreaker are being heralded as heroes after successfully executing a rescue operation to save Aika, a one-year-old Samoyed, from the Russian Arctic coast village of Mys Kamenniy.

The mission, carried out earlier this month, was captured on video after Gazpromneft-Yamal workers first spotted the fluffy white pooch.

Despite ice shard damage to her paws, Aika can be seen wagging her tail as the vessel approaches her slab of Arctic ice.

A ramp was then extended for the dog to climb aboard.

"We investigated all options for lifting the animal from the ice, and placed a ceremonial ladder which the dog used to get on board," said Yevgeny Nagibin, assistant to the captain of the icebreaker.

"Later we used mobile communications to contact locals, found the dog owner, and a few hours later the animal was safely returned to the village."

Aika has since been transported back to her Mys Kamenniy home.

Chereshneva confirmed to Russian outlets that she has reunited with her once-lost companion.

"But after all these adventures she doesn’t go far from us and doesn’t rush to go outside," she said, noting that Aika's appetite returned after resting during the first day back.

Family Rescued From Car Swept Away By Flood in New Mexico