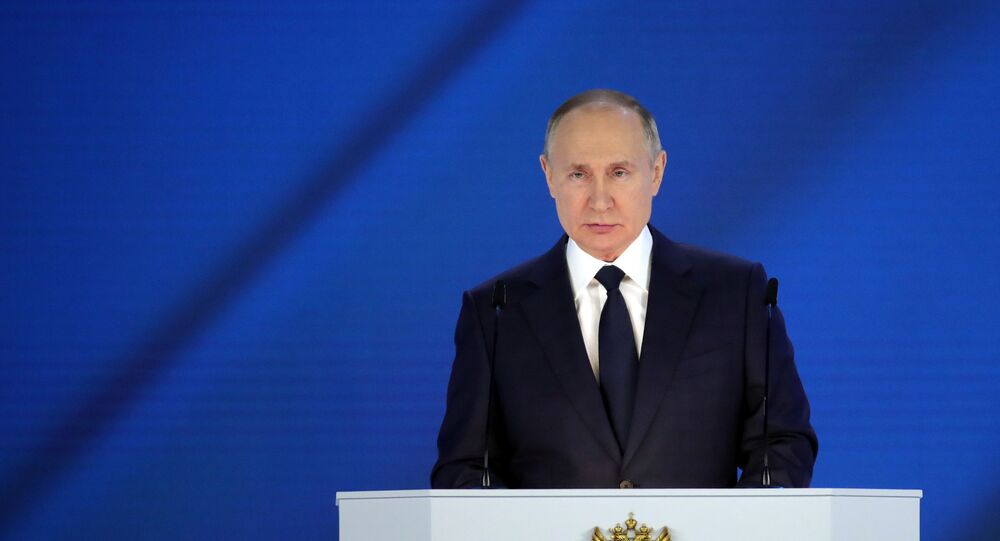 Vladimir Putin's address is a firm response to the undue pressure imposed by the US and Europe on Russia, say international observers, suggesting that the need to solve global issues offers hope for a constructive dialogue between the world's major players.

Moscow will find "asymmetrical" ways to defend its national interests if other nations reject a constructive dialogue, stated President Vladimir Putin during his annual address to lawmakers on 21 April.

The president pointed out that in some countries "a nasty custom has taken root" to point the finger at Russia on any pretext, apparently perceiving Moscow's self-restraint and good will as a sign of weakness. Putin expressed hope that no foreign nation would attempt to cross any of Russia's "red lines."

'Necessary Reply to Unduly Pressure From US, EU'

"The remarks of the Russian president, in particular those relating to not crossing the 'red line' and the fact that Russia is ready to respond even with harsh answers, are part of the classic tradition of the head of the Kremlin: firmness and clarity," says Tiberio Graziani, chairman at the Vision & Global Trends International Institute for Global Analyses.

Remarkably, Putin has shown that it wasn't Moscow's intention to interrupt the dialogue in the first place, the scholar highlighted. The Kremlin leaves the door open even for those who resorted to Washington's "expulsion" spree, according to Graziani.

At the same time the Russian president's firm response is no surprise given the US' "really offensive accusations" against Moscow and interference in the country's domestic affairs, believes Paolo Raffone, a strategic analyst and director of the CIPI Foundation in Brussels.

"It was a necessary reply from President Putin to the unduly made pressures from the Western countries on Russia," he stresses.

© AFP 2021 / Wojtek RADWANSKI
US soldiers are pictured prior the beginning of the official welcoming ceremony of NATO troops in Orzysz, Poland, on April 13, 2017.

While the vector of relations between Russia and Western countries should have been key to finding a common ground for security, stabilisation, and progress, "there is a part of the American administration that is still stuck in the old Cold War time and wants to replicate those times today in the need of finding appropriate enemies," Raffone underscores.

One glaring example of this persisting Cold War mentality is the expansion of NATO eastwards, which continued after the collapse of the USSR and Warsaw Pact, notes Jo Jakobsen, political science and international relations professor at the Norwegian University of Science and Technology.

The US foreign policy establishment is continuing to perceive Russia as a "severe problem" and believes that it "should be punished," the professor points out, adding that a number of European states, most notably, Poland, Ukraine, and Baltic States, share this stance, which is narrowing the room for any conciliatory process.

The West should take Russia's strategic concerns into account, highlights the political scientist: "So, President Putin – expectedly – needs to signal that there are indeed some red lines which, if crossed, will lead to consequences," Jakobsen says.

US, EU, and Russia Should Team Up to Work on Global Issues

Instead of copycatting Washington's moves, Europe should act as an impartial arbiter between Russia and the West, deems Paolo Raffone.

"I think that this could be the only opportunity for a constructive dialogue with the hope that European leaders will overcome their subdued attitude towards the United States," he says.

Nicolai Petro, Professor of Political Science at the University of Rhode Island (USA), and currently a Visiting Fellow at the Institute of Advanced Studies at the University of Bologna (Italy), anticipates no changes in either Russia's independent course, or in the West's efforts to restrain it.

"The fact that sanctions have become the sole instrument of Western 'dialogue' has meant that Russia can very effectively anticipate all Western efforts to contain it, and prepare accordingly", Petro explains.

While Eastern European states are dancing to the Biden administration's tune, the countries of Central-Western Europe are likely to maintain a positive relationship with Moscow despite the US pressure, argues Tiberio Graziani.

"It is in the interest of Europe, in particular France, Germany, and Italy, to maintain good relations with Moscow," he suggests.

Still, it is hard to say whether Germany and France will weigh in anytime soon, given that they are going to hold national elections, remarks Dimitris Rapidis, political analyst and founder of Bridging Europe, a policy-making organisation on EU Affairs. "Relations with Russia will be an item in the domestic agenda of both countries as the electoral campaign will heat up," he forecasts.

Meanwhile, the need to solve common global issues, such as the coronavirus pandemic, economic downturn, nuclear non-proliferation, and climate change, which require collective action of all the world's players, could potentially reduce current tensions, according to the observers.

"The US, Europe, and Russia are well placed to work on these issues," says Raffone. "In this respect, a positive response from Russia to Biden in the [climate change] meeting that has been proposed could be of some help, we have to see. It is very difficult. The rope is tight, but there is still a space."