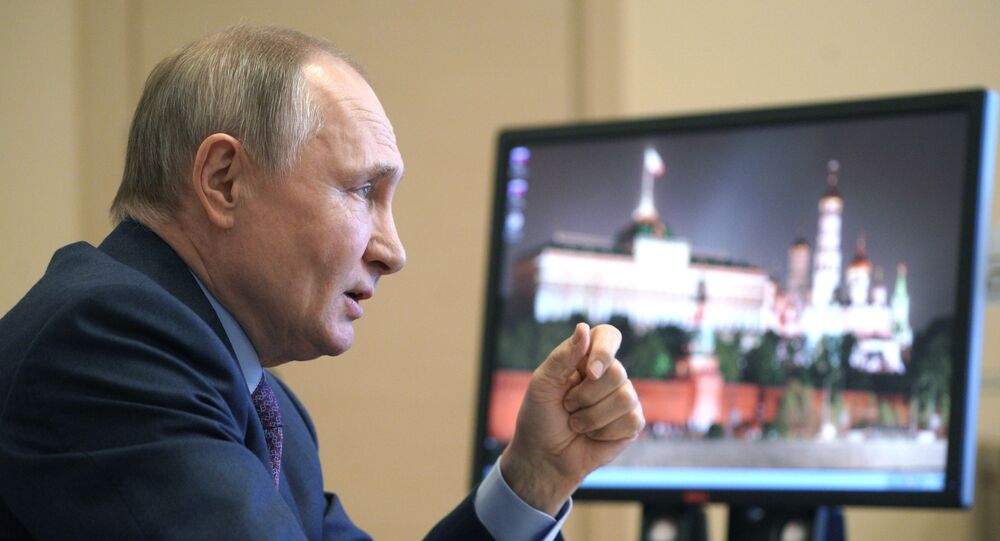 Putin Plans to Get Vaccinated Against Coronavirus Tuesday

Russian researchers have created three vaccines against COVID-19, the infectious diseased caused by SARS-CoV-2, a potentially deadly strain of coronavirus which has been wreaking havoc on global health care systems and economies for over a year now.

Russian President Vladimir Putin has announced that he plans to get vaccinated against coronavirus on Tuesday.

"Vaccination is a voluntary choice made by each person - his or her personal decision. Incidentally, I plan to get vaccinated tomorrow," Putin said, speaking at a meeting dedicated to increasing Russia's vaccine production capabilities on Monday.

Kremlin spokesman Dmitry Peskov confirmed to reporters that Putin would be vaccinated using one of three Russian vaccines, but did not specify which one the president has chosen. He added that the president does not plan to take any time off after getting vaxxed.

In August of 2020, Russia became the first country in the world to register a vaccine against the coronavirus, with the preparation, known as Sputnik V, created by the Moscow-based Gamaleya Research Institute of Epidemiology and Microbiology. Sputnik V is an adenovirus viral vector vaccine and uses modified human adenoviruses (the same kind of virus known for causing common colds) to provoke an immune system response and teach the body's defences to recognise and fight against the coronavirus. Sputnik V has been approved for use in over 50 countries around the world, including Russia itself, China, India, Iran, much of the Middle East, most of Latin America, Italy, Serbia, Hungary, and South Korea.

The second vaccine is known as EpiVacCorona, and was created by the VECTOR virology and biotechnology research centre outside Novosibirsk. This vaccine provokes an immune system response against the virus and provides immunity by using chemically synthesised peptide antigens combined with SARS-Cov-2's spike protein. The preparation does not contain the live virus itself while it has been approved for use in Russia and Turkmenistan.

The third Russian preparation is known as CoviVac, and was created by the Moscow-based Chumakov Scientific Centre for Research and Development of Immune-and-Biological Products. This vaccine is a traditional inactivated virus-based preparation, and teaches the immune system to battle the virus by using dead virus fragments. Inactivated vaccines have been used been used successfully for over a century to safely and effectively wipe out polio, Hepatitis A, diphtheria, tetanus, and other diseases which once threatened humanity. The Chumakov Scientific Centre's work is credited with completely ending polio in the USSR, other socialist countries, much of the Third World, and Japan in the 1960s. CoviVac received approval for use in Russia in February.

On Friday, German Chancellor Angela Merkel said that Sputnik V should be used in the European Union once it's registered, and that Berlin may order the vaccine if the European Commission decides not to do so. Merkel added that she personally would be inoculated using AstraZeneca's vaccine after "waiting her turn." A handful of world leaders have already been vaccinated against the coronavirus, among them Indian Prime Minister Narendra Modi, Israeli Prime Minister Benjamin Netanyahu, US President Joe Biden and Saudi Crown Prince Mohammed bin Salman.