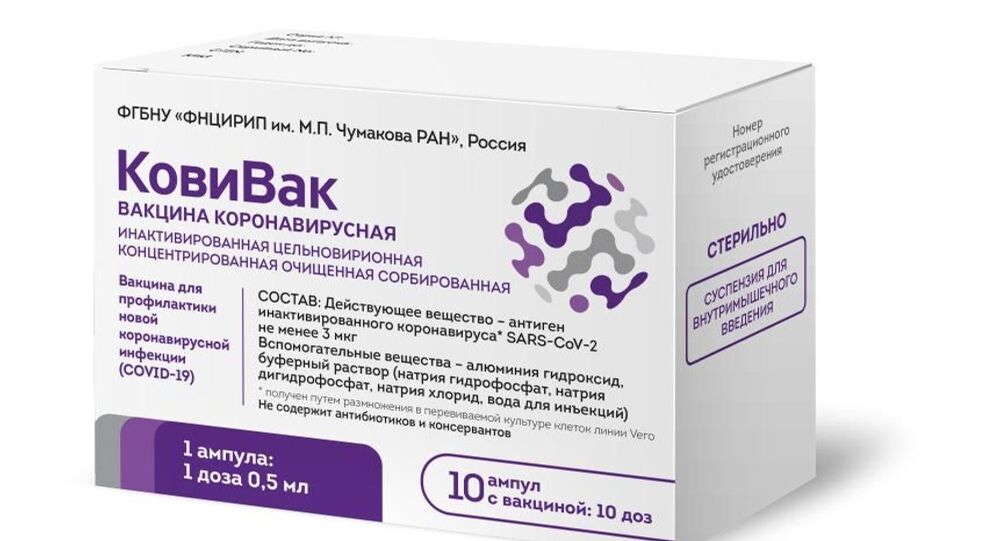 Last August, Russia's Sputnik V became the first registered vaccine against COVID-19 in the world, while approval of EpiVacCorona followed in October.

A new vaccine against the novel coronavirus has been developed by the Chumakov Federal Scientific Centre of the Russian Academy of Sciences, Prime Minister Mikhail Mishustin stated on Saturday.

"I want to start with great news, the third vaccine, CoviVac, has been registered. It was developed by the Chumakov Centre. By mid-March, the first 120,000 doses will be available for the domestic market", Mishustin said.

He said a mass vaccination campaign with the new medication will be launched in spring.

© AP Photo / Zoltan Balogh
A vial containing Russian vaccine Sputnik V is shown by a nurse at the South Pest Central Hospital in Budapest, Hungary, Friday, Feb. 12, 2021, as the vaccination with Sputnik V against the new coronavirus begins in the country.

According to the head of the Russian government, the country has already opened 4,000 vaccination stations and produced at least 10 million doses of the Sputnik V vaccine and 80,000 doses of EpiVacCorona.

In the meantime, Health Minister Mikhail Murashko has confirmed the high efficiency of the new medication.

"During the clinical studies on volunteers, the [CoviVac] vaccine demonstrated high levels of safety and efficiency. The large-scale trials will continue during the post-registration stage", he said.

Phase 3 clinical trials are scheduled for March and will involve 3,000 participants, Russia's Ministry of Science said. According to the authorities, the CoviVac vaccine is currently recommended for people aged between 18 and 60, with an expansion possible following phase 2 trials.

According to Health Ministry data, the medication does not need deep freezing. It may be stored for 6 months at temperatures ranging from 2-8°C (around 35.6-46.5°F).

The new vaccine is not recommended for pregnant and lactating women - as well as for people who had complications after receiving other vaccines, people exhibiting symptoms of acute respiratory viral infections, and those suffering from exacerbations of chronic diseases, according to its administration manual.