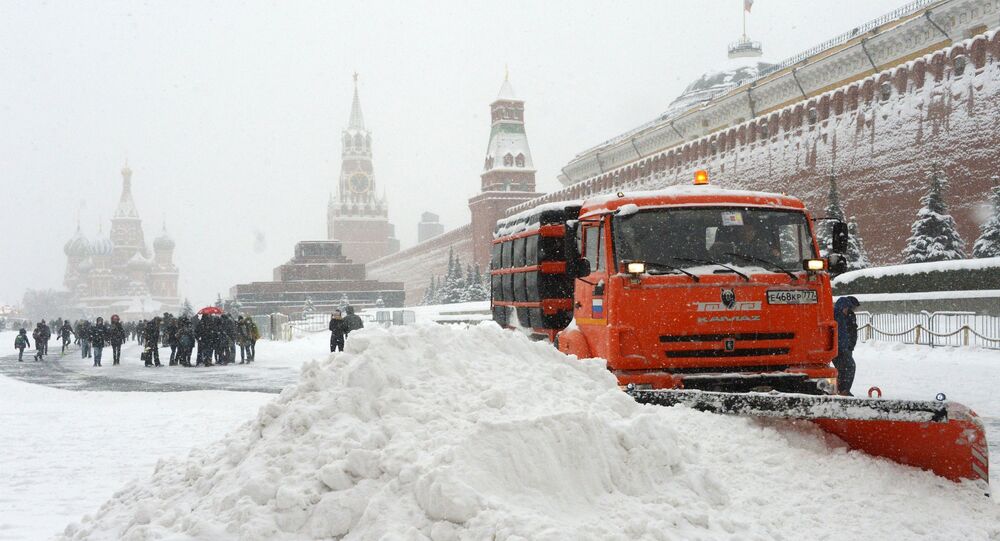 The Russian capital has seen a snowier-than-usual winter this year, getting over 100 cm of powder (nearly 70 percent of the annual average), since 1 December.

Moscow is bracing for a "snow apocalypse" as meteorologists predict 36 straight hours of non-stop precipitation and wind speeds of up to 20 metres per second.

“From 00:00 Friday to 12:00 Saturday, in connection with the approach of the Balkan Cyclone Volker, which is attacking central Russia, snowfall of very high intensity will continue over a 36 hour period. This is a real blizzard – a snow Armageddon, a snow apocalypse,” says Yevgeny Tishkovets, a leading specialist at the Phobos Weather Centre.

“In these conditions, visibility will drop to 500 meters or less. In some instances, you won’t be able to see anything even at arm’s length. This is something close to a Black Blizzard. I advise people not to tempt fate, as there will be a collapse of road and air transport. Motorists should leave their vehicles at home. It’s better to travel by metro or stay home,” the meteorologist says.

© Sputnik / Pavel Bednyakov
Fleet of snowplows on patrol on Tverskaya Street in Moscow.

Temperatures are expected to remain relatively seasonal, from -9 to -14 degrees Celsius, however, Tishkovets says the wind chill effect will make it seem like it’s about 10 degrees colder.

Moscow’s utilities services have announced their readiness to tackle the snowstorm, with an army of about 60,000 workers enlisted to tackle manual snow removal, and thousands more operating machinery, trucks, tractors, and winterised street sweepers. Entrances to metro stations, public transport stops, and medical institutions have been prioritised for clearing.

© Sputnik / Evgeniy Odinokov
Utilities workers clear a roof of a residential building in Moscow. Roofs are cleared regularly in winter to prevent a dangerous buildup of snow.

The Russian capital’s annual norm for snowfall is about 152 cm, but it's seen higher than usual levels in recent years. This season, the first snow came to Moscow in late November.

Meteorologists say that the daily record of 7.3 cm of snowfall set in 1973 may be broken during the Friday-Saturday storm.

Compared with some other European cities, which declare emergencies after experiencing a couple centimetres of snowfall, Moscow is well-equipped to handle the white stuff, with information on precipitation transmitted by 39 automated road-based stations and 45 weather sensors in the capital, all of them located near the main road arteries. Moreover, housing, public institutions, businesses, and other buildings are well-insulated, and Russian scientists and utilities services have spent decades perfecting technologies to keep water, electrical, gas, and communications systems operational even in the worst conditions.