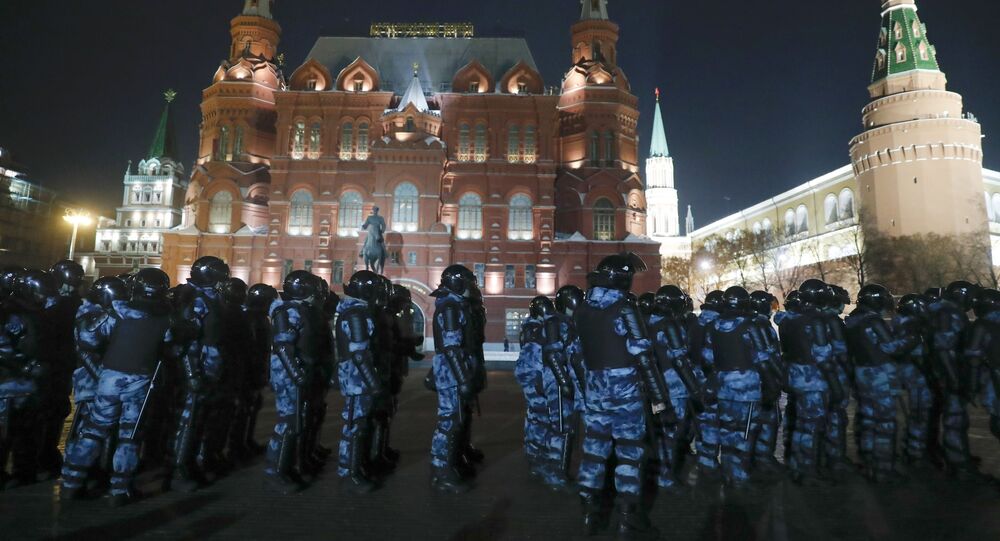 "In Moscow, all places where unauthorized events took place have been cleaned up," the source said.

He said there remained patrols on duty on the Russian capital's streets.

"Several patrols remain on duty in Moscow after unauthorized events," the source said.

A court in Moscow on February 2 sentenced Navalny to 3.5 years behind bars in a financial misdemeanor case. The ruling came to replace Navalny's suspended sentence in the same case due to his breach of conditions set in the court's original verdict. Navalny's legal team has 10 days to appeal the ruling.

After the sentencing of Navalny, his supporters began to call for an unauthorized rally in the center of Moscow, including on Dmitrovsky Lane, Manezhnaya Square and near the Bolshoi Theater. They began to gather for unauthorized protests, including going out onto the roadway, interfering with the movement of vehicles and pedestrians.

© AP Photo / Pavel Golovkin
Police detain a man, with the the State Duma, the Lower House of the Russian Parliament, in the background in Moscow, Russia, Tuesday, Feb. 2, 2021.

In 2014, Alexey Navalny and his brother Oleg were indicted on charges of embezzlement in dealings with the Russian subsidiary of French cosmetics company Yves Rocher. Alexey got a 3.5-year suspended sentence, with one of the conditions being that he check in with the police in person at least twice a month.

In 2019, the European Court of Human Rights (ECHR) ruled that Navalny's house arrest during the Yves Rocher case trial breached several provisions of the European Convention on Human Rights but declined to recognize the case as politically motivated.

Unauthorised Rallies in Support of Navalny Held in Moscow and St. Petersburg