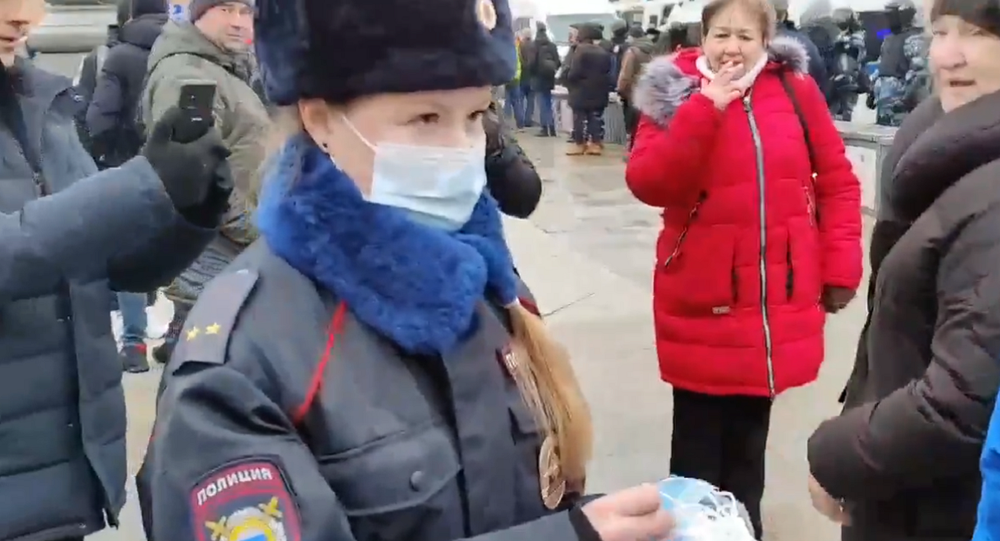 Illegal rallies are being held in several Russian cities in support of the blogger Alexei Navalny, who was detained for violating the terms of his probation last week. Russian authorities have warned that such rallies disrupt public order, and reminded that the current epidemiological situation does not allow for mass gatherings.

Police officers are handing out face masks to participants of the unauthorised rally at Pushkin Square in central Moscow.

According to a Sputnik correspondent, the law enforcement forces are using loudspeakers to remind the public that the gathering is unsanctioned and they need to maintain social distance and wear masks and gloves to prevent the spread of coronavirus.

Social media users shared a video in which a female police officer is seen distributing the masks to a group of adolescents. At some point in the clip, the group is confronted by an emotional elderly woman, apparently supporting the protest's cause, urging them to refuse the offer, despite the ongoing regulations requiring people to wear face protection in public places and during mass gatherings. Nevertheless, the teenagers accept the masks and walk away.

​Remarkably youthful protests have been held across several Russian cities despite multiple warnings by the Internal Ministry and General Prosecutor's office of responsibility for planning and participating in the rallies.

In particular, the prosecution demanded that social media sources be prevented from urging underage people to participate in such gatherings.

Russian communications watchdog Roskomnadzor has said that it deleted 89% of such calls, mostly on TikTok and Vkontakte - a popular Russian social network.

The rallies come in response to the jailing of Russian blogger Alexei Navalny, who was arrested for violating the terms of his probation in a money laundering case.

Navalny returned to Russia last week after spending months in Germany, where he was treated for alleged Novichok poisoning. He had previously been treated in Russia after his health suddenly deteriorated on board of a domestic flight in August.