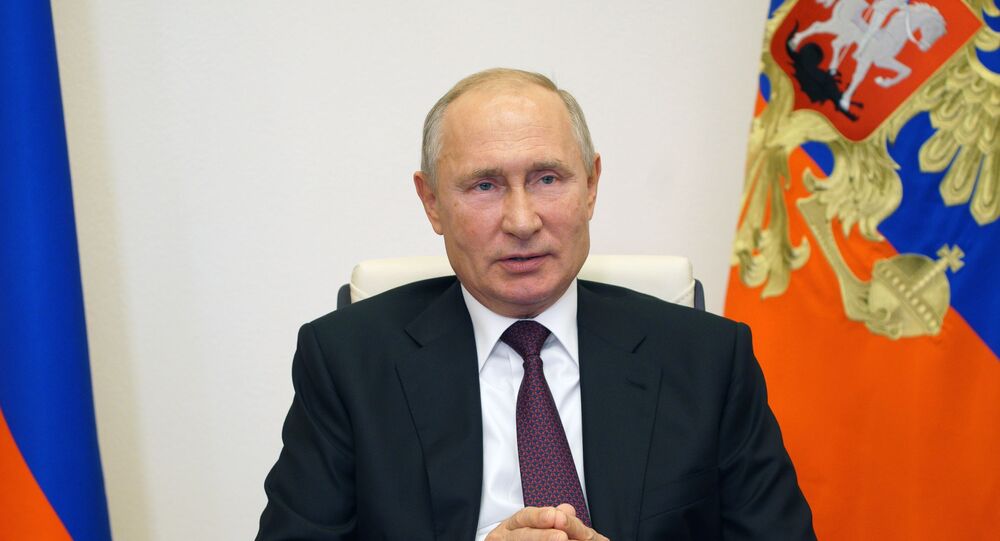 MOSCOW (Sputnik) - The attempts to revise the role of Russian special services in the defeat of Nazism during the WWII must be confronted, Russian President Vladimir Putin said on Saturday.

"Our common task is to confront any attempts to revise history, including silencing or distorting the role of our special services in the defeat of Nazism and, more generally, in ensuring the national security and national interests of our country", Putin said.

Aside from the SVR, the Russian leader addressed the statement to all of Russia's other special service agencies, saying that "we are all rightfully proud of the glorious pages of history of our services."

"In the year marking the 75th anniversary of the great victory, we bow our heads to the memory of all those who led fighters to the war — in the units formed of security personnel, in the very hotbed of the frontline, defending Moscow, Leningrad, Stalingrad, fighting near Kursk and other critically important locations of the Great Patriotic War [1941-1945], creating partisan units and performing responsible tasks in the rear, eliminated spies, traitors and saboteurs", Putin said.

Most myths about the role of Soviet special services during World War 2 pertain to the military counterintelligence operations of the so-called SMERSH agency, experts say. SMERSH was a joint directorate of independent Soviet intelligence services, created in 1943 and disbanded in 1946.

A common myth holds that SMERSH personnel performed merely punitive functions, while Red Army soldiers fought in the front line. In actuality, military counterintelligence officers not only performed their direct professional duties but were also involved in the military action and even assumed the command of units which had lost their commanders to the war when necessary. SMERSH personnel fought alongside Red Army soldiers, and the death toll in their ranks was proportionally the same as in the army. There were many instances of military counterintelligence officers rescuing army units from blockade and forming special purpose partisan units.

SMERSH's key achievement during World War 2 was that not a single operation of the Red Army had been undermined because of hostile intelligence services and not a single plan of the Soviet command had been made known to the enemy, historians have pointed out. Moreover, despite Adolf Hitler's pursuit, not a single anti-Soviet demonstration occurred in Red Army ranks and in the rear. Experts believe it was thanks to SMERSH that the Soviet Union acquired an efficiently functioning mechanism of countering the hostile intelligence, created by Nazi Germany and excelled in other countries for years.

Russian intelligence agencies should provide maximum protection at the state border due to the risks of simmering conflicts in neighbouring regions, Russian President Vladimir Putin said on Sunday.

"We need to strive for more effective protection of the state border, especially given the risks of smoldering regional conflicts near our borders", Putin said.

Putin made the statements during the visit to the headquarters of Russia's Foreign Intelligence Service (SVR) to mark the 100th anniversary of its establishment.