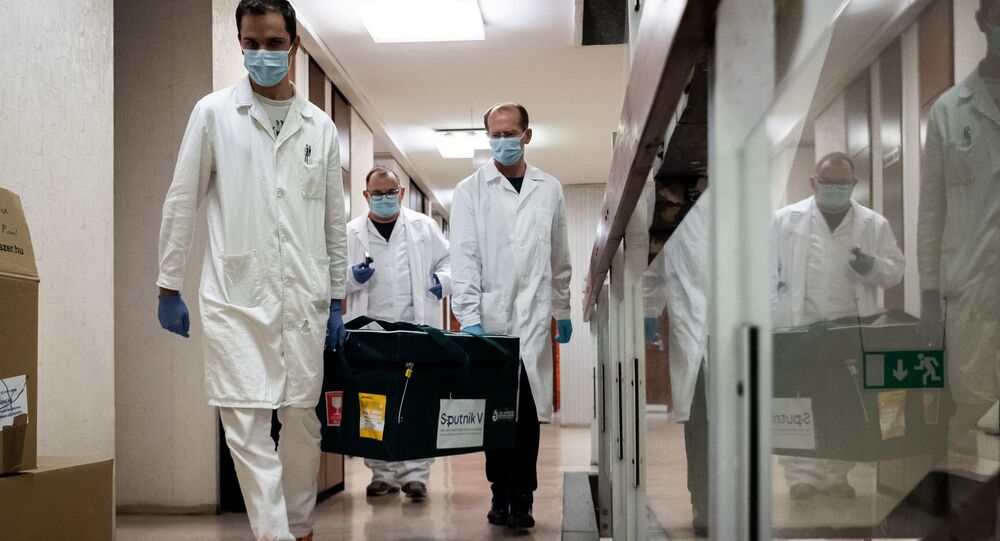 Findings from Russia's leading biomedical researchers revealed that the country's COVID-19 vaccine is capable of "astonishing" rates of protection against the ongoing pandemic, it was announced at a press briefing.

Leading researchers from the Gamaleya National Research Centre for Epidemiology and Microbiology and executives from the Russian Direct Investment Fund (RDIF) revealed progress made in Phase III trials for their Sputnik V vaccine on Monday.

Sputnik takes a closer look at data from the researcher's finds.

According to Gintsburg, the vaccine's third post-registration phase trial had been a joint effort with partners such as the Ministry of the Russian Federation and Government of Moscow's Department of Health.

More than 26,000 patients had received the first component of the vaccine and 22,000 had received both jabs, he said.

© Sputnik / Georgy Zimarev
Russia's Sputnik V Vaccine Against COVID More Than 90% Effective After 3 Control Points
The vaccine was also effective in grave and moderate cases of COVID-19 as well as mild infections, he added.

"Today, we are celebrating a landmark event that proved the highest efficacy," Gintsburg said, adding "100 percent protection from grave cases makes this vaccine quite relevant."

RDIF's chief executive Dmitriev praised the vaccine, stating it was a "huge achievement" of the Institute's work and one of the highest efficacy rates globally, with leading competitors achieving much lower rates.

The vaccine also reached 100 percent efficacy against grave cases in the trial, with no ill effects reported from the jabs, he said, adding a further report will be submitted to expedite registration of the Sputnik V vaccine in other countries.

Dmitriev also thanked the Ministry of Health of the Russian Federation for its supervision of trials, hailing it as a "landmark event".

"It is a stunning result with more than 90 percent efficacy [and] more than 90 percent of people don't contract COVID-19. We have been able to avoid grave or severe cases, which is one of the key parameters for benchmarking. This is definitely a stunning, astonishing result showing that Sputnik V's the vaccine that will stop the pandemic in Russia and other countries," he concluded.

Dmitriev also praised the vaccine as being the most efficient "in terms of safety, cost, logistics and efficacy" in the world.

He concluded that roughly 320,000 doses of the product had been shipped and released to end consumers outside clinical trials, with a second batch being released as early as tomorrow.

Logunov added no technical data on total vaccinations outside of the trial had been released but the trial was a "watershed" moment after establishing its efficacy.

Russia expects to ship vaccines to partners in Belarus, the United Arab Emirates and others in the Middle East as well as Latin America, Logunov said, adding Moscow would also ramp up production capabilities in the country and partner nations.

The news comes after the Gamaleya Centre registered the Sputnik V vaccine in August, making it the world's first registered COVID-19 vaccine.

British medical journal The Lancet published research on Phase I and Phase II clinical trials of the vaccine, revealing no adverse effects in patients and triggering an effective immune response. More than 50 countries have requested roughly 2.4 billion doses across India, Brazil, China, Argentina, South Korea and numerous others.

AstraZeneca to Cooperate With Sputnik V Developer on Vaccine Combinations