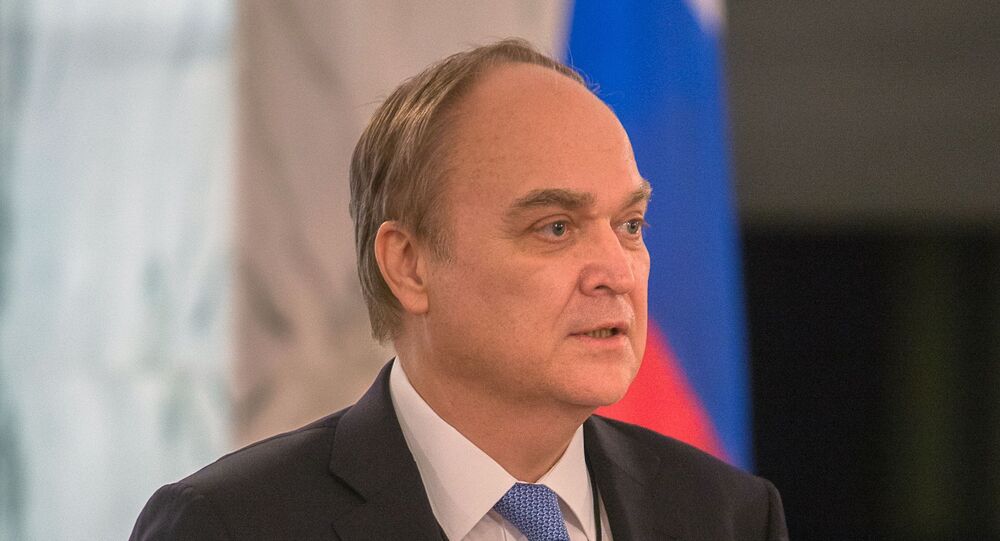 Russia Ready to Join Efforts With US Against COVID-19, Share Vaccine - Ambassador

WASHINGTON (Sputnik) - Russia is open for cooperation with the United States in fighting the coronavirus pandemic and will be ready to share a vaccine against the disease, Russian Ambassador Anatoly Antonov said at an event hosted by a Washington think tank.

"It seems to me that we shouldn’t try to launch competition on this issue. We should unite our efforts. If we have a vaccine that could protect Americans, we are ready to share with you," Antonov said at the Brookings Institution online event on Wednesday.

Russia emerged as a leader in vaccine development with two of its products, Sputnik V, developed by Moscow’s Gamaleya Institute, and EpiVacCorona, developed by Siberia's research center Vector, are completing Phase 3 clinical trials. On Wednesday, Russian President Vladimir Putin instructed the government to start mass vaccination by the end of the next week.

Antonov reaffirmed Russia’s aspirations to have better relations with the US.

"We are still in a good mood. We are still in favor to develop our relations," he said. "I would like to use all positive elements that we had before and we have now."

The ambassador named six areas where he believes closer ties are possible - strategic stability, non-proliferation, fight against terrorism and COVID-19, space and cybersecurity. Antonov added that he is "dreaming" to see Russia’s Defense and Foreign ministers come to Washington to unblock 2+2 channel of communications with their American colleagues.

Russia is continuing talking with US negotiators to extend the New Strategic Arms Reduction Treaty (New START) despite the fact the United States is in a post-election period, and still sees an opportunity to reach an agreement before the treaty expires, Antonov said.

"We have time. We can get it very quickly," Antonov stated. "We are still in a dialogue. We hope we will continue it for a foreseeable future."

Antonov noted that he is in "a close contact" with Marshall Billingslea, the US Special Envoy for Arms Control and a top negotiator on the New START.

The ambassador also added that Russia would welcome the possible United States return to the nuclear agreement with Iran after the Trump administration withdrew from the accord.

“It goes without saying that we would welcome the potential decision of the United States to return back to this deal,” Antonov said during a Brookings Institution online event on Wednesday.

His comments come as presumed President-elect Joe Biden said before the November 3 election that the United States would rejoin the Iran nuclear agreement as a starting point for follow-on negotiations if Iran returns to strict compliance.

Antonov also noted that it remains unclear whether Moscow and Washington will succeed in improving the arms control situation, despite Russian efforts to extend the last remaining arms control pact between the two countries.

“Despite Russia’s recent new initiatives, today there is no certainty that we will succeed in improving the situation,” the ambassador said.

Russia will recognize the US President after all legal procedures under US laws are finalized, Russian ambassador said.

"We need to wait some legal procedures in your country when all official results will be announced. After this event everything will be done according protocol," Antonov explained when asked whether Russia would recognize Joe Biden as new US president.

Antonov emphasized that Russia considers the election of the president of the United States to the country’s internal matter.

"We consider that it is the American people that decide who will run this country. We will recognize any choice that your people make," Russian ambassador added.

Russia Asks US Not to Relocate Yaroshenko Given Health Concerns, Ambassador Antonov Says