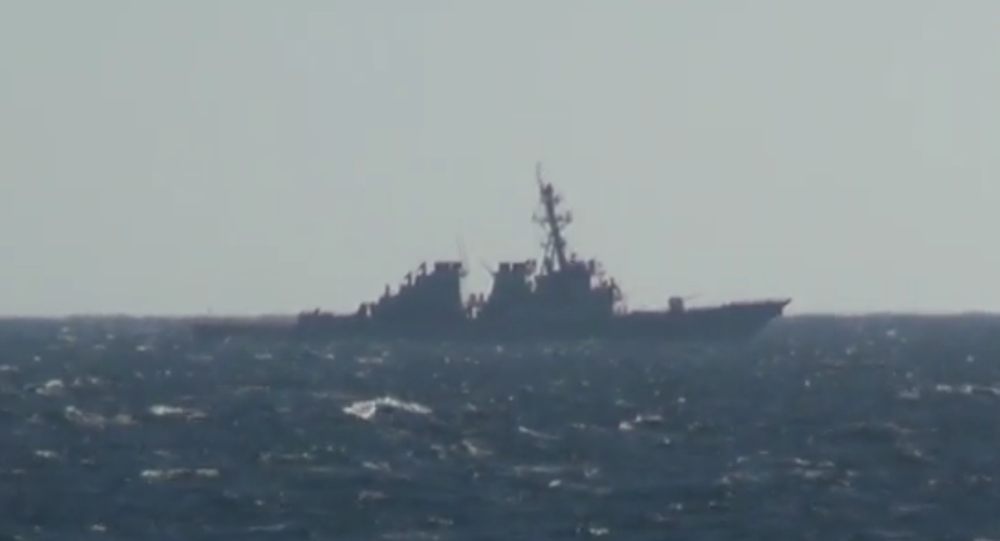 The provocative maneuver is just the latest attempt by Washington to cast Russia as a rogue state that wantonly violates international law, and it comes on the heels of a similar action in the Taiwan Strait on Friday.

The US Navy announced on Tuesday that one of its warships, the USS John S. McCain, had performed a freedom of navigation operation (FONOP) just miles from Russia’s eastern port city of Vladivostok, where the Russian Pacific Fleet is headquartered.

According to the US Seventh Fleet, the Arleigh Burke-class destroyer was upholding “the rights, freedoms, and lawful uses of the sea recognized in international law by challenging Russia's excessive maritime claims.”

The news release notes that in 1984, the Soviet Council of Ministers declared a system of straight baselines for parts of its eastern coast, including those that face the Pacific Ocean, Bering Sea, Sea of Okhotsk and, like Peter the Great Gulf, the Sea of Japan. Some of them Washington has decided to dispute.

“This 106-nautical mile (nm) closing line is inconsistent with the rules of international law as reflected in the Law of the Sea Convention to enclose the waters of a bay,” the US Seventh Fleet news release stated.

“By drawing this closing line, the USSR attempted to claim more internal waters - and territorial sea farther from shore - than it is entitled to claim under international law. Russia has continued the USSR claim,” the Navy continued. “By conducting this operation, the United States demonstrated that these waters are not Russia's territorial sea and that the United States does not acquiesce in Russia's claim that Peter the Great is a ‘historic bay’ under international law.”

Russia has claimed sovereignty over Peter the Great Gulf since 1860, when it was awarded the surrounding territory by China as part of the Treaty of Beijing, renaming it after the founder of the Russian Empire. No other country has ever laid claim to the gulf and Moscow readily and easily exercises sovereignty over it. As a result and under international custom, Peter the Great Gulf falls under the category of a historic body of water, not international waters or a navigable territorial sea.

The Russian Ministry of Defense has released footage of the incident via Krasnaya Zvezda, the military’s news outlet. The film is shot from the deck of the Udaloy-class frigate Admiral Vinogradov, which responded to the USS McCain’s incursion.

The USS John S. McCain conducted a freedom of navigation operation in the vicinity of Peter the Great Bay in the Sea of Japan today. Russia claimed that it violated Russia's maritime border by 2km. It was met by the Pacific Fleet's Admiral Vinogradov.https://t.co/TkIsL5Qs9Z pic.twitter.com/2kvKjiAOfJ

​According to the Ministry of Defense, the McCain passed two kilometers beyond the line of Russia’s claimed maritime borders.

Another US destroyer, the USS Barry, performed its own FONOP through the Taiwan Strait on November 20, according to the US Pacific Fleet. The maneuver is just one of several this year intended to flout Chinese claims of sovereignty over the autonomous island of Taiwan, which enjoys informal US support.

It’s unclear what great material gain Washington expects to make by rejecting this claim and demonstrating it can sail a US warship within a few dozen miles of a major Russian city. However, the news release notes the US sees itself as upholding international law: in recent years Washington has spared no effort to cast Russia and several other nations as “revisionist” powers who seek to upend the post-Cold War order crafted by the US when it was the world’s sole superpower.

The Pentagon’s Indo-Pacific Strategy Report, published in June of 2019, described Russia as "a Revitalized Malign Actor," which it says "seeks to advance Moscow's strategic interests while undermining US leadership and the rules-based international order."

A 1987 document by the US State Department on the Soviet border changes notes that the US has disputed Moscow’s claim that Peter the Great Gulf is a “historical body of water” since 1957.

US State Department
A cropped image from a 1987 US State Department document showing the Soviet Union's straight baselines recently implemented along its eastern coast. Peter the Great Gulf (Zaliv Petra Velikogo) is at bottom left.

According to the 1982 United Nations Convention on the Law of Sea, nations are allowed to employ straight baselines “in localities where the coastline is deeply indented or cut into,” among several other situations.

The treaty further notes that “the drawing of straight baselines must not depart to any appreciable extent from the general direction of the coast, and the sea areas lying within the lines must be sufficiently closely linked to the land domain to be subject to the regime of internal waters.”

According to the State Department, the line across Peter the Great Bay does not meet any of the UN’s requirements, but the department’s justifications for that position are subjective and facile, such as that the coastline is not indented enough.

Biden Likely to Be 'More Hawkish' on Foreign Policy Toward Russia, US Senate Ex-Candidate Says

Biden Says Will Strengthen US Alliances in Asia-Pacific Region

Tags:
1982 UN Convention on the Law of the Sea (UCLOS), Freedom of Navigation Operations (FONOPS), US Navy, Vladivostok
Community standardsDiscussion