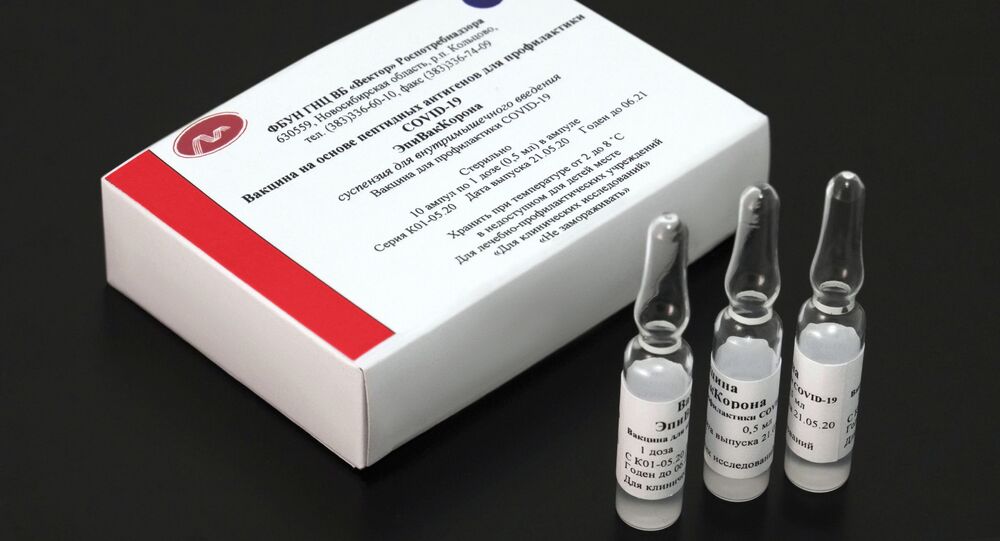 MOSCOW (Sputnik) - Russia's research centre Vector is working on a combined vaccine that would protect both against flu and COVID-19, Director Rinat Maksyutov said on Wednesday.

"Our centre is currently working on a combined vaccine against the coronavirus and seasonal flu," Maksyutov said at the Valdai Discussion Club forum.

He added that Russia's coronavirus vaccine, EpiVacCorona, developed by the Vector research centre, is absolutely safe both for elderly people and those suffering from allergies.

"The vaccine is absolutely safe both for healthy volunteers, people suffering from chronic conditions and allergies, and elderly people. We are even looking into the possibility to conduct clinical trials on children, aged from 14-17, the composition of the vaccine will not be changed", Maksyutov said.

Russia registered the world's first coronavirus vaccine, Sputnik V, on 11 August. It was developed by the Gamaleya Research Institute and the Russian Direct Investment Fund (RDIF). The fund's CEO, Kirill Dmitriev, told the audience of the Valdai Discussion Club forum how the development of Sputnik V started.

"The active investment started only in January of this year, when the coronavirus just emerged. Unlike many other funds that decided not to invest in this area, because they did not understand that this would be such a 'serious' epidemic, many investors thought it would be over soon — since we are investors learning to foresee the future, we realized immediately this would be something serious and long-lasting", the RDIF CEO said.

Russian vaccine has been attacked in an attempt to discredit it as part of the geopolitical vaccine battle, CEO of the Russian Direct Investment Fund Kirill Dmitriev said.

"We do indeed see a powerful attack against the Russian vaccine, which began even before it was registered, as soon as it was reported that the vaccine was being developed", Dmitriev said at Valdai discussion club.

"I think the participants here [at the session] are interested in this vaccine battle as an example of a geopolitical confrontation," RDIF CEO said.

According to Dmitriev, there are attacks on the vaccine and attempts to discredit it. RDIF CEO noted that the pharmaceutical industry was not very welcoming toward the new players.