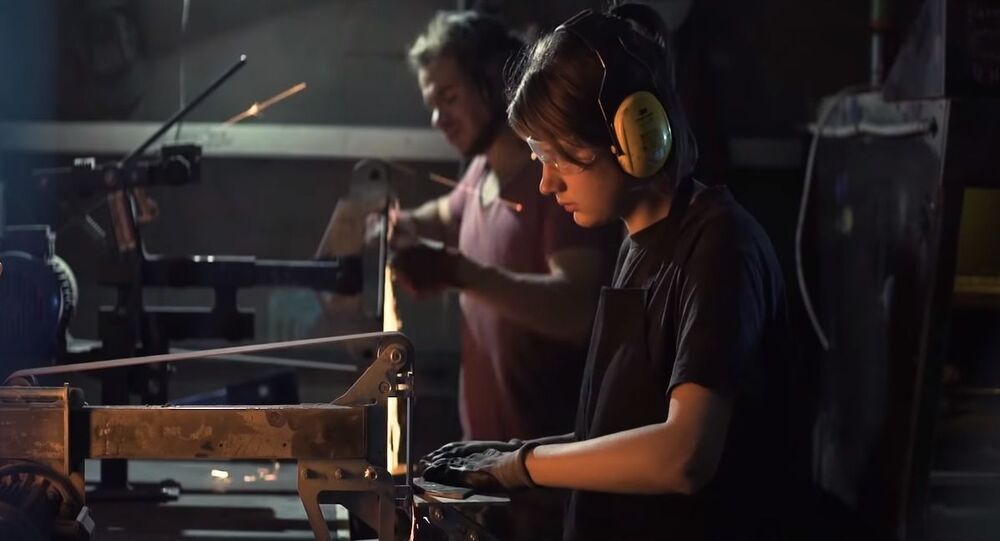 'It’s Not About Gender, It’s About Personal Traits': Russian Woman on Her Success in Knife-Making

When one looks at how 23-year-old Anna German enthusiastically cuts carrots and beets, one thinks that this gentle girl is preparing a salad for her significant other or parents. Actually, Anna is doing what any reputable knife maker does after a long day at work – she’s testing a knife that was recently made.

In recent decades, the boundaries between male and female professions have blurred and both women and men now take on jobs and activities that were previously dominated by one gender. However, now and then people debate whether this or that job is suitable for a man or woman. This is what happened to Anna German, a 23-year-old Muscovite, when a video in which she makes knives went viral on Russian social media.

"It takes a lot of time to make a knife, one person makes approximately one knife a day", Anna said in an interview with Sputnik, adding that knife makers buy steel in the form of bars and then smith them into long, wide plates, which then serve as material for future knives.

Anna recently joined the Russian brand Vasverblades and has already made 200 knives. The Vasverblades team consists of 10 people. Working 10 hours a day, they make 50 knives of low and medium complexity every week.

In Intuition We Trust

According to Anna, who is an arts major, ideas about future knives come spontaneously.

"You take materials that you have at hand and then you try to listen to your intuition. The process of making knives is no different from any other creative process. Very often you come up with some unique concept in your head and then you attempt to bring this concept to life. It’s quite an interesting process, given the fact that there are between 30 and 40 types of knives", Anna told Sputnik.

Speaking of unique concepts, here is a Vasverblades knife with a handle made of buckwheat.

The Vasverblade team has for a long time wanted to create a replica of the knife used by the Witcher, a character in a famous fantasy saga that was recently made into a series by Netflix. Anna explained that 15 attempts have been made, but the team still can’t find a compromise.

"We’ve been faced with a dilemma: on one hand, this knife should be beautiful and spectacular, but on the other hand, witchers have simple and practical hunting knives. And so we are trying to combine these two factors", Anna told Sputnik.

She said the kitchen in her flat is filled to the gills with knives she has made. "Every time we are making a new model, someone from the team has to take a prototype home and test it".

The Most Laborious Process When Making a Knife

"I believe in gender equality, but I don’t believe that we are the same. When people say that an average woman can start hammering as easy as an average man, it’s nonsense. However, to achieve success one must work hard and be disciplined. It’s not about gender, it’s about personal traits. The profession of a knife maker is not an exception", Anna said.

According to her, the most laborious process when making a knife is sharpening it.

"It is difficult to sharpen a knife well without spending a lot of time. I’m still struggling with this", she explained.

In order to be a good knife maker, one has to master many professions, Anna said.

"A knife maker works as a lathe operator, a metal worker, a blacksmith, a leatherworker, a welder, and a joiner. Ideally one should be well versed in electrical engineering and have designer and computer modelling skills. Of course, I can’t boast of this arsenal of skills at the moment", she told Sputnik.

Made in Russia With Love

The price of a knife depends on the complexity of its production, Anna told Sputnik. "If by talking about designer things you mean custom-made or limited edition products, then such a knife made by Vasverblades can cost $800. Our most expensive knife costs $2,000. Foreign knife makers will charge you twice the amount for the same product".

Designer knives are now in demand, believes Anna, despite the fact that one can simply go to a shop around the corner and buy a knife that would fit every taste.

"People that purchase our knives are people that want to buy a product with some story, a product made with love. No wonder our knives are often bought as a gift. I think in the world of handcraft there is a trend for products to be 'made in Russia', but I can’t say for certain, because I don’t do sales", she explained.

Anna cannot say whether knife-making will become her lifetime project.

"First and foremost I’m a painter, although the English word 'artist' is a better way to describe my creative endeavours. I’m always looking for new ways to express my creativity - be it painting, photography, sculpting, or the smithing process. I go where my inspiration leads me. I was fascinated by the knife-making process, because although knives are utilitarian products, they look as if they were made to be beautiful. Whenever I see knives that are tacky or ugly, I invariably get disappointed. It’s funny, isn't it? Right now I love my job and I get paid very well. I probably found my place in the world, but, you know, never say never".