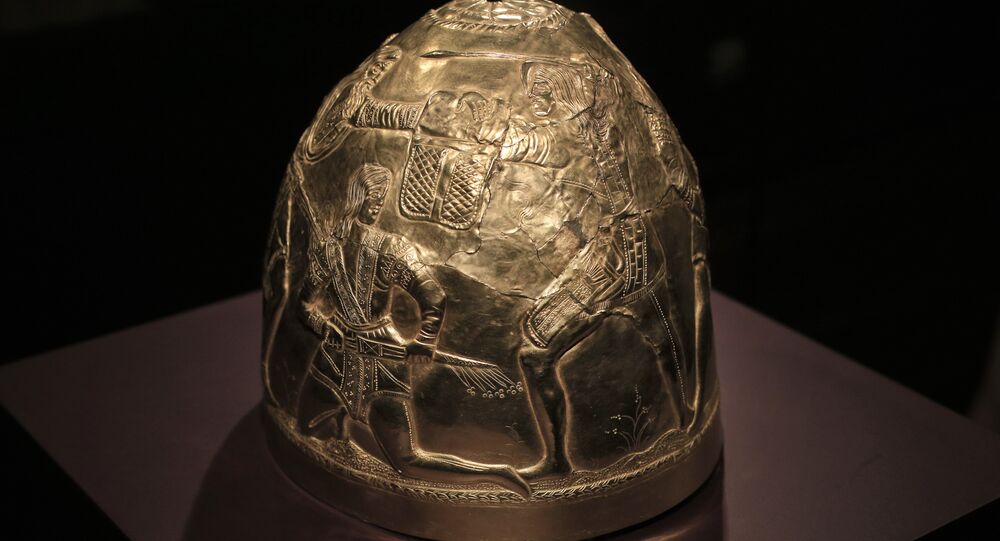 The loosely knit Scythian Empire, sprawling across most of eastern Ukraine, much of southern Russia east to Siberia, nearly all of Central Asia and part northern India between the 8th Century BC and the 2nd Century AD, has been an endless source of fascination for scholars seeking to learn more about the ancient and mysterious nomadic peoples.

Archeologists in Crimea have discovered several late Scythian crypts in the course of excavation work on a hill outside Simferopol, Crimean Federal University history professor Dr. Igor Khrapunov has said.

“We have uncovered a number of Late Scythian crypts, in which multiple burials took place – in some of them up to 100 burials,” Khrapunov said, speaking to local television on Wednesday.

According to the professor, in addition to the Scythians, the burial ground was also used by up to four other cultures over the course of about five centuries. “Right now we’re trying to figure out why the bearers of five different cultures chose this unremarkable hill over the course of half a [millennium],” he noted.

The crypts were discovered near the village of Opushki, about 15 km east of the city of Simferopol, in a dig site which stretches across approximately two hectares (about 5 acres) of land. An estimated 3,500 square meters of its roughly 20,000 has been explored over the past decade and a half, with archeologists observing an unprecedented layering of burials of various cultures stretching from the 1st century BC to the 4th century BC.

The Opushki dig site has given researchers and student volunteers at Crimean Federal University a wealth of new information about the former inhabitants of the peninsula, with archeologists finding utensils, bronze items, weapons and jewelry in addition to remains prepared for burial in various ways.

© AP Photo / Peter Dejong
Ruling on Scythian Gold From Crimea Postponed Because of Judge Recall, Amsterdam Court Says
Along with the Late Scythians, the findings have included artifacts belonging to the Sarmatians, a loose confederation of Iranian peoples which existed in classical antiquity and who were part of the wider Scytho-Siberian cultures eventually assimilated by the Proto-Slavic peoples of Eastern Europe. After them are crypts of the ancestors of the Medieval Alan peoples, another Iranian nomadic peoples of antiquity, and Ancient Germanic peoples who came to Crimea from the distant shores of the Baltic, leaving behind characteristic cremation sites.

But archeologists continue to scratch their heads as to why this specific hill was chosen, given its unremarkable nature, and the fact that no major ancient settlements have been found nearby to date, with the Scythian capital, Neapolis, located more than 20 km away.