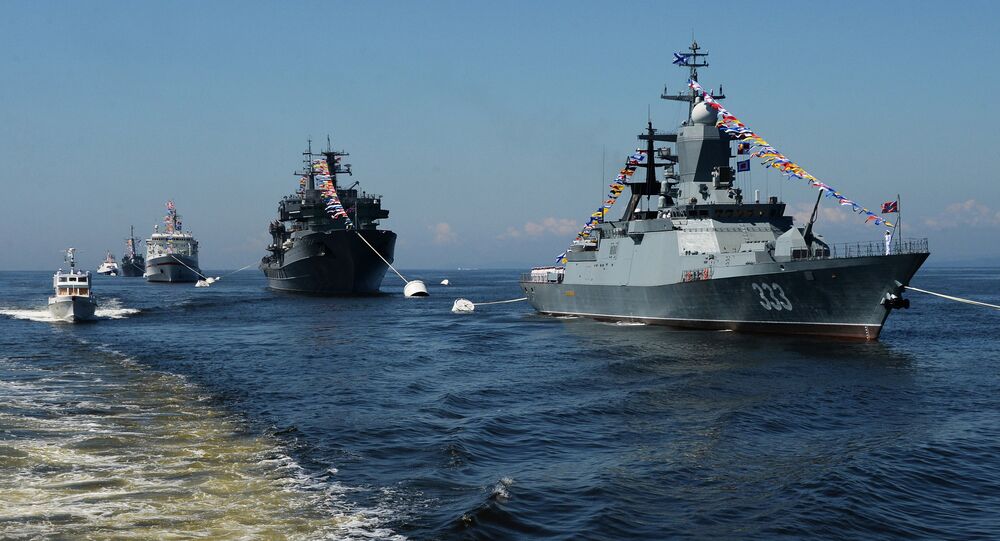 Viktor Chulkov, a spokesman for the local branch of the Hydrometeorological Centre of Russia, told Sputnik that Typhoon Haishen, raging across northeast Asia, is approaching Russia's Primorsky Territory faster than forecast, with the arrival expected on Monday. Local authorities have declared storm warning on 7-8 September over the typhoon.

"The forces of the Pacific Fleet, stationed in the Primorsky Territory, are ready for the passage of Typhoon Haishen … Preparations have been made to overcome strong wind and storm, including by setting additional mooring lines, deploying tugboats to keep warships at berths ... sealing of ships and securing the property in accordance with a storm mode", Voskresensky said.

© REUTERS / Yuri Maltsev
Russian amphibious vehicles drive in formation during a rehearsal for the Navy Day parade in the far eastern port of Vladivostok, Russia

Earlier in September, media reported that three tugboats of the Pacific Fleet had helped to avoid a collision of a detached floating dock of the Vostochnaya Verf shipyard with the warships of the Primorskaya flotilla.

The incident happened during the Typhoon Maysak in the area of Ulysses bay in Vladivostok when a strong wind blew off the dock and carried it to the warships, however, tugboats that arrived on time we're able to fix it.