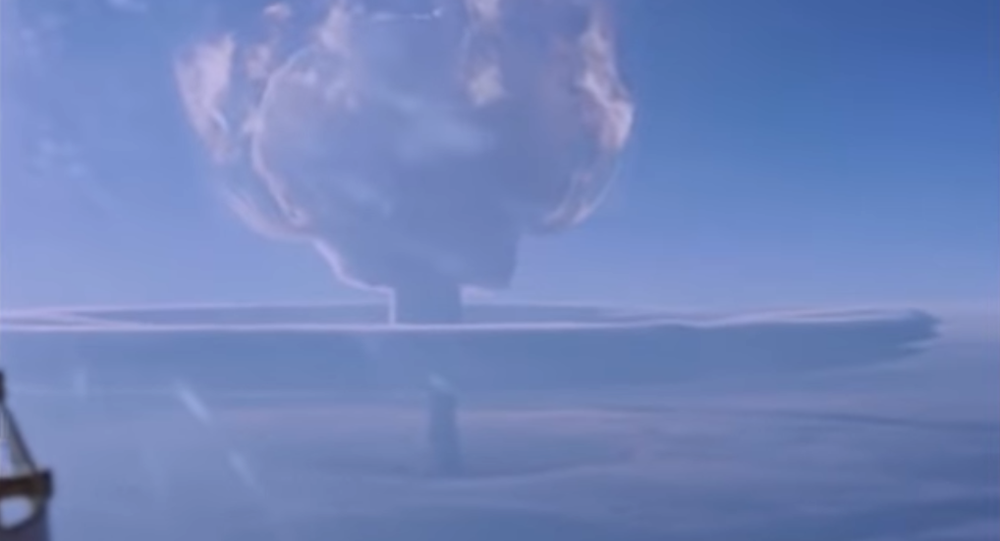 Just days before the 71st anniversary of the Soviet Union’s first atom bomb test in 1949, Russian state-owned nuclear corporation Rosatom has released rare and clear footage of the 1961 test detonation of Tsar Bomba, the most powerful weapon ever created by humans.

The 30-minute documentary published by Rosatom on August 20 chronicles the fateful day in October 1961 that the Soviet Union detonated a 50-megaton nuclear weapon on a remote Arctic island. Known simply as “Product 202,” the bomb’s colossal size and power earned it the moniker “Tsar Bomba” - the king of bombs.

To give an idea of this bomb’s power, consider that the United States’ most powerful bomb, the Castle Bravo test in 1952, was at most 22 megatons, and the bomb that destroyed the Japanese city of Hiroshima in 1945 was just 16 kilotons - in other words, Tsar Bomba was about 1,325 times stronger. Its incredible power came from nuclear fusion, the same energy-producing reaction that powers the sun.

In the film, the huge bomb is seen being loaded onto a railcar for transport to the far north, where it arrives under the guise of a typical boxcar at Olenya Air Base, just south of Murmansk.

At the airport, aircraft are being loaded up with test equipment, including tons of cameras on both a specially modified Tu-95V bomber (NATO reporting name “Bear”), painted all-white to reflect the nuclear flash, and a Tu-16 bomber that will serve as its tailplane. The sight of the huge bomb underneath the bomber is almost comical, and when it drops over the test site on Novaya Zemlya, a parachute is used to slow its descent and buy the aircraft time to escape its destructive blast.

The Tu-95 was at an altitude of roughly 34,000 feet when it dropped the bomb, which detonated about 13,000 feet above the ground to minimize radiation.

The film then captures the moment of detonation from several points of view, including on the ground and onboard the Tu-95V. The colossal explosion created such a mushroom cloud that it towered 6.2 miles over the island, and the blast was visible 621 miles away on the mainland. The bomber, which had only made it 28 miles away by the time the bomb exploded, recorded the horrifying fireball and mushroom cloud, which eventually reached 56 miles across.

According to the film, the blast was a “clean” bomb because of how high up it exploded, and shortly after the test, Soviet scientists can be seen flying out to the blast site in a helicopter, some of whom even walk around the area without protective equipment. The intense heat has melted away most of the snow at this site, which is just 1,200 miles from the North Pole.

The blast’s shockwave was immense, with wooden structures being destroyed and windows broken hundreds of miles away. Thankfully, Product 202 was never used in conflict, nor was such a powerful bomb ever constructed again, although Soviet Premier Nikita Khrushchev boasted that the design was technically capable of a blast twice as large.

On Anniversary of US Bombing, Nagasaki Mayor Calls for Nuclear Weapons Ban