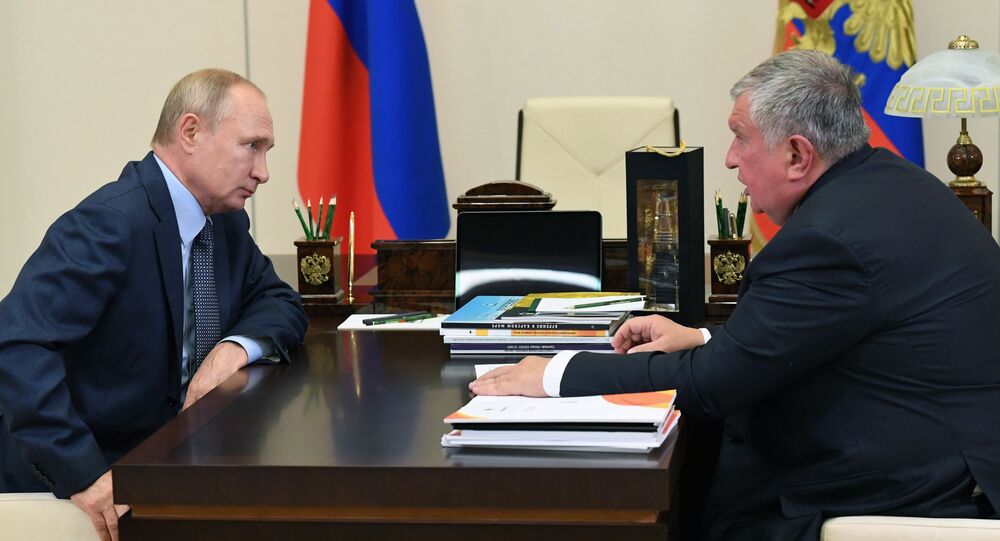 Better Than the Middle East: Vladimir Putin Receives a Bottle of 'Premium Oil' From Russian Field

Russian President Vladimir Putin is no stranger to getting peculiar gifts from his colleagues and counterparts from all over the world. But he has probably never received a present quite like this before.

Igor Sechin, the head of one of the largest companies in Russia Rosneft, gave Vladimir Putin a bottle of what he described as “premium oil”, during their bilateral meeting on Monday, where they discussed the company’s operations during the coronavirus pandemic.

The glass bottle received by Putin contained the first ever oil produced at the 31st well of West-Irkinsky field, which is located in Russia’s Krasnoyarsk Krai.

Rosneft’s CEO described the oil’s characteristics as “incredible” due to the low concentration of sulfur, coming in at just 0.02%.

But the head of oil company replied that this one is “even better”.

“Of course it's better”, Putin joked in response.

​According to Sechin, this oil was produced “without any additional stimulation during an exploration work” and has a high level of barrelization.

Last October, Rosneft won a tender for exploration of the West-Irkinsky oil and gas field. The company is controlled by the Russian government through the Rosneftegaz conglomerate, and is estimated to be the third largest national oil company in the world.